George Herbert Walker Bush, former President and Vice President of the United States, a World War II veteran, director of the CIA, envoy to China, chairman of the Republican National Committee, ambassador to the United Nations, a devoted husband to the late Barbara Bush, and father to George W, Robin, Jeb, Neil, Marvin, and Dorothy, has passed away at the age of 94.

Bush’s father, Prescott Bush, was a banker and politician, who provided his family with a comfortable life in New England. H.W. would get his first taste of service when he joined the U.S. Navy as the youngest Navy pilot in the country, serving until the end of World War II. 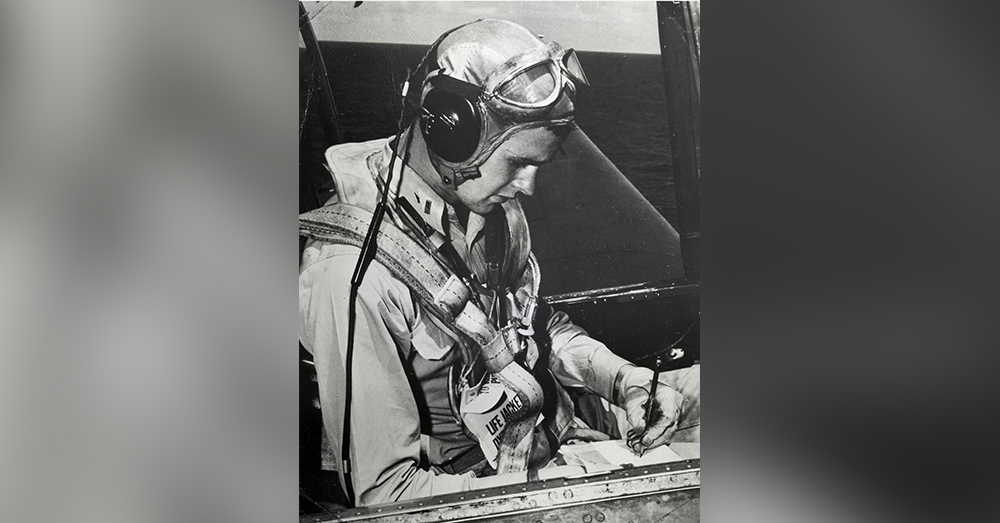 According to the Smithsonian, he flew 58 combat missions, once being nearly shot down by Japanese anti-aircraft guns. Bush would leave the military with three Air Medals and the Distinguished Flying Cross. 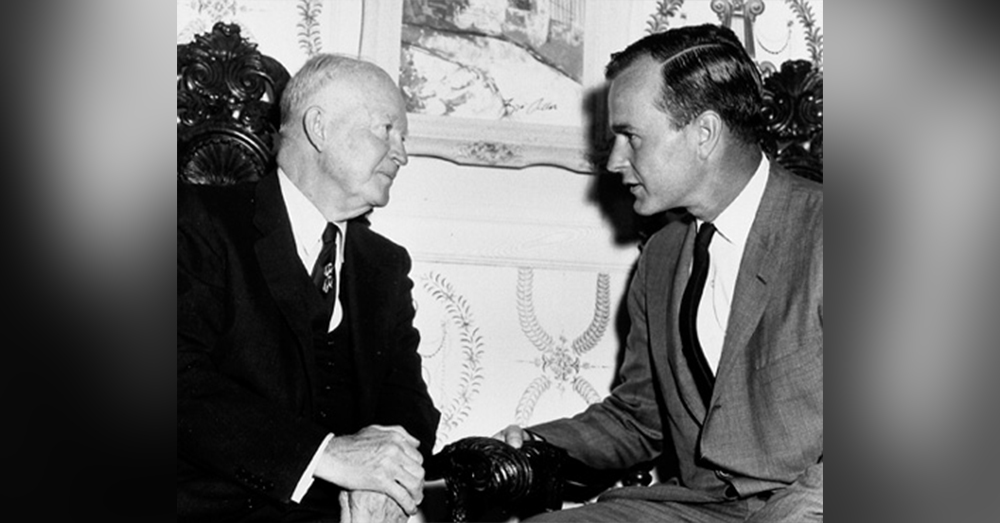 Bush would follow in his father’s political footsteps, garnering no shortage of accolades, yet he faced setback at nearly every stage of achieving them. He was elected to the U.S. House of Representatives in Texas’ 7th District in 1967. On Richard M. Nixon’s advice, he ran three times for a Senate seat, which he never achieved.

Nixon instead made Bush ambassador to the United Nations.

While serving as chairman of the Republican National Committee during Nixon’s presidency, Bush was prompted to ask for his leader’s resignation after the Watergate scandal. He then sought after the role of Vice President to Gerald R. Ford, though Ford chose Nelson Rockefeller and made Bush director of the CIA, instead. 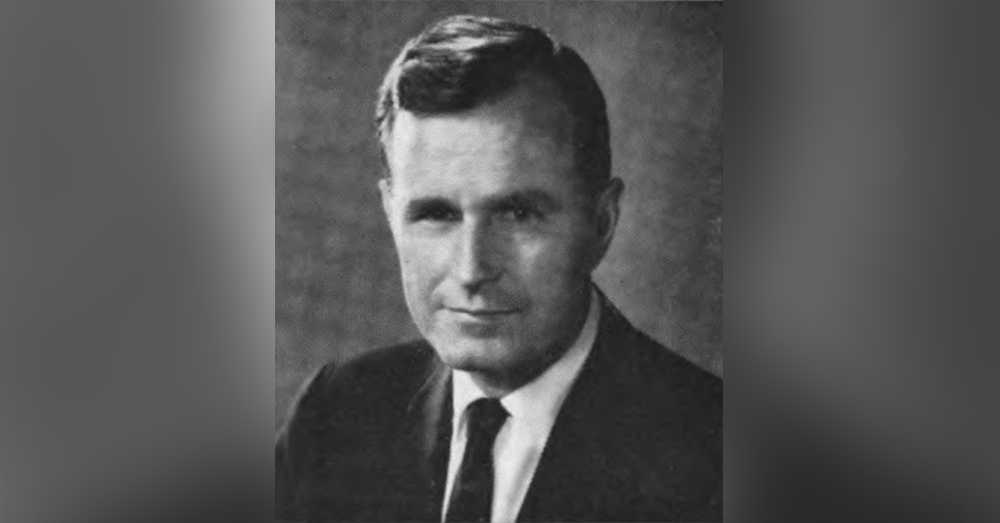 When Jimmy Carter took office in 1977, Bush was once again displaced.

Bush ran a failed campaign for president in 1980, when Ronald Reagan took the election by a landslide. Bush would not be shut out, however, as Reagan chose him for Vice President.

H.W. finally got his time in the Oval Office when he defeated Michael Dukakis in 1988. 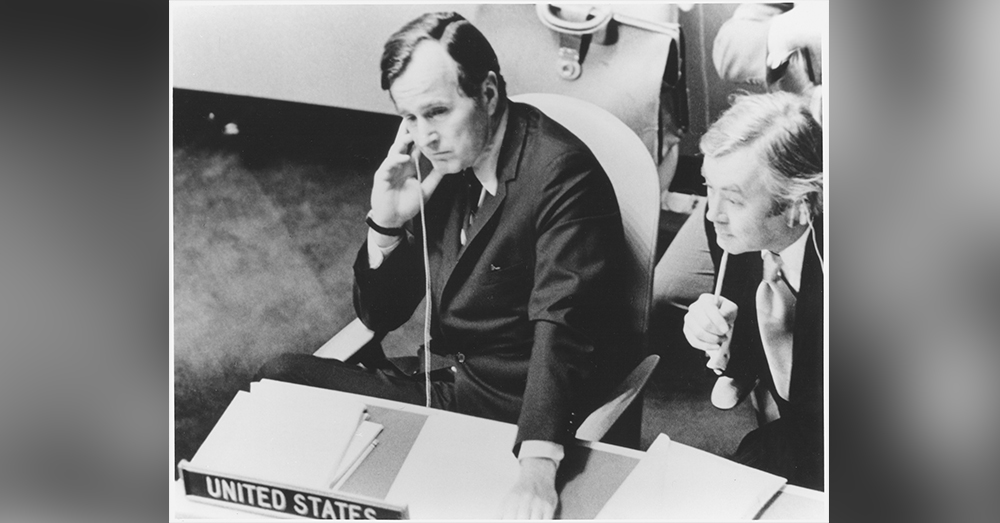 Source: Wikimedia Commons
Bush as ambassador to the United Nations, 1971.

As the 41st president of the U.S., Bush was instrumental in bringing his country, and the world, closer together by ending the Cold War and the threat of mutually assured destruction. He worked with Mikhail Gorbachev, and his successor Boris Yeltsin, after the fall of the Iron Curtain. 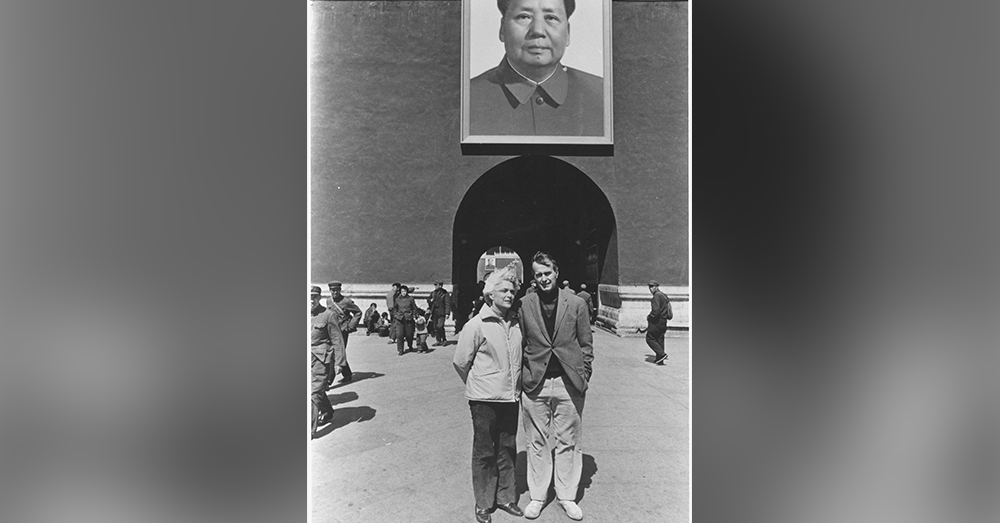 Source: Wikimedia Commons
Bush as U.S. Liaison to China, circa 1975.

Both leaders of former Soviet Russia praised Bush for his kindness and honesty.

“It was a time of great change, demanding great responsibility from everyone,” Gorbachev told the Interfax news agency after hearing Bush had passed. “The result was the end of the Cold War and nuclear arms race.” 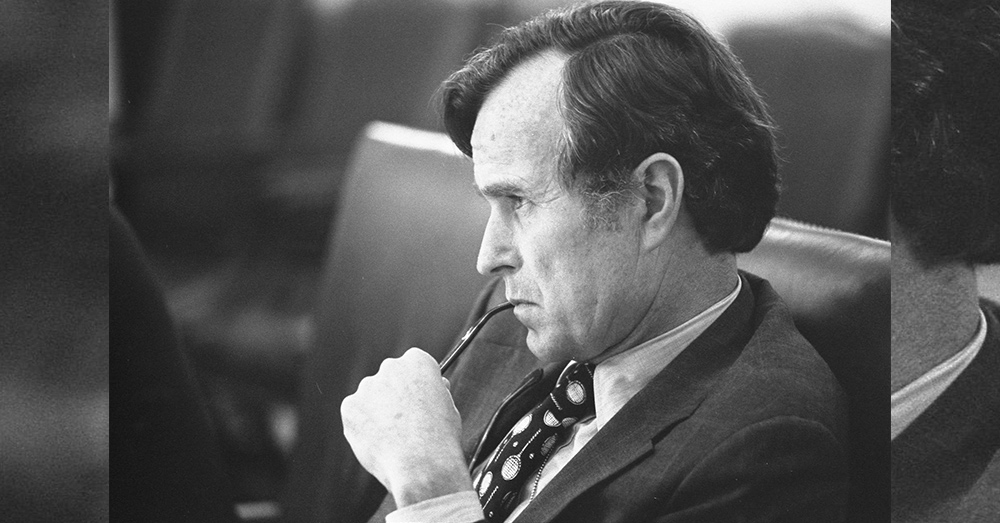 As he worked to solidify international relations, Bush faced contention from several groups of Americans during his presidency. Claims of racial prejudice were made after his election campaign ran an ad claiming escaped convicts would run rampant throughout the U.S. if his opponent Dukakis were elected. Even greater pressure came from those who felt the Bush and previous Reagan administrations had made no efforts to address the AIDS crisis in the U.S.

Reagan era tax cuts led Bush to take back his “read my lips” campaign promise not to raise taxes, contributing to his defeat in the 1992 election to Bill Clinton. 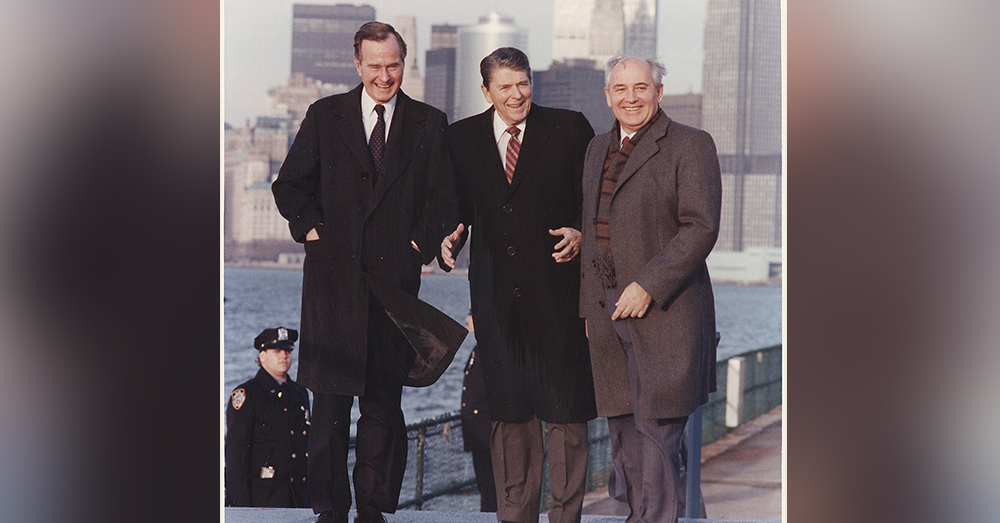 Source: Wikimedia Commons
International policy with the Soviet Union was a critical component of the political landscape in the late 1980s. Vice President Bush can be seen here standing with President Ronald Reagan and Soviet leader Mikhail Gorbachev, on the New York City waterfront, 1988.

Bush wasn’t content resting on his laurels after the one-term presidency, and found another way to serve.

Bush was born with privilege, but he never let that lead his decisions, his colleagues would say.

“He was raised not to gloat, no matter how much it might have been tempting to gloat,” former Secretary of State Colin Powell, a retired general and former chairman of the Joint Chiefs of Staff under Bush, told NPR. 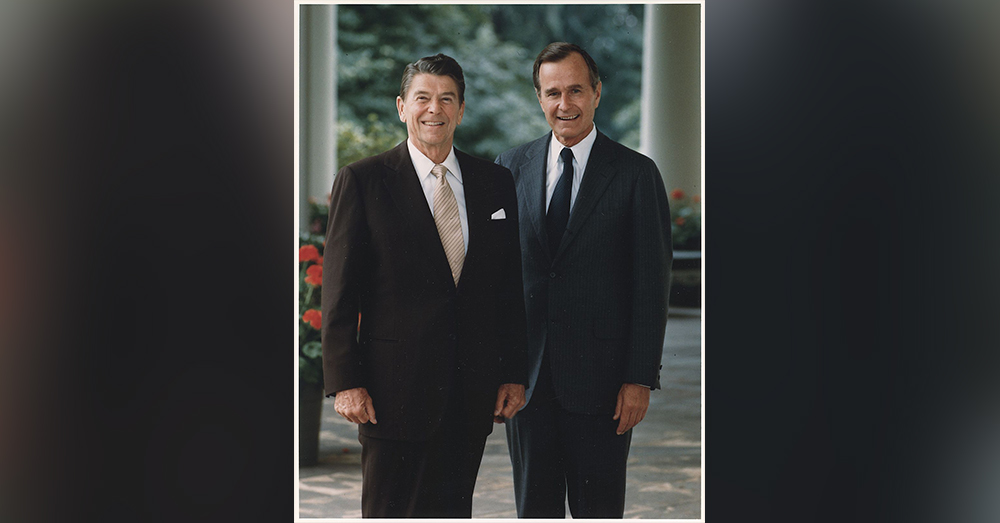 That modesty ran through Bush’s life like a streak of gold, even in his younger years as a student at Yale. As NPR reports, it was Bush’s mother who instilled those values in him.

“I just want to get up into heaven, and I don’t get there by bragging on myself; my mother taught me that years ago,” he told TV reporters during a fishing trip. 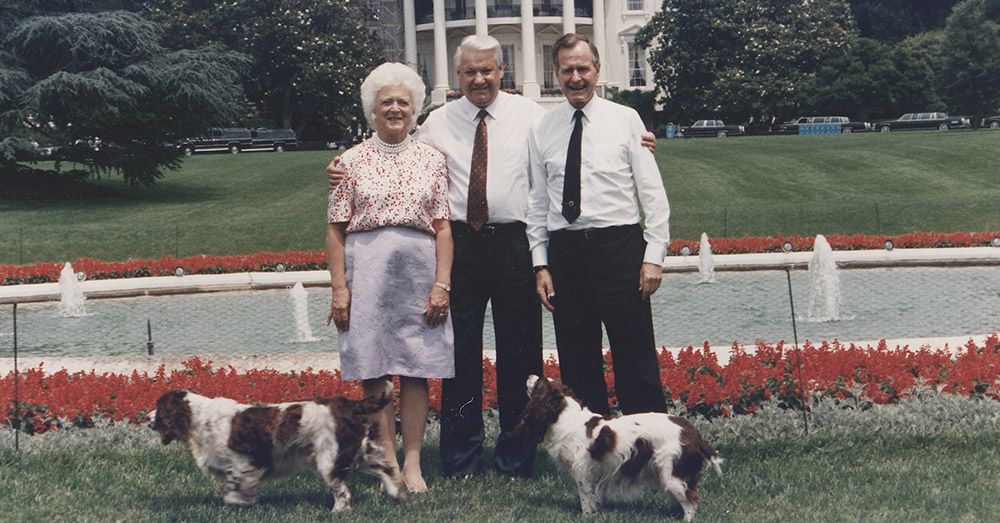 Bush, having lost his wife in April 2018, enlisted the help of a service dog, named Sully. The two shared only a few months together before the elder statesman passed, but there is no doubt the dog will remember the kindness and compassion of his former owner. 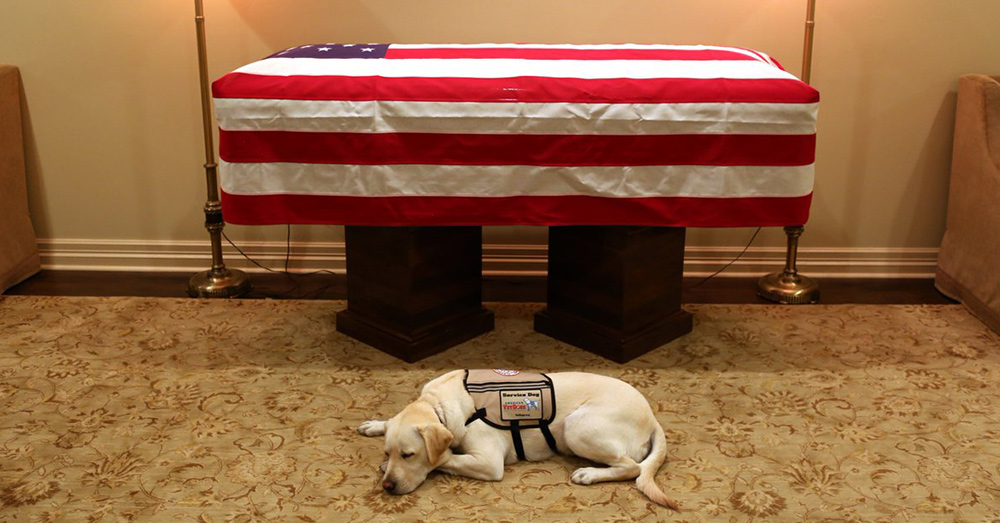 An image of Sully laying down in front of Bush’s casket expresses that fact more clearly than words could ever do. 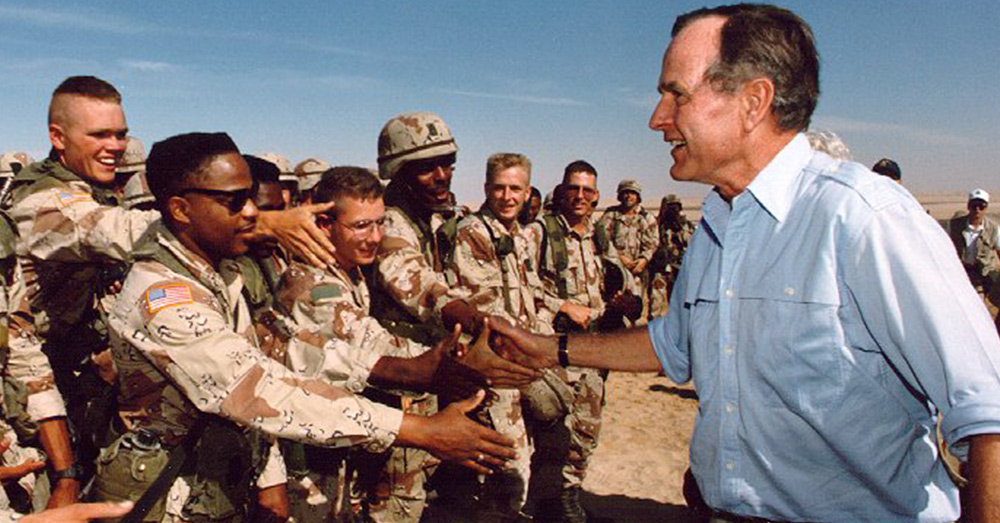 “When I think of George H. W. Bush,” former Ambassador R. Nicholas Burns, who was Bush’s director of Soviet affairs and served under Republican and Democratic presidents told NPR, “I think of the quintessential president you could admire because of his character, his judgment, the respect that he showed people, the enormous personal integrity. I think of our situation now, and, you know, boy, we were so lucky to George Bush at that critical moment in history.”

Young Girl Saved By Military Medic, One Dead After Chaotic Black Friday Shooting: Click “Next” below!