But set Lee, or any seasoned pilot for that matter, on the tail of a fighter jet controlled by artificial intelligence and you’re sending them right into the danger zone.

An A.I. pilot named ALPHA, created by Nick Ernest and Psibernetix at the University of Cincinnati, evaded Lee and took him down in each simulation. Afterwards, Lee credited the simulation as the “most aggressive, responsive, dynamic, and credible A.I.” he had ever seen.

“I was surprised at how aware and reactive it was,” he said. “It seemed to be aware of my intentions and reacting instantly to my changes in flight and my missile deployment. It knew how to defeat the shot I was taking. It moved instantly between defensive and offensive actions as needed.”

It’s not just a fun computer game anymore. It’s the next generation in air combat.

“Sure, you might have gotten shot down once in awhile by an AI program when you, as a pilot, were trying something new, but, until now, an AI opponent simply could not keep up with anything like the real pressure and pace of combat-like scenarios,” Lee said.

According to Popular Science, ALPHA relies on a method of fuzzy logic called a “genetic fuzzy tree” to determine the best course of action. Similar to the human thought process, larger tasks like successfully taking down an opponent in a dogfight are broken down by ALPHA into smaller ones, like flight pattern, weaponry, and defensive maneuvers. But much unlike its human target, A.I. can resolve these decisions in nanoseconds, over 250 times faster than it takes to blink.

That makes for one tough top gun to take down.

“I go home feeling washed out. I’m tired, drained, and mentally exhausted,” Lee said of his training with ALPHA. “This may be artificial intelligence, but it represents a real challenge.”

What’s even more impressive about ALPHA is its portability. It took the processing power of a supercomputer for Google DeepMind’s AlphaGo to defeat a human opponent. ALPHA runs on a desktop computer. 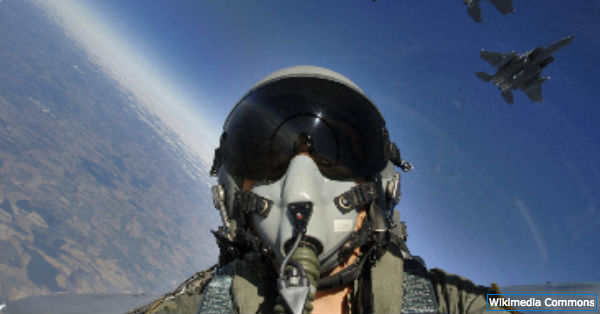 “ALPHA shows incredible potential, with a combination of high performance and low computational cost that is a critical enabling capability for complex coordinated operations by teams of unmanned aircraft,” said a lead engineer at the Air Force Research Laboratory.

While ALPHA is redefining air combat, there are some who still have what it takes to fly the old fashioned way. Follow this link to read more about Jack Dorshaw, whose service to the nation as a military pilot encompassed three of the wars of the 20th century: WWII, Korea, and Vietnam. Not only that, but Dorshaw is 96 years old and still flying.