This past week I had the privilege of meeting and talking with Francois (Frank) Joseph Richer, one of the few remaining WWII veterans who served on the USS Bunker Hill. He was a crewmember on the USS Bunker Hill during his entire enlistment in the Navy. He was aboard her through most of the ship’s main engagements in the Pacific Theater of WWII.

Richer was born in New Bedford, Massachusetts in 1925 to French Canadian parents and spoke French for the first seven years of his life. He has fond memories of his growing up in New Bedford. His dad was a blacksmith and built the house that the family lived in with his own hands and the help of a friend.

He left high school before graduating and when he turned 18, he joined the Navy. He went to boot camp in Newport, Rhode Island, and was trained as a “Water Tender,” or Waterman. After his training, he was assigned to the USS Bunker Hill, where his job was to produce the steam for one of the four huge boilers that drove the pistons of the two huge engines that propelled the ship. 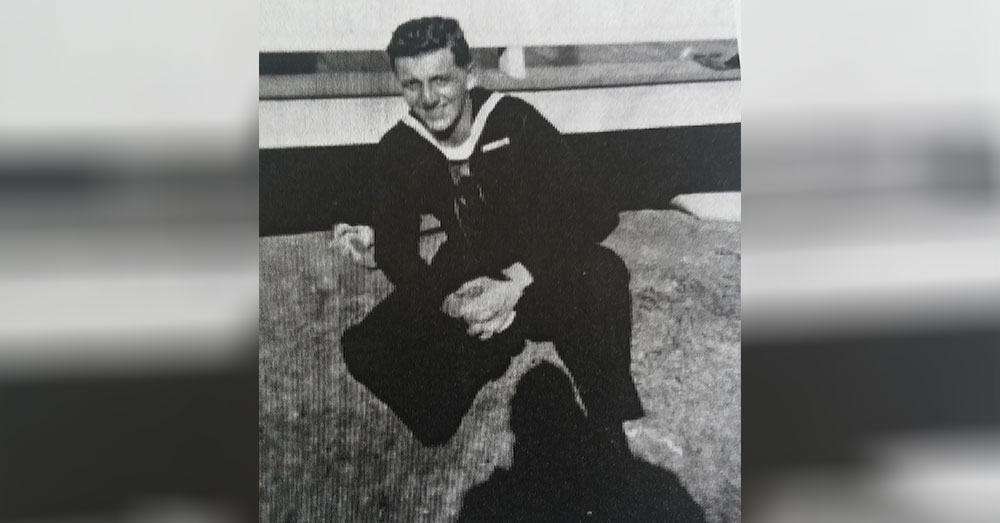 They had to heat up gallons crude oil (the ship carried 3 million gallons) to boil the water that created the immense volumes of steam necessary to power the 4 Westinghouse geared steam turbines that drove that huge ship through the water.

She could do 33 knots at full speed.

Frank Richer’s story aboard the USS Bunker Hill, is one of hard work carried out in the bowels of that huge and very important ship. He told me about how his crew would work four-hour shifts around the clock. The work keeping up the steam for the big engines was hot, dirty and lit only by the bare electric light bulbs down there.

Every day they worked, they ate, and they slept. That was their routine 24/7. He told me that the ship was so big and had so many crew members that he would be amazed walking the narrow passageways to the ship’s mess and other places he would pass people, other crew members, that he had never seen before.

An aircraft carrier is a floating city in many ways. The different crews, ratings, and professions all have their specific responsibilities in different quarters of the ship, so most of one’s shipmates would be anonymous to one another.

Richer was a “Snipe,” Navy parlance for those who work below decks. They were the sailors that, like Frank Richer, kept the ship’s necessary mechanical elements running and maintained. Airdales were those involved with the air wing aboard the ship. They managed the flight deck’s landing and take-off operations, armed and fueled the planes. Each of the divisions had their officers and crews. As complex a machine that an aircraft carrier is, it runs like a well-oiled clock, all of its various elements working in harmony, in every kind of circumstance. The Bunker Hill had a detachment of U.S. Marines aboard as well. They manned the defensive weapons on the carrier.

Frank Richer was down at his duty station on the morning of May 11, 1945 when the kamikazes hit the flight deck above. He could not see what the flight deck crews and the sailors and officers in the island superstructure topside were doing. He said he could hear the explosions and could feel the great ship shudder from the impact and the explosions. The flight deck became a hell on earth very quickly. The flames were intense and the smoke from the burning aviation fuel and the exploding munitions billowed in thick dirty plumes hundreds of feet above the ship.

Down below was its own kind of hell.

The ship was suddenly filled with thick, toxic smoke and men below began dying from smoke inhalation. Richer and his crew found themselves engulfed in the smoke. They started hollering for breathing masks. Richer was the last one to get one. One of his crewmates, shouted for one more mask for a guy whose nose was in the bilge that was filling up that area. Richer was that guy and he got the last mask. When they tried to move to an area above where they could get some fresh air, Richer says that they had to claw their way through the smoke and had to climb over the bodies of already dead crewmembers.

Because of his necessary role in keeping the power to the engines, he and his crew were back at it as soon as the fires were brought under control and the smoke no longer posed a danger. He never really saw any of the carnage, damage, or the work that went on topside. He and his mates were too busy at their own stations, working in round-the-clock shifts. He told me that he was able to go topside once and witnessed some of the burial-at-sea ceremonies that were carried out over the days after the kamikaze attacks. He said they were going overboard two at a time.

When the fires were out, the ship was listing heavily, but still underway. Richer said that he and the rest of his crew and the other crews that manned the 4 boilers aboard, kept the ship going. According to Richer, they were only able to do about 3 knots, but she was moving. It took them weeks to limp back to Bremerton, Washington for repairs and refittiing. She would still be at the dry docks in Bremerton when the war ended.

While the USS Bunker Hill was at Bremerton, Richer met a young woman by the name of Martha Harn in Seattle. She would later become his wife. He was sent by ship back to Boston, where he was discharged from active service as a Water Tender 3rd Class on the 5th of April, 1946. He would marry his girlfriend and live briefly back in New Bedford, MA, then they would return to Seattle where he owned a very successful Chevron station in Ballard near Fisherman’s Terminal, then another station in Edmonds, WA where their three children would graduate from high school. 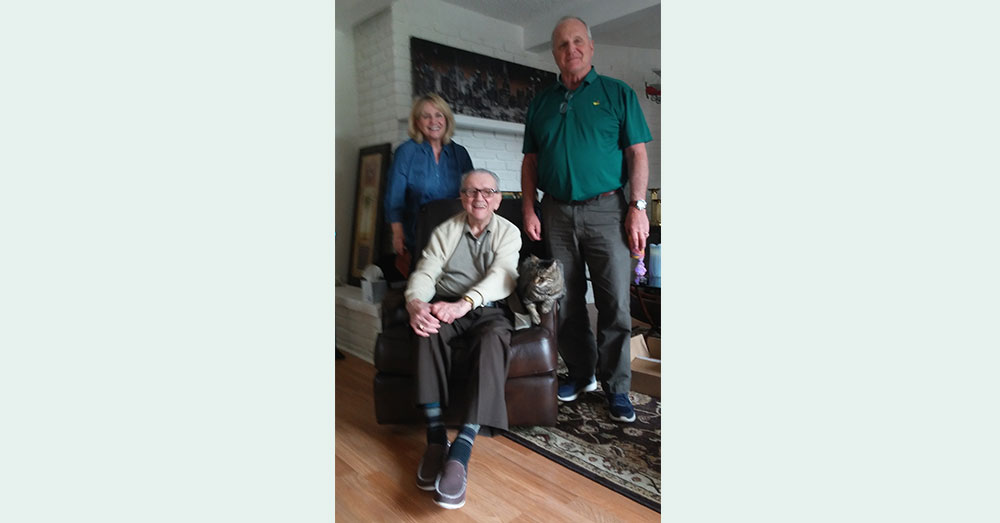 Frank Richer was one of the Greatest Generation. At 92 years of age now, he remains sharp and in possession of a great sense of humor and a real love of life. As he told me his story it was clear in his eyes and the occasional tears that would well up with all the returning memories, that he still had a deep emotional attachment to the USS Bunker Hill and his fellow crewmen.

His eyes lit up when he told me that one of his fellow shipmates on the Bunker Hill was none other than Paul Newman, who would become one of America’s great actors and philanthropists. He recently was able to go on one of the WWII Veteran Honor Flights sponsored by Southwest Airlines and the State of Nevada. It was a powerful and very moving experience for him.

It was men like Frank Richer that were the backbone, the muscle, and the determination behind our successful war efforts against Japanese Imperialism and Nazi Fascism.

After the war, they took their skills and that dogged determination with them into civilian life, making America the strongest, most productive, and wealthiest nation on earth. They were not famous. Indeed, most of them were anonymous to all but their families, friends and the acquaintances of their daily lives. But it was men like Francois Joseph Richer whose noble character, and determined and dedicated will to do the necessary hard work before them, whether it was down in the bowels of the USS Bunker Hill during the war, or later, in the gas stations and workshops, and factories all across this land that made this country great.

They deserve the moniker “The Greatest Generation.” We are all challenged to remember what they did and to imitate, indeed, to recover the kind of character and inner strength that they brought to all that they did.

The Veterans Site wishes to offer its deepest respect and thanks to Water Tender 3rd Class,Francois Joseph Richer, to his shipmates on the Bunker Hill, and to all of the remaining WWII veterans among us. We owe you so much. We will never forget what you did for us in war and in peace.