The USS Bunker Hill (named after the famous Revolutionary War battle in Boston), was one of the big aircraft carriers to carry the fight to the Japanese in the Pacific during WWII and it had quite a reputation.

The Bunker Hill was built for war and war is what she did. She participated in the air support for most of the important amphibious landings across the Pacific. Her planes pounded and prepared places like the Marshall Islands, Truk, the Marianas (Guam, Saipan, and Tinian), Palau, Yap and the Caroline Islands and many more. And she was in the middle of the action in the titanic Battle of the Philippine Sea, just west of the Marianas, where about 476 Japanese warplanes were shot down, nearly all of them by the Navy’s Grumman F6F Hellcat fighters, many of them off of the Bunker Hill.

In November of 1943, along with two other aircraft carriers, the USS Essex and the USS Independence, her planes participated in a major raid on the Imperial Japanese Navy naval base at Rabaul. She was reunited there with her original air wing of VF-17 Corsairs. Those Corsairs had been transferred off of her earlier and were land based at Ondonga Airfield in the Solomon Islands. After this engagement, she set a course for the Gilbert Islands to cover the invasion of Tarawa.

On June 19, 1944 she was damaged when a Japanese bomb exploded on her scattering shrapnel across several decks. Two sailors were killed in that incident and some 80 were injured. But she continued to fight with her antiaircraft weapons, shooting down a number of the Japanese attack planes. In November of 1944, the Bunker HIll went to Bremerton, Washington for much needed repairs and weaponry upgrades. She left Bremerton on January 24, 1945.

In 1945, the USS Bunker Hill was the flagship of Task Force 58, commanded by Vice-Admiral Marc A. Mitscher. The Chief of Staff was Arleigh Burke.

The Admiral’s staff were all aboard the Bunker Hill. Before the battle for Okinawa, they were joined by the battleship USS Missouri with Admiral “Bull” Halsey aboard. That ship would later be the stage where the Japanese surrender would be signed. These warships and others then participated in the Battle of Iwo Jima and the 5th Fleet raids on the Japanese mainland islands of Honshu and Nansei Shoto between February and March. In April, the planes off of the Bunker Hill and much of the rest of the 5th Fleet participated in the aerial support for the Battle of Okinawa.

On the morning of May 11, 1945, while supporting the Battle of Okinawa, the Bunker Hill was struck by two Japanese kamikaze planes. They had emerged from some heavy cloud cover diving toward the big ship’s flight deck. The first one dropped a 500-pound bomb as it hurtled toward the ship’s flight deck. The bomb penetrated the flight deck and then exited her port side at the gallery deck level, before exploding in the sea. 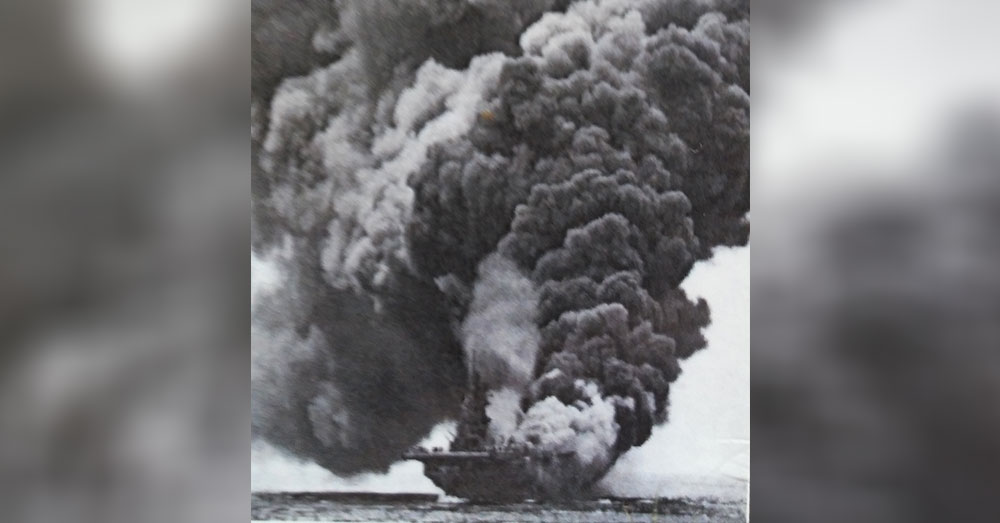 The kamikaze pilot continued his dive striking the flight deck with his plane destroying many parked planes already full of fuel and ammunition. The result was a series of huge, smoky fires. Only about 30 seconds later the second Zero began to drop toward the burning Bunker Hill. It kept coming through the heavy hail of anti-aircraft fire from the Bunker Hill’s defensive weapons, letting loose another 500-pound bomb and following it into the wounded ship’s flight deck. That bomb penetrated the flight deck and exploded in the pilot’s ready room. More gasoline was ignited and the fires caused several more explosions.

The mighty ship was severely damaged and crippled. The loss of life was tremendous, listing 346 sailors and airmen killed, 43 missing, and 264 wounded. Three officers and nine enlisted men from Admiral Mitscher’s staff were among the casualties. 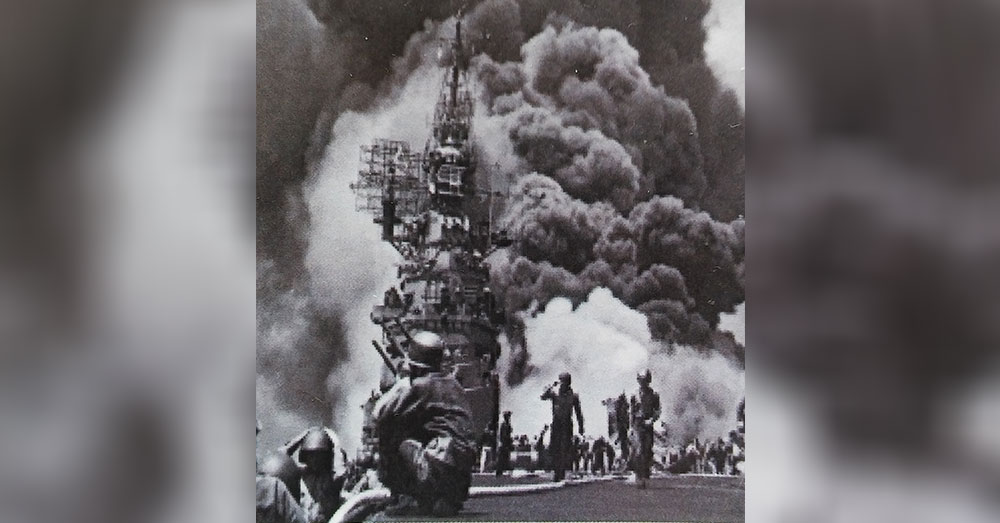 Due to the damage of the ship and the continuing fires, the Admiral relinquished command of the ship by visual signal and he and the rest of his staff were transferred first to destroyer USS English, then to the USS Enterprise, which then became the flagship of the fleet.

As the rest of the story continues, we revisit the veterans of the USS Bunker Hill to hear their story.