The philosopher George Santayana once wrote, “Even in the midst of war there is room for thoughts of love.”

Fr. Emil Joseph Kapaun gave meaning to this idea while serving as a Catholic Chaplain during the Korean War with Headquarters Company, 8th Cavalry Regiment, 1st Cavalry Division. Fr. Kapaun’s love for his men, and theirs for him, was revealed to the highest degree during the events they endured together in the winter of 1950. Both on the battlefield and later, in the Chinese POW camp they were marched to after being captured, Fr. Kapaun modeled the kind of heroic love that only combat veterans, and in this case, prisoners of war, can have for one another.

Military Chaplains are trained to meet the spiritual needs of all the men and women in their care, no matter their particular faith, or religious background. They are non-combatants who, during times of war, are often with their men right in the thick of things providing comfort, prayer, and support. They pray with and for their men and women, hear their fears and doubts, even their confessions, always providing spiritual guidance and support. They go to the front with their units armed only with their faith and their love for the men and women in their care.

Fr. Emil Kapaun’s actions during a particular battle in Korea in the winter of 1950, and subsequently as a fellow POW, modeled the deep commitment and courageous love these Chaplains have for their fellow soldiers. Fr. Kapaun was a man of great faith, who loved and cared for his men more than his own life. 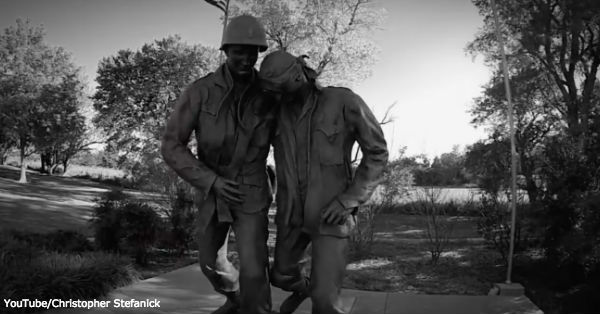 Fr. Kapaun was awarded the Medal of Honor in 2013, 63 years after his death in the POW camp in Korea. When he was being taken by his captors to the “death house” he was seen blessing his captors and was heard repeating the words of Jesus on the cross, “Father, forgive them for they know not what they are doing.” (Luke 23:34)

The Veterans Site honors the memory of Fr. Emil Joseph Kapaun and his dedication to his fellow soldiers of the 8th Cavalry Regiment of the 1st Cavalry Division. His faith and his love for his men inspires us all.