This is one of those stories that are weighted down with melancholy. It has equal parts of sadness, joy, and closure in it. It began 72 years ago on the sandy beaches of the small South Pacific atoll of Tarawa. Over the period of only three days (November 20-23, 1943) the battle for that tiny atoll would become one of the bloodiest battles of WWII. The small atoll of Tarawa had a garrison of 4,500 Japanese soldiers. They had dug in and heavily fortified the island against such an attack and would put up a fierce defense of it when the Marines began to land. 18,000 Marines and Navy Corpsmen were sent ashore to take the island on November 20th.

As with so many military endeavors, things happened that were not prepared for. Those who made it to the beach found themselves facing brutal hand-to-hand combat.   In the course of those three days, 990 Marines and 30 Navy Corpsman and LCI drivers were killed in action, but the Marines were able to take the island. In this one 72 hour long battle, U.S. Marines suffered almost as many killed-in-action casualties as U.S. troops suffered in the six month long campaign to take Guadalcanal.

520 of the Marines and Corpsmen who died on Tarawa are still listed as MIA.  A private group called History Flight, which is based out of Marathon, Florida, has used ground penetrating radar to find the remains of some 139 Marines. On July 26, 2015, History Flight brought 36 of them on the first leg of their return home to Joint Base Pearl Harbor-Hickam in Honolulu, Hawaii.

The identification process is now underway under the auspices of the Defense POW/MIA Accounting Agency. When the identifications are completed, the Marine Corps will return the remains to their families. A military ceremony was held there to mark their return on Sunday, July 28th, 2015.

Tarawa is one of the many important battles that cover the pages of Marine Corps history. Indeed, it is one to the most significant of them.

General Joseph Dunford, Commandant of the Marine Corps was pleased to learn of their return and said, “[Tarawa] was also the first contested landing against a heavily fortified enemy, and a turning point in the development in our amphibious capability. The lessons learned at Tarawa paved the way for our success in the Pacific campaign and the eventual end to the war.”

Though the parents and probably most of the siblings of these Marines have died without ever having had the closure of seeing the bodies of their Marines come home to be buried in familiar ground, they will be coming home to families who have lived with their stories passed on through family tales. 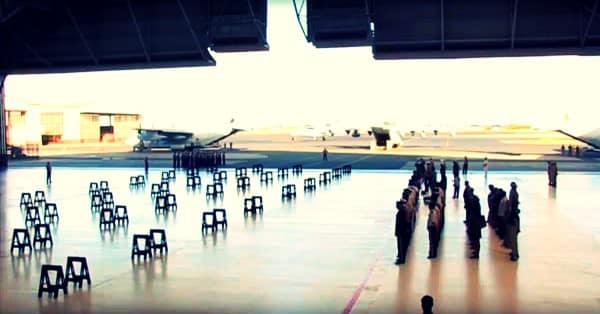 adds its “Welcome Home” to these good Marines. We have missed you for too long and we are thankful that you can now be received back into the welcoming arms of your family and this grateful nation. You were the best among us. We say “Semper Fidelis” and “Ooorah” to our returning Marine Corps and Navy Corpsmen brothers. Rest, brothers…

You are finally home.