Since this story was originally published, the Sterling Heights apartment complex in Greeley, Colo. has issued an apology to tenant Samuel Adams for asking him to remove the American flag he had displayed on his balcony.

“In response to the notice you received last week regarding the displaying of an American flag on your balcony, we sincerely apologize for the request to remove it and the reaction this has caused,” wrote Drake Powell, principal of the property group that manages the Sterling Heights complex. “The notice was not intended to be un-American, unpatriotic or insensitive to all that our great country stands for.”

Most history books miss this detail, but there was once a day when even Samuel Adams was admonished for hanging the American flag from his balcony.

Samuel Adams, of Greeley, Colo. found a letter from his apartment complex Wednesday, June 22, alerting him that the flag hanging from his balcony was against the complex’s policy and had to come down.

Please be advised that it has come to management’s attention that you have an American flag on the balcony/patio area. Your signed Community Policies states, ‘The use of balconies and patios for the purpose of storage and/or laundry drying is prohibited. Breezeways are not to be used as a patio or storage. Please do not clutter with personal belongings. Balconies and patios must be maintained in a neat, clean and attractive condition. Outdoor and/or patio furniture is welcomed on your patio or balcony only. Gasoline and other hazardous materials are not to be stored in the apartment or storage area. Refrain from having dead plants, boxes, or garbage on balcony/patios at any time.’ We appreciate your prompt attention and cooperation in this matter. If you have any questions or concerns, please feel free to contact myself or the office at any time.

Adams was not pleased.

“I wanted to be a patriotic American and give tribute to our Founding Fathers and our veterans, and to have [management] say the flag is inappropriate or comparable to trash is reprehensible to me,” Samuel Adams told Fox News.

Adams’ apartment complex contends it meant no offense, but simply seeks to enforce its decoration rule per the terms of the lease agreement.

“Sterling Heights seeks to be fair to residents by limiting displays as there could be signs, flags, or decorations that may be offensive and disruptive to the community,” Sterling Heights Community Manager Pamela Buchanan told the Greeley Tribune.

“We really try hard to keep a nice, neat community and are diligent about our efforts to keep uniformity in appearance in the areas visible to others,” Senior Regional Manager Amie Robertshaw said. 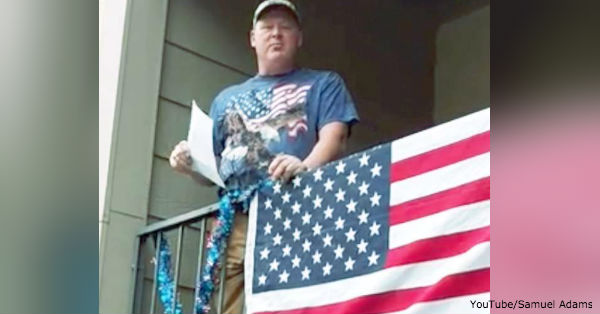 Samuel Adams intends to fly his American flag from his balcony, even if it means he faces eviction.

The complex will allow flags to be displayed for the Fourth of July, but every other day of the year remains under restriction. Adams is far from swayed, however. He has said an outpouring of online support has confirmed his feelings of protest.

“I thought this was just going to be a whisper but it has avalanched,” he said. “I’m the kind of guy that when I see a man or woman in a uniform, I go up to them and say, ‘Thank you for your service.’ I gladly accept the responsibility given to me of standing up for the veterans and families that have reached out to me.”

There’s no denying Greeley’s Samuel Adams is proud of the Stars and Stripes, something he shares with many Americans — including the late Johnny Cash. Follow this link to see how the Man in Black pays tribute to Old Glory.