Many Vietnam War pilots owe their lives to Chief Master Sgt. Duane Hackney. As a pararescueman, Hackney saved many pilots who had been shot down by enemy anti-aircraft fire over the course of three and a half voluntary years of service in Vietnam.

According to War History Online, Hackney was born in Flint, Michigan in 1947. He joined the Air Force in 1965 wanting to do pararescue work and that is what he did. On countless occasions he would descend into the thick jungle canopy that was so common to much of Vietnam, both North and South, to find and rescue downed pilots before the enemy could get to them. His skills and his incredible courage became known to the pilots and they knew that if they went down, America would come looking for them.

Many of those times, it was Hackney that was on the job.

Shortly after he arrived in country on his first tour, he took a .30 caliber bullet to one of his legs. This will give you a sense of this man’s character, he removed the bullet himself to avoid being medically evacuated. While we had technological and weapons superiority over the NVA, they were all too often successful in bringing down our fighter planes.

In every case, pilots and navigators would need to be rescued or they would find themselves unwelcome guests as POWs in Hanoi and other places. Hackney was instrumental in rescuing many of those who had gone down. Over the course of his tours in Vietnam he was also on five helicopters searching for downed pilots that would be shot down during those rescue efforts.

In February of 1967, Hackney was on an HH-3E long-range rescue helicopter, also known as a jolly green giant. It was his second rescue mission of the day and they were flying near the Mu Gia Pass in North Vietnam searching, once again, for a downed pilot. Hackney was lowered down into the thick canopy where he found the downed pilot and was able to get himself and the pilot hoisted back up into the helicopter. As the helicopter turned away to get back to safety, it was hit by 37mm flak, which started an intense fire on board the helicopter. Without hesitation, Hackney took off his parachute and put it on the rescued pilot.

He then had to move through the smoke to retrieve another chute for himself.

As he was putting it on the helicopter was hit again and thrown into an uncontrolled spiral. He was thrown out the door of the helicopter and despite the fact that he had not had time to buckle the chute, he was able to deploy it and did a soft landing, but he was in enemy territory. A second jolly green giant was able to locate him and this time, he was the one being rescued. He was awarded the Air Force Cross for his efforts on that mission.

Hackney would receive over 70 individual medals, awards, and commendations over his career in the U.S. Air Force. These would include beyond the Air Force Cross, 4 Distinguished Flying Crosses with combat Vs, a Silver Star, 2 Purple Hearts and 18 Air Medals.

He is the most highly decorated airman in U.S. Air Force history.

Hackney would serve 26 years in the Air Force retiring in 1991, but would die of a heart attack only two years later in 1993 at the age of 46. The training facility at Lackland AFB, near San Antonio, TX was named after him in 2006 and in 2009 he was inducted into the Michigan aviation Hall of Fame. 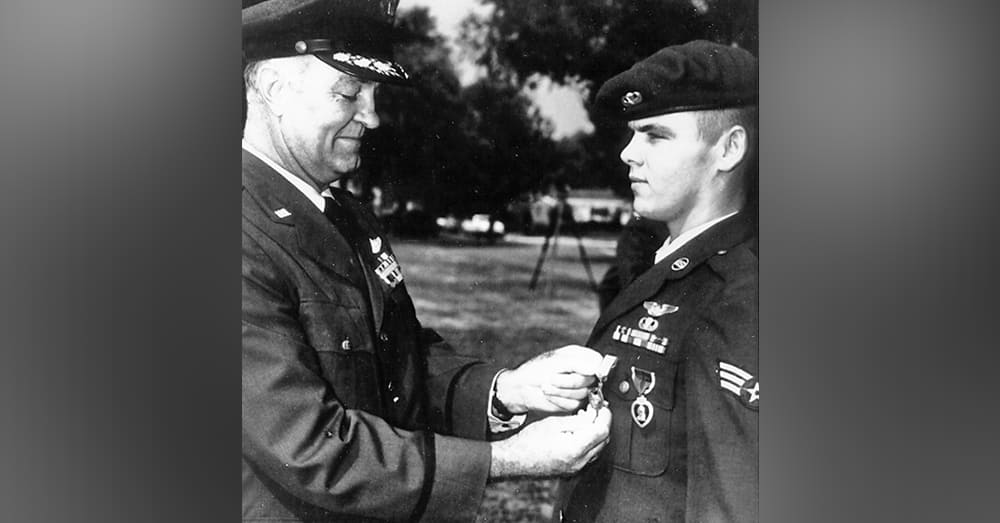 The Veterans Site wishes to add its respect to the memory of Chief Master Sgt. Duane Hackney. His courage and dedication in saving so many of our downed pilots from capture or death, will not be forgotten. He was a superior example of the Air Force motto, “Aim High.”

Chief Master Sgt. Duane Hackney is a highly decorated hero, but he’s not the only one to come out of the Air Force. When a heavily armed enemy soldier infiltrated an American base overseas, it took the heroics of an Air Force Tech. Sgt. to bring him down.

Click the button below and read more about Air Force heroes!