An unmanned U.S. naval drone testing current behavior in international waters within the South China Sea was found and taken by the Chinese Navy on December 15.

Navy Capt. Jeff Davis maintains that the remotely-operated ocean glider was one of two being retrieved by the USNS Bowditch, a civilian-staffed oceanographic survey ship. The 6-feet-long gliders propel themselves by changes in buoyancy, and report water conditions back to the U.S. Navy, controlled via satellite by non-military personnel from the Stennis Space Center in Mississippi.

“They typically travel just a few miles per hour and are tracked by oceanographic vessels such as the USNS Bowditch,” the Washington Post reports. “The data the drones collect is unclassified.”

Before the USNS Bowditch was able to grab this particular underwater glider, however, it was intercepted by a raft of Chinese sailors from a Dalang-III class rescue submarine. Radio contact was made with the Chinese, relaying the Americans’ order to return the equipment, but the submarine ignored all requests and absconded with the drone.

“It is ours. It’s clearly marked as ours. We would like it back, and we would like this not to happen again,” said Pentagon Spokesman Navy Capt. Jeff Davis.

Navy reports indicate the glider was captured at around 1:45 p.m. local time. Davis claims, as it relates to a lawfully conducted scientific survey, the seizure of this drone constitutes a breach of international law.

“It’s a sovereign immune vessel, clearly marked in English not to be removed from the water – that it was US property,” he says. 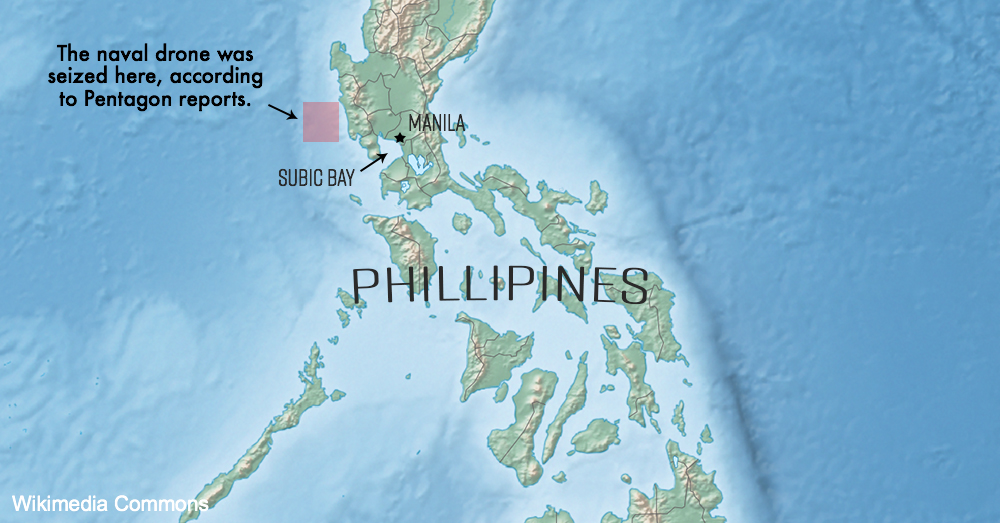 The actions of the Chinese Navy have raised the ire of Senator John McCain, who labeled the drone’s capture a “flagrant violation” of maritime law.

“China had no right to seize this vehicle,” the Republican senator from Arizona said. “And the United States must not stand for such outrageous conduct.”

Chinese officials finally agreed to return the drone on Saturday, Dec. 17, according to the Pentagon, drawing a less than concerned response from president-elect Donald Trump.

“We should tell China that we don’t want the drone they stole back.- let them keep it!” Trump tweeted before news of the drone’s retrieval had reached his office. “China steals United States Navy research drone in international waters – rips it out of water and takes it to China in unprecedented act.”

According to Pentagon press secretary Peter Cook, the drone’s return was facilitated through clear communication with the Chinese.

“We have registered our objection to China’s unlawful seizure of a U.S. unmanned underwater vehicle operating in international waters in the South China Sea,” Cook said. “Through direct engagement with Chinese authorities, we have secured an understanding that the Chinese will return the UUV to the United States.”

McCain said he has little hope for improvement in American-Chinese relations if a “strong response” to events such as these is not put forth.

“Freedom of the seas and the principles of the rules-based order are not self-enforcing,” he said. “American leadership is required in their defense.”

Our military’s full attention is indeed required in matters of international defense, but after those who’ve serve fulfill their duty and transition to civilian life, do they not still warrant ours? Measures being implemented in Utah have shown that veteran homelessness, a problem that plagues many other states, can be solved with easily replicated programs.

One homeless veteran is too many, especially when the solutions to veteran homelessness have been demonstrated with a resounding effect in some communities. Follow the link below and tell the Department of Veteran’s Affairs to put proven programs to work on a national level.

The U.S. Department of Veterans Affairs has the power to replicate effective solutions like Utah’s Housing First program in cities across the country. By coordinating communication between VA hospitals, local homeless shelters, and local Housing First administrators, the programs could be tailored to work within each community’s existing framework, finding veterans safe and secure homes quickly and with compassion.
Tell the United States Secretary of Veterans Affairs to increase funding and implementation of these programs.
Make a difference