Drill instructors have a reputation of being loud, mean, screaming machines that take raw recruits and turn them into the best of the best. Staff Sgt. Ryan Granados is one of those men, a senior drill instructor at Marine Corps Recruit Depot Parris Island, and he is used to having recruits listen to every word he says (or yells) and follow those instructions to the letter. In a new, hilarious video, you can see one instance where Granados doesn’t get the results he’s used to.

Staten Island Advance reporter Amanda Steen met up with Staff Sgt. Granados at Parris Island to learn from the drill instructor how to make a bed, or rack, in the proper military fashion. This is one of the very first things that new recruits learn when they get to boot camp. It teaches them discipline, uniformity, and precision. They must make their rack every morning and keep everything from the bed to their uniforms perfect.

But when the drill instructor tries to teach the young reporter how to make the rack the same way he would teach a new recruit, the results are so funny that they’re something to watch more than once! You can see the drill instructor trying his best to remain cool and calm while the reporter does a less-than-precise job of the task before her. Obviously Granados is forced to remain much more patient with Steen than he would with one of his recruits! 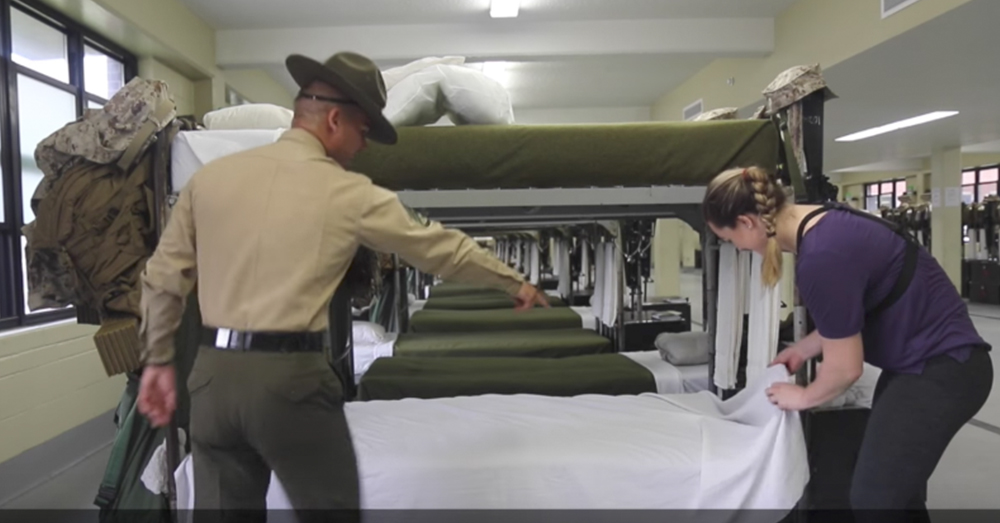 The video shows Staff Sgt. Granados giving the instructions on how to lay out and tuck the sheets on the bed. The lines must be perfectly straight, the folds at a precise angle, and the corners tucked in tight. The end result should be a wonderfully made bed, exactly the same as the rest in the barracks, with straight lines and a tight, tucked finish. What Steen gives him, however, is what he describes as “probably the worst rack I’ve ever seen.”

What also make the video so funny is the drill instructor’s expectation that the reporter will say “Aye, Sir!” to every command he gives… something she constantly forgets to do. If a recruit did the same thing, they’d likely have some extra push-ups to do, to say the least. Granados never gives up reminding her to say it, though, which makes the frustration even funnier. 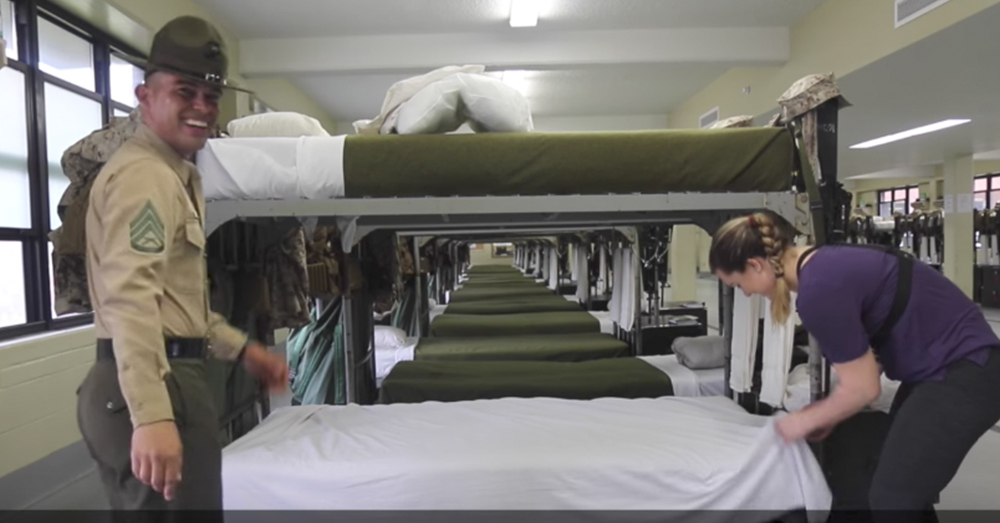 Drill instructors have the reputation of being tough-as-nails, no-nonsense, angry, screaming sergeants; and while that is a stereotype based largely on truth, they serve a vital role in the Armed Forces. Service members must be able to follow commands and know that the people serving next to them in combat are going to do the same. That all starts at basic training, where something as simple as making your bed properly is the foundation for carrying out more important commands later on in their service.

Taking on the challenge of having a Marine Corps drill instructor teach you how to quickly make a proper rack in the Marine style would be hard for anyone. Reporter Amanda Steen knew she wasn’t in for a picnic when she decided to learn from Staff Sgt. Granados. Luckily for all of us, she filmed the encounter, which can’t be watched without laughing. It’s great to see how the Marine keeps his composure too, though at times it’s hard to tell if he wants to scream or laugh, himself!

Watch the hilarious video below!