Desmond T. Doss received his draft notice in April of 1942 but his religious convictions were at odds with the idea of killing. He was given Conscientious Objector status due to his religious beliefs, yet, as strange as it may seem, he decided to remain in the Army only if he could be a medic.

Doss’ fellow soldiers would harass him for his religious beliefs but they would come to find out that there was more courage in this man than they could have ever guessed.

As a Seventh Day Adventist he took Saturday as a sacred day of rest from one’s labors. In his own mind, Doss determined that he could serve as a medic and work seven days a week, because, “Christ healed on the Sabbath.”

In the home he grew up in there was a framed picture of the Ten Commandments and the Lord’s prayer. The picture associated with the Sixth Commandment was of Cain holding a club over his brother Abel. That picture shaped his views about killing. He could not imagine how a brother could do that to his own brother. He thought about it a great deal and he came to feel in deep faith that Jesus was saying to him, “Desmond, if you love me, you won’t kill.” 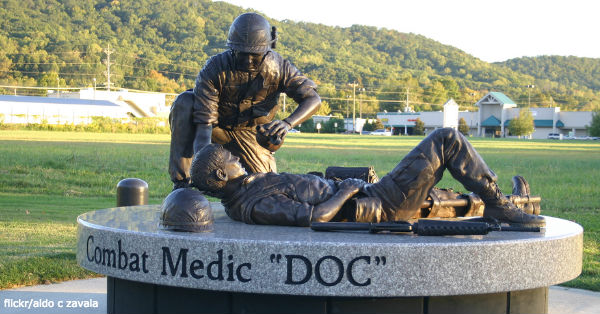 By the spring of 1945 Doss had gone ashore with the men of “B” Company, 307th Infantry of the Army’s 77th Infantry Division at Guam, Leyte, and in the Philippines, earning a Bronze Star on the way. He went ashore with them again on April 29, 1945 in Okinawa.

Less than a week later on May 5, 1945 he would be with them as they attempted to take the heights of the Maeda Escarpment from the Japanese defenders there. It would turn into a horrible day for the men of “B” Company. It would also be a day of miracles; the day that Desmond T. Doss, a conscientious objector medic, would earn the Medal of Honor.

Company B was slogging up a steep slope of the Maeda Escarpment from the Japanese. The hill had been honeycombed with caves built for defensive purposes. Suddenly the Japanese launched an all out attack against the Americans. They stormed out of their caves, backed by heavy artillery, mortar and machine gun fire. The attack was so intense, so severe that 75 of the 155 men of “B” Company fell wounded almost immediately. The rest were forced to retreat to the base of the escarpment.

Of the 155 who went up that day, only 55 were able to make it to the bottom of the escarpment. The only soldiers remaining at the top were the Japanese, the wounded and Doss, who refused to leave them. 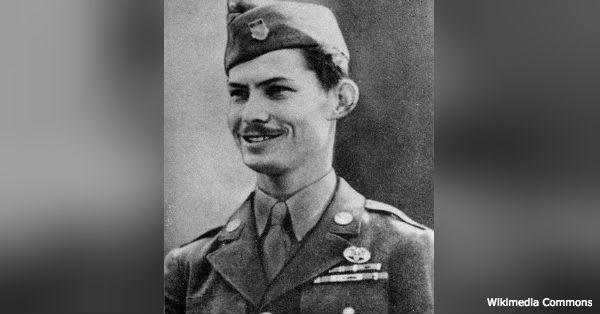 From the bottom of the escarpment, the men of “B” Company could still hear the intensity of the fight above. Then they saw an incredible sight. It was of one of the wounded being lowered by rope over the cliff above them. They could also see that it was Doss who was lowering the man.

Doss had tied one end of the rope around a tree stump and was slowly lowering the man with his bare hands. He repeated this action so many times that they lost count how many he saved over the next 5 hours. In the meantime, the Japanese advanced on the remaining wounded Americans who continued to fight.

At one point, Japanese soldiers came within a few feet of Doss, charging with rifles and bayonets until one of the wounded Americans killed them.

Some said that Doss had saved as many as 100 of his brothers lives that day. Doss himself said it couldn’t have been more than 50. The official Medal of Honor documents would split the difference and set the number Doss’ actions had saved at 75. What Doss did that day was beyond conspicuous valor and heroism. 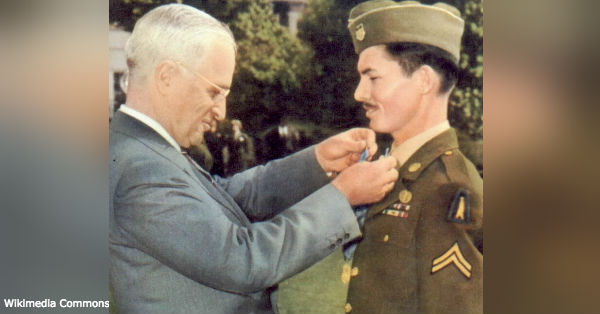 The fight for Okinawa and the escarpment would go on for weeks. It wasn’t over for Doss, either. On the 21st of May, some two weeks after Doss’ brave actions, his company was engaged in another battle. At one point, he and two other soldiers would take refuge from heavy fire in a hole. A Japanese hand grenade was tossed into the hole and two of the men scramble out. Doss, just out of reflexive instinct put his boot over the grenade. When it blew, it threw him up into the air. When he got his wits about him he found that his foot and leg were still there, but riddled with shrapnel.

Stretcher-bearers came along and began to carry Doss him to the rear. But as they went, Doss saw another wounded man. He told the bearers to put him down. He then rolled off of the stretcher and told them to take the other guy. Doss was joined by another wounded soldier and they began to struggle back to the rear together, leaning on each other.

Doss had his arm draped over the other man’s shoulders when a sniper’s bullet struck him in the left wrist. The bullet exited at his elbow and lodged in his upper arm. He used a rifle butt to splint his own arm and the two men then made it back to the rear.

Doss would wake up battered and sore on a hospital ship offshore the next day. When he looked around he could not find the Bible that his mother had given him and that he had carried with him throughout the war. He begged the nurses and doctors to get word to his men that he had lost it. 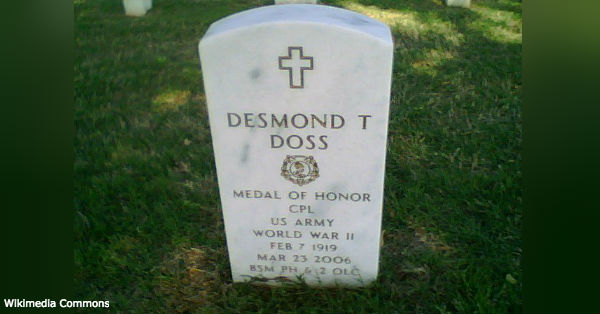 On October 12, 1945, Doss was invited to the White House to receive the Medal of Honor from President Harry S. Truman. When Truman placed the MOH around Doss’ neck, he told him, “I would rather have this medal than be President.”

Desmond T. Doss, a man whose faith would not allow him to kill another human being, had defied the odds. He had shown two kinds of courage during WWII; one was the courage of his religious convictions in the face of ridicule and harassment, the other was that of uncommon, selfless valor carried out in the face of determined and overwhelming enemy fire on the battlefield, all for the sake of his brother soldiers. In these things, Doss had paradoxically honored both his love of God and his love for his fellow man. There was one other miracle waiting for him on his return home too. After the Japanese had been defeated, the men of “B” company, they scoured the battlefield, found Doss’ Bible, and mailed it home to him.

Desmond Doss died at home in Piedmont, Alabama on March 25, 2006 at the age of 87. The Veterans Site wishes to express its thanks and its profound respect to the memory of this extraordinary man, and his family. What Desmond Doss did honored both God and country. R.I.P. You were a good soldier for Christ, and a true healer in his name for your brothers on the field of battle.