This past week I had the privilege and joy of visiting Washington, D.C. with my daughter, son-in-law, and my two granddaughters. We were able to take in most of the important monuments and museums and were all struck deeply again by the depth and vastness of this country’s multifaceted history.

Washington, D.C. is a truly impressive city to visit. Toward the end of our week there, I finally got up the nerve to visit “The Wall,” that is, the Vietnam Memorial.

Next year will be the 50th year since my going to Vietnam. It will also be the 50th anniversary of the 77-day-long siege at Khe Sanh, before and during the Tet Offensive of 1968.

I had gone to The Wall once before, back in 1988, 20 years after being in Vietnam. On that occasion, it took me six days to work up the courage to approach it. When I did, as I approached, my eyes suddenly flooded over with uncontrollable tears that blinded me. My throat tightened and I couldn’t speak. I became overwhelmed by the fact that, while I could remember the faces and the wounds of those I had worked over as one of Bravo Company’s corpsmen, I could not, for some reason, bring their names back into my mind. 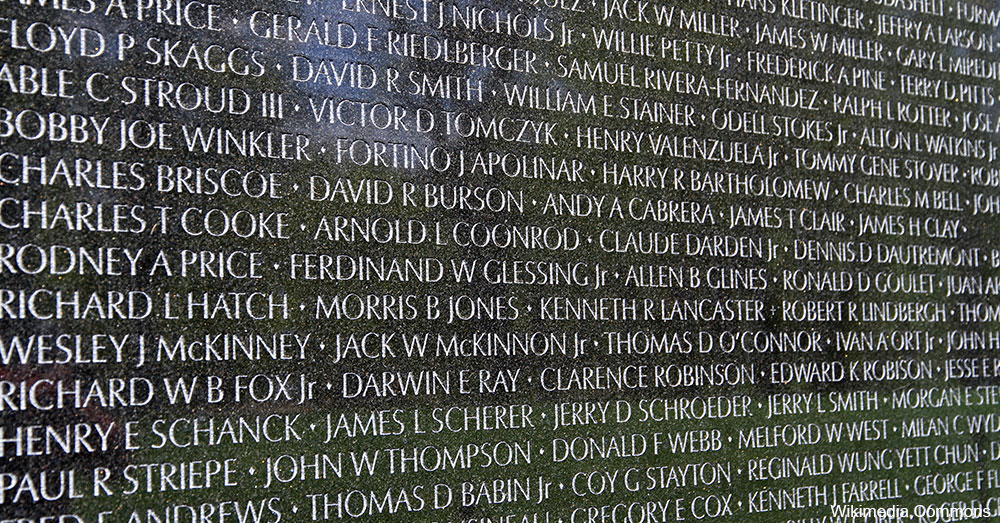 My mind, I now realize, had created its own psychological protection device. I had simply, defensively, forgotten their names. Somehow, forgetting the names of those men I had known and fought with in that far away place, made the memories associated with their loss somewhat distant, and more abstracted, less emotionally turbulent in my mind. Even twenty years after the war I apparently still did not want to deal with the reality of those losses. Forgetting their names had provided my mind and my feelings with a false sense of distance between me and the terrible pain I carried within me, knowing that, though I had tried my hardest as their corpsman, I could not save them.

Standing there before that silent wall so scarred with bitter memories, I was suddenly overwhelmed by surprisingly powerful emotions and I found myself just weeping wordlessly.

That silent wall was like a still open wound. Clean, but not yet healed. 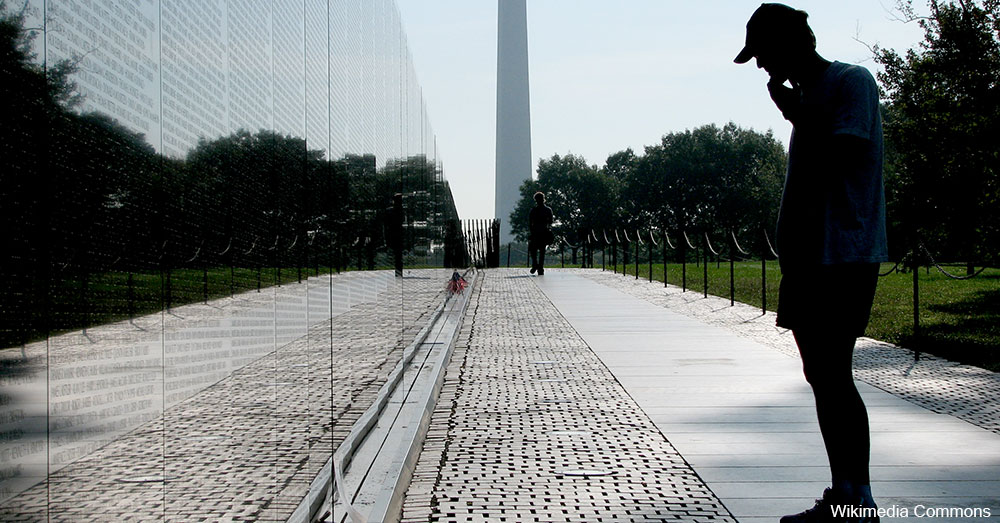 Though there were hundreds of others there visiting the wall as tourists, I felt utterly alone and overwhelmed. As I stood there I became aware of another man approaching me. He came over and stood next to me facing The Wall with me. He was another Vietnam veteran, a volunteer there, assigned to watch out for “his brothers,” other Vietnam veterans who, like me, were coming to The Wall on their own tense, sometimes troubled pilgrimages. He was there to help those who might be having a difficult time with the experience. He quietly asked me if I was OK and I just nodded. He did not say anything else, just stood there at my side, letting me know by his presence that I was not alone, that he had my back in the event that I needed it.

After a while I just looked at him, said thanks and walked away. As I walked away from The Wall that day I bore the weight of those nameless faces inside me.

I carried that weight with me for most of my life. Even as I write this, my throat is tight with emotion, a paradoxical mix of sorrow and joy. My sorrow is for those who fell there at age 18 or 19, who remain forever young and brave in my memory. My joy is for the fact that, by the grace of God, I have lived and have enjoyed the happiness of an over four-decade-long marriage, of watching my children grow into mature, caring individuals, who have become loving teachers, wives, and mothers.

I was blessed with a great, long career in teaching and now I have the privilege of enjoying the freedom of retirement. Those who fell there in the red earth of Khe Sanh under the terrible rain of artillery, rockets, and mortars during that 77-day siege fifty years ago now, never got to know and experience these joys. Those of us who survived only hope that we have honored those who fell by living good and productive lives.

In recent years, I have been reconnected with my Bravo 3rd Recon brothers, especially those of us who endured that long siege at Khe Sanh together. I have come to know them again by attending the 3rd Recon Bn, 3rd Marines, or the Khe Sanh Marines annual reunions. One of the great things that have happened to me as a result of these reunions is that I have not only reconnected with some of the finest men I know, but I have finally been able to again put names back to the memories of those who I cared for but lost those five decades ago.

We Bravo Co. brothers who endured those 77 days together at Khe Sanh, and the weeks leading up to it while out on patrols around the base, had a t-shirt made bearing a painting done from a photograph taken at the memorial service that was held for those who had fallen during the siege. It shows 19 rifles, their bayonets buried in that same red earth, topped by their helmets. The 19 names of the fallen Marines and Navy Corpsmen are printed underneath that image on the back of the t-shirt. Because of this t-shirt, when I went back to The Wall in Washington, D.C. last week, I was able to spend time before it up close and personal, touching it, searching its depths for those names and getting rubbings of each one of them. 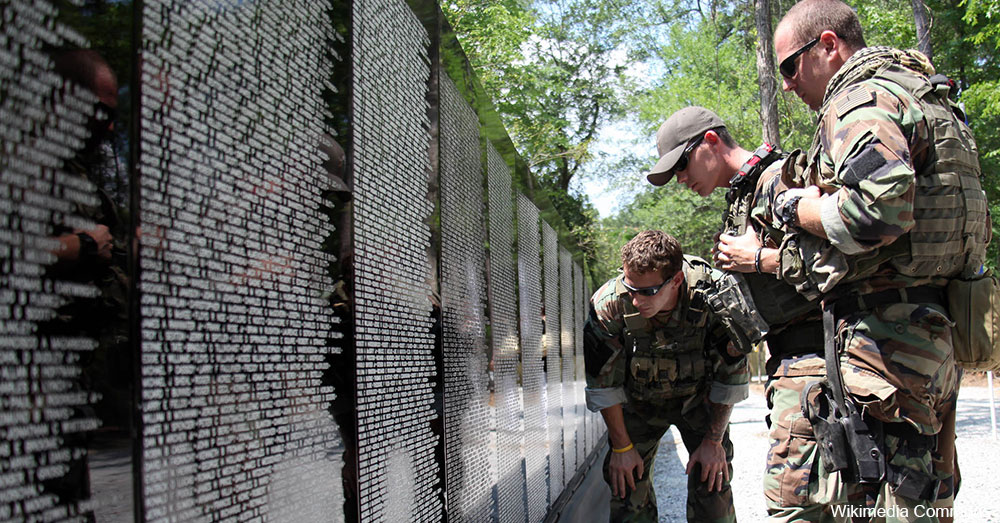 I will be taking those rubbings to my 3rd Recon Bn reunion in Tucson, AR this coming fall. Those who fell there so long ago are with me now in a way that had been beyond me for all those many years. I have their names. They are no longer abstracted memories, or recollections fogged over by some psychological need to protect myself from that deep abyss of loss that I had avoided for so long. I have them with me now. This has not eliminated my deep sense of sorrow. Rather, it has given my sorrow a truer and deeper meaning, one that I no longer fear.

Those who have experienced combat never fully forget it. The intensity of that experience, the depth of sorrow for lost brothers, remains with us and comes up in us at the strangest of times throughout the rest of our lives. The grace of time tends to round off the sharper edges of those memories, even softens them a bit. They become bearable and even become recognized within as a rich part of the foundation of who we are. They give us a knowledge of ourselves and the tested capabilities that we possess and bring to our daily lives. This writer is honored to have served with my fellow Vietnam War veterans, especially my Bravo Co., 3rd Recon Bn., 3rd Marine Division brothers.

The Veterans Site honors and thanks all those who have served and sacrificed on behalf of freedom and the nation. We promise to remain faithful to the memory of those who fell.