They called it “Operation Overlord.”

We know it as D-Day. June 6, 1944 is one of those rare days in human history that can be remembered for having changed the course of history. But that is what that day did, for it was on that day that the winds of war turned against the Nazi war machine, and the tide turned toward freedom. 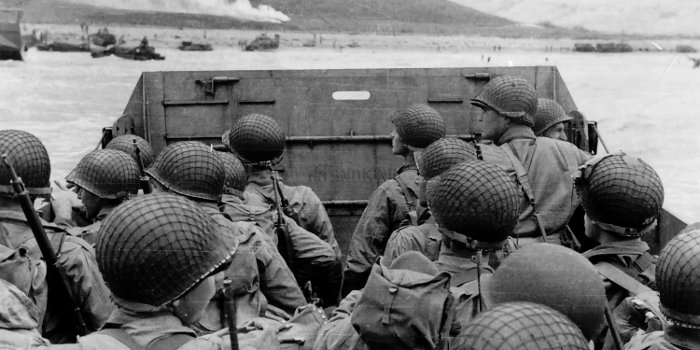 There has been nothing like it in history before or since. Just in terms of the size and scope of the logistics that were involved, to plan, to move men and material in such a monumental and largely coordinated manner, is almost unimaginable. The planners brought together a force made up of thousands of airplanes and gliders, tens of thousands of ships, hundreds of thousands of men from Great Britain, Canada and the United States of America. And if that wasn’t enough, there was also the problem of the weather. Still, with all the planning, all of the intelligence and the efforts at deception, the success of that day came down to the courage, wit, creativity, and determination of small units finding small holes in the wall of rifle, machine gun, and mortar fire from the German defenses to take those positions one by one.

Five beachheads had to be stormed and taken that day: Gold, Juno, Sword, Utah and Omaha. If one had failed, the whole effort might have failed as well. But all five of those wide beaches, or the high cliffs immediately behind, them were won by the Allied forces sent against them that day. Of them all, Omaha was the most terrible and bloodiest contest.

★ Did You Know: The Price of Freedom ★

The landings began at 06:30 a.m. that day. By the end of the day, Allied forces casualty figures were estimated at well over 10,000, including 4414 dead. The casualties, broken down by nationality, were estimated at approximately 2700 British, 946 Canadians, and 6603 Americans. Casualty numbers include KIA, WIA, missing and captured personnel. Over the course of the total Normandy operation, Allied casualties would total over 200,000 — including 37,000 dead among the ground forces and another 16,714 amongst the Allied air forces.

There are fewer and fewer of those veterans who went ashore on that day and the days following the original landings that are still with us. We must never forget the price that was paid at Normandy by so many young men from America, Canada and Great Britain, along with French and Polish troops. They were participants in an epic struggle for freedom. They went ashore, fought their fears and the enemy with pure grit and determination. In the middle of that hell that day, they did not fight so much for the grand idea of liberty; they fought for those next to them, just as all soldiers have in every war. But those efforts they undertook that day were the beginning of the end for the Third Reich and its horrible atrocities against humanity. So many of them paid the full price that day and in the days following.

The waters of the English Channel and the sands along its shores were reddened with the blood of so many good, young men, dead and wounded. Those who died that day were from the ranks of the common man. They came from big cities and small towns, and from the farms of the nation. They fought as brothers in arms against a mighty and vicious enemy. Those who fell that day are remembered by those who came home from that war as if it was yesterday. They rest now in the honored, well-kept and manicured, sacred grounds of the Allied cemeteries that occupy the bluffs above those beaches they came ashore on that terrible day.

The Greatest Generation: A Lasting Legacy

Those who survived, came home to participate in the largest expansion of the middle class in human history. They began the technological age that is so much a part of our daily lives today, including the space program, cell phones, and the computer. They were entrepreneurial in spirit, confident in their abilities to overcome challenges. They were not afraid of hard work. They understood their duties to each other, to their families and to their nation. They undertook everything they did with the same kind of courage and determination that made them successful in those days of the Normandy Invasion. They earned the moniker: The Greatest Generation.

The numbers of those who came home are few now and they are leaving us swiftly. They are all in their late 80s and 90s now. We are challenged even more now to remember what they did and what their efforts meant for the nation and the world. We must never forget the character of their generation, the quality of their valor, the unimaginable cost of their sacrifices. We owe them our remembering and our thanks. They made us who we are as a nation.

Images
1) Normandy Invasion, June 1944: Troops in an LCVP landing craft approaching “Omaha” Beach on “D-Day”, 6 June 1944. Note helmet netting; faint “No Smoking” sign on the LCVP’s ramp; and M1903 rifles and M1 carbines carried by some of these men. (Image courtesy the National Archives).
2) ST. AVOLD, France – Leslie Palmer Cruise Jr., an 89-year-old World War II veteran from Horsham, Pa., salutes the gravesite of Pfc. Richard Vargas during a wreath laying ceremony here at Lorraine American Cemetery June 2. Both Cruise and Vargas served as paratroopers with H Co., 505th Parachute Infantry Regiment, 82nd Airborne, and were part of the airborne assault during the D-Day invasion June 6, 1944. The next day, while members of the 82nd Airborne tried to secure a roadblock, Vargas was fatally struck by a mortar shell. Cruise was inches from him when the shell exploded but was unharmed. He moved Vargas to cover and provided care to his fallen comrade until the field medic arrived. Later that day, Cruise learned that Vargas had died en route to the aid station. Organized by the National Warplane Museum, the wreath laying ceremony was part of this week’s 70th anniversary of the D-Day invasion. (U.S. Army photo by Brandon Beach, CC BY 2.0).