When a person chooses to pay it forward, despite challenges and tragedies faced personally, the impact is often overwhelming to others. That’s how yoga students of 42-year old Retired Army Sgt. Dan Nevins usually feel when they are instructed how to push themselves to improve their overall well-being.

Dan Nevins / Via Helayne Seidman and The New York Post

Nevins is not your typical yoga instructor. He is a heroic Iraq war veteran who travels across the country to teach yoga, despite the fact that he lost both of his legs due to an improvised explosive device, or IED, detonating beneath his patrol vehicle during the Battle of Fallujah, according to the New York Post. Nevins lost one leg instantly. The other one could not be saved, even after 30 surgeries. But Nevins persisted.

The double amputee now uses his disability to inspire the crowds who show up to his yoga sessions in cities throughout the United States. The participants are often awe-inspired when watching Nevins lead them through the poses while wearing metal prosthetics. 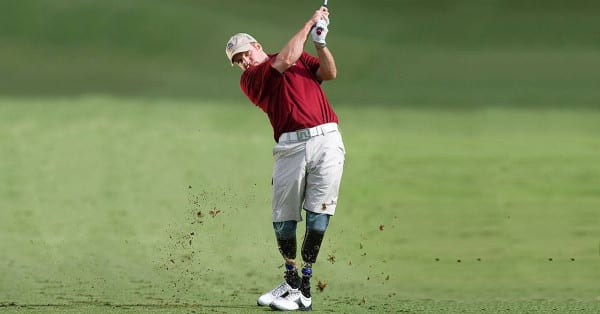 Dan Nevins / Via Tee Off Fore A Cause

Prior to losing his legs, Nevins was an active athlete and thrived on physical adventures, such as running and rock climbing. He now says that even though he was hesitant at first, he is eager to jump back into activities that are physical, despite his disability. “You can’t let the disability stop you,” Nevins said during an interview with Parade.

Teaching yoga nationwide, Nevins is determined not to let his disability stop him. He actively snowboards, golfs, engages in white water rafting and has even climbed Mt. Kilimanjaro, which was something he said he did not think was possible when he lost his legs.

Many veterans are able to fulfill their dreams and make an impact on others with the help of organizations such as Wounded Warrior Project and the Veterans Site. You, too, can make a difference by furthering the efforts of these veterans with your time and donations.