World War II saw many new and terrifying ways for nations to fight each other. The Axis Powers and Allied forces attempted to end the war through a combination of tank divisions, long-range bombers, aircraft carriers, submarines, jet aircraft and even primitive missiles. As such, military divisions that met on land, sea and air faced battles the likes of which the world had never seen before or since. When we commemorate the memories of the veterans of the Greatest Generation, discover the top 10 battle stories of World War II. 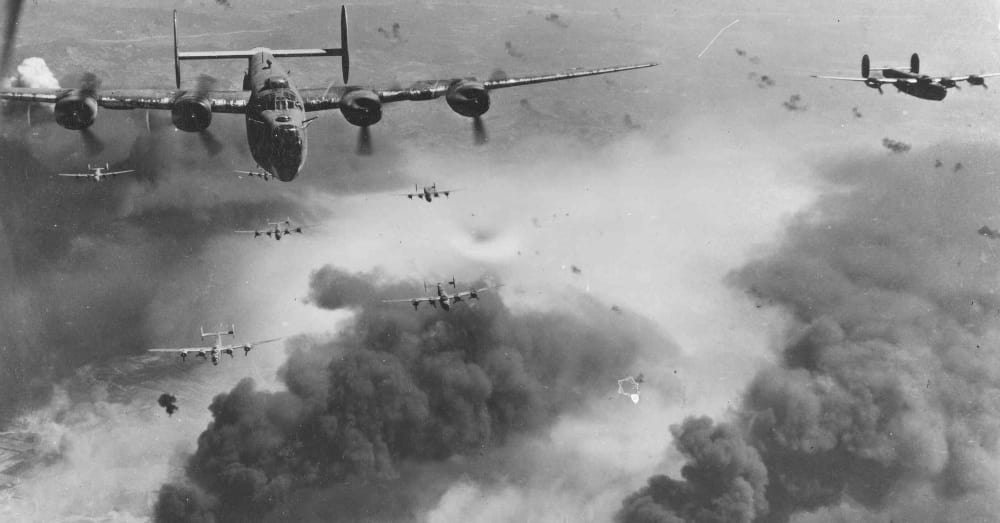 On Aug. 1, 1943, Allied bombers took off from bases in northern Libya and southern Italy to bomb the oil refineries of Polesti, Romania as part of Operation Tidal Wave. The refinery complex and the surrounding oil fields supplied 60 percent of the fuel for the German military. A total of 178 B-24D bombers took off on a 2,000-mile journey into hell. Germans broke the radio code used by American and British flyers and the enemy monitored the departure. When the planes arrived near Polesti, the lead bomber took a wrong turn and became detected by German installations. Capt. Phillip Ardery, the squadron leader for the daring attack, wrote in his journal that the German anti-aircraft guns felt like a “curtain of steel.” Ardery’s job was to take out the huge boiler of the main plant at Polesti. The bombers came in low, and Ardery lamented the captain of another plane, named Pete, whose aircraft went down in a ball of flames before it could land. A total of 53 bombers. loaded with 10-man crews, never made it home. Despite destroying 42 percent of Polesti’s fuel-producing capacity, the Germans had the facility running at peak efficiency a few days later. 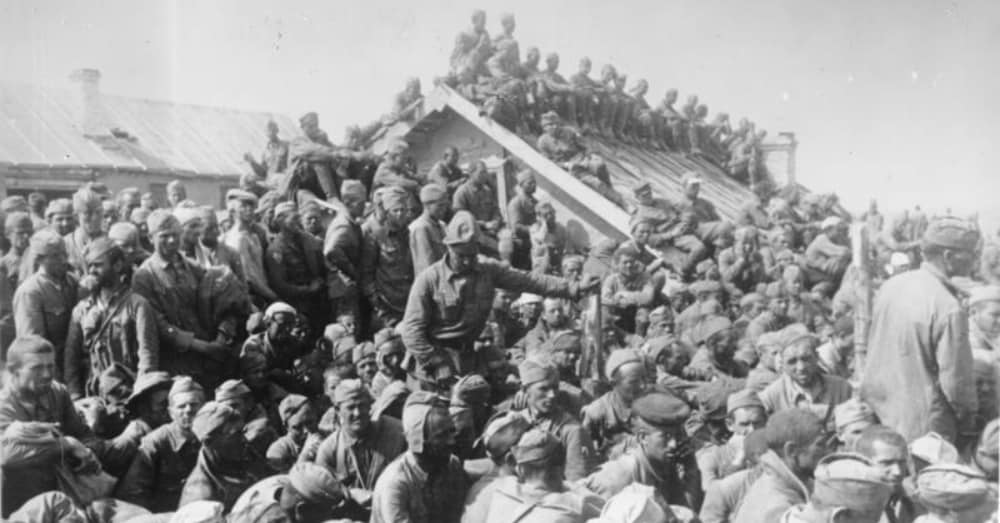 The First Battle of Smolensk, codenamed Operation Barbarossa by the Germans, was a major offensive in the summer and early fall of 1941 as part of an overall effort to subdue the Soviet Union. The Russians committed huge numbers of troops to this front as a defense against the Germans who saw Moscow as the ultimate prize. Despite heavy losses and a German victory, Soviet troops slowed the Third Reich’s march to Moscow. The First Battle of Smolensk allowed Soviet troops to shore up defenses in the capital city in time to win the Battle of Moscow three months later. As many as 250,000 German soldiers died during this campaign, but several eastern Russian cities lay in ruins. The troops pictured are Soviet POWs being held prisoner by German captives. 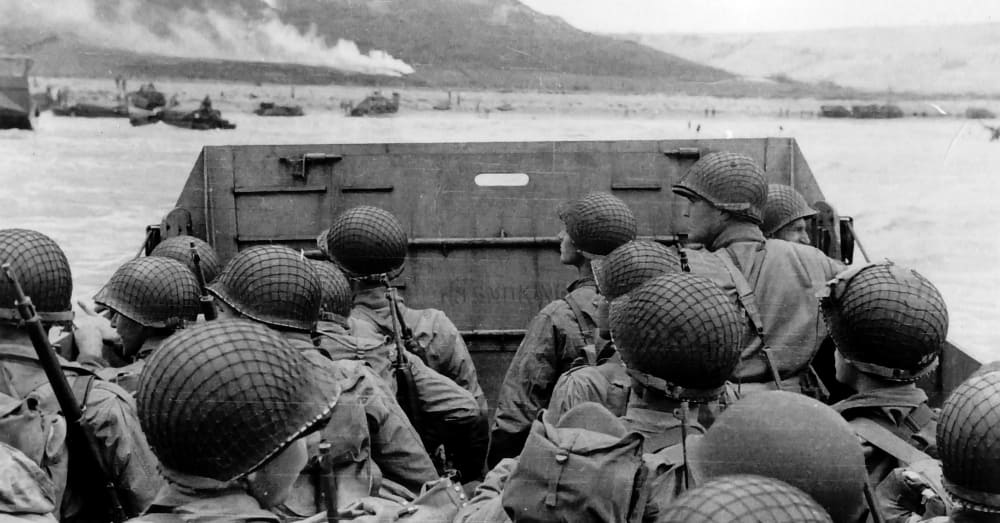 The D-Day landing at Normandy on June 6, 1944, was the largest military operation the world had ever seen at the time of its implementation. Under the command of American Gen. Dwight D. Eisenhower, more than 160,000 Allied troops landed on the 50-mile stretch of beach along the northern French coast. More than 9,000 Allied troops were killed in the advance, but the Allies finally got a foothold in continental Europe that they would never relinquish. Eisenhower said before the invasion that “we will accept nothing less than full victory.” Nearly one year later, Hitler and Germany fell in Berlin. The sacrifice of those on Omaha Beach, pictured above, should never be forgotten. 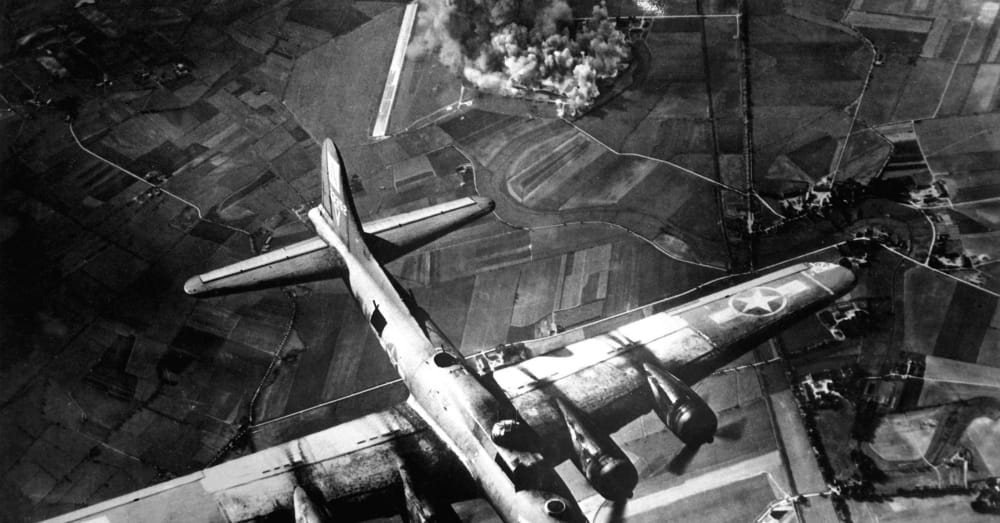 On Oct. 9, 1943, a massive squadron of 100 B-17 bombers took off from bases in England and flew all the way to Marienburg, more than 1,000 nautical miles away in eastern Germany. There, the Germans relocated a key aircraft component factory that was once in Bremen. The Germans made a mistake in thinking this site was out of range of Allied bombers. The Allies launched three simultaneous attacks to draw the Luftwaffe away from Marienburg before the phalanx of B-17s flew to their target. The operation was so overwhelmingly successful, thanks in part to clear weather and little German resistance, Brig. Gen. Robert Travis remarked, “It is the best bombing we have had. Our bombs hit right on the target perfectly. We watched them go down and if there is any target left, I donâ€™t believe it. I never saw so many fighters in my life. It was a very active day.” 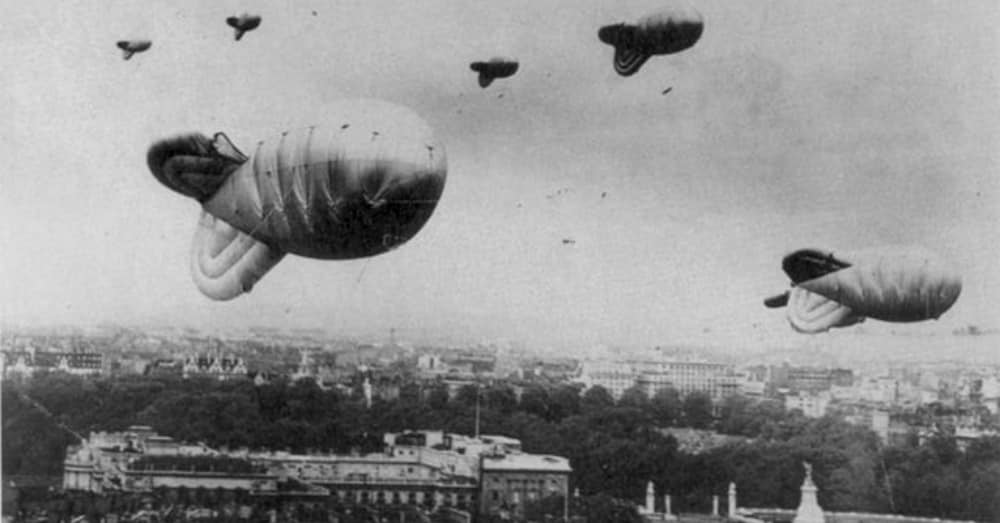 The London Blitz was a series of bombing raids carried out by the German Luftwaffe beginning on Sept. 7, 1940, and lasting for 57 consecutive days. Barrage balloons, like those pictured, helped keep aircraft from flying lower and inflicting even heavier losses. Famous war correspondent Ernie Pyle wrote of one raid, “They came just after dark, and somehow you could sense from the quick, bitter firing of the guns that there was to be no monkey business this night. Shortly after the sirens wailed you could hear the Germans grinding overhead. In my room, with its black curtains drawn across the windows, you could feel the shake from the guns. You could hear the boom, crump, crump, crump, of heavy bombs at their work of tearing buildings apart. They were not too far away.” 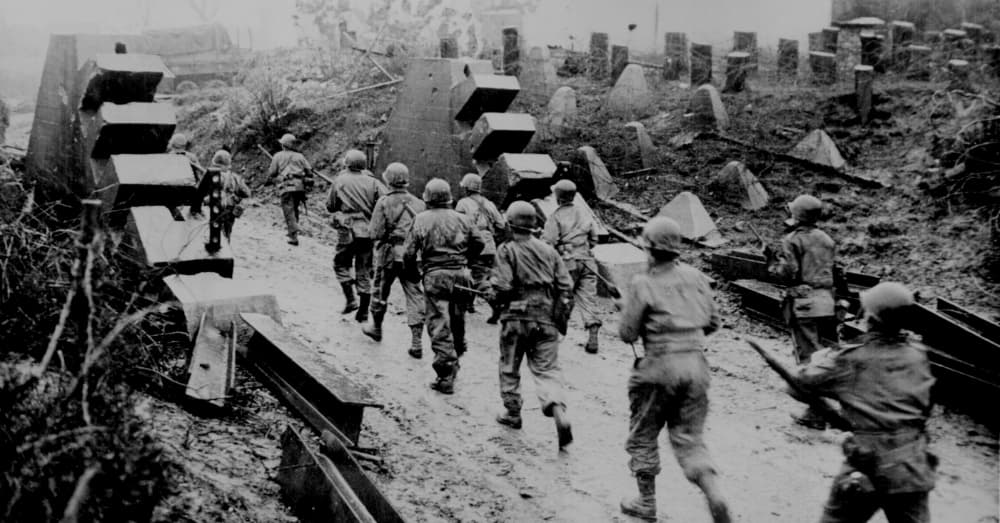 The Siegfried Line was a vast line of 18,000 fortifications along the border of Germany and France. Among the placements here were bunkers with walls 11 feet thick, tank traps and minefields. After the Allies took France, they had to get through this line to proceed with the offensive into Germany. Before ordinary troops could advance, special teams of engineers had to go in an disarm any traps in the area. This photo shows Army troops on a fast march through some of the fortifications. 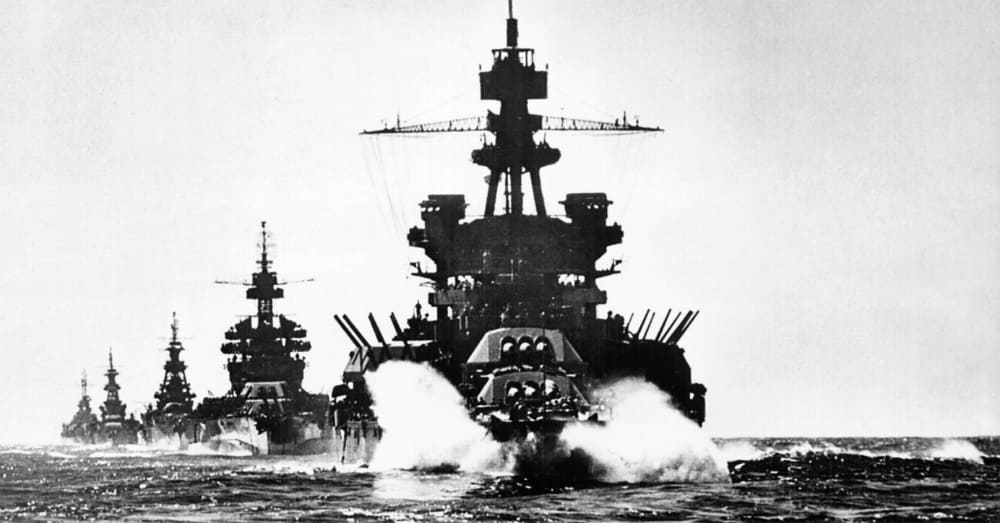 The invasion of Lingayen Gulf occurred in early January 1945 as part of a plan to liberate the island nation from Japanese occupation. Ships, such as the battleship U.S.S. Pennsylvania pictured above, advanced from Leyte, an island taken by Allied naval ships three months earlier. The U.S. Army landed at Luzon, the same place where Japanese troops began their invasion in 1941. The intense fighting saw the Japanese commanders order several suicide missions to try to destroy Allied advances. These tactics were minimally successful. 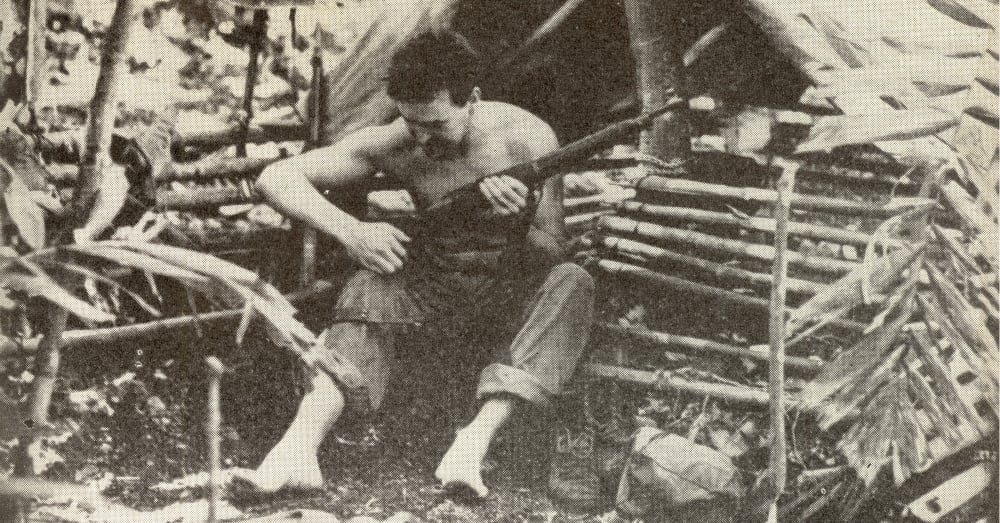 The Battle of Guadalcanal featured the first major victory by the Allies in the Pacific. U.S. Marines launched a surprise attack against Japanese positions in the Solomon Islands in August 1942. The Marines took an airport on their first attack, and they advanced through a series of land and sea battles until the Japanese withdrew completely in February 1943. Without Guadalcanal, Japan’s naval and air bases would pose no threats to Hawaii or the west coast of the United States. For casualties, the Japanese lost two-thirds of the 31,000 men stationed in Guadalcanal, while American losses were just 2,000 out of the 60,000 troops deployed. 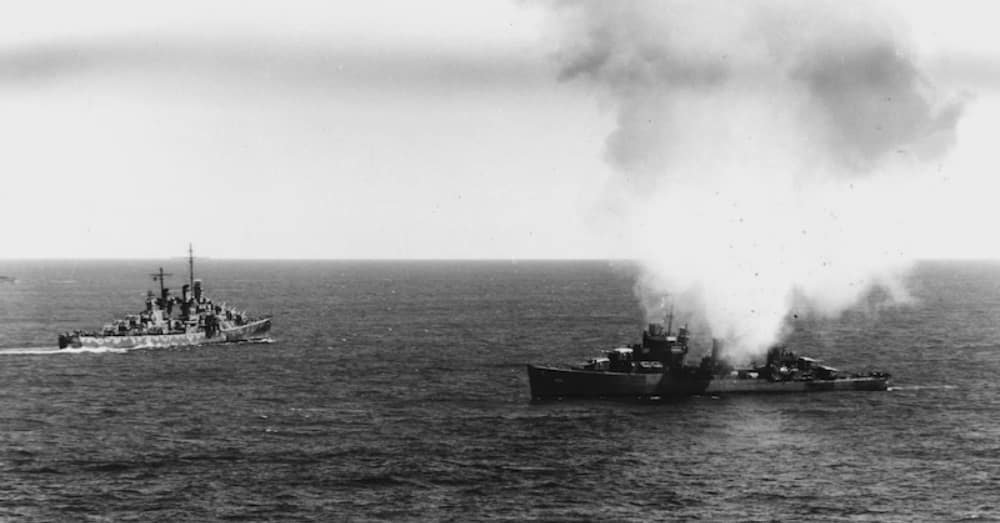 The Battle of Midway happened in early June 1942 as a daring Japanese plan to take a remote U.S. Navy base unfolded. Adm. Chester Nimitz, commanding the Pacific Fleet, ordered the fleet ready to repel the incoming Japanese invaders. The enemy lost four aircraft carriers during the battle, while the Americans lost the U.S.S. Yorktown. However, the Japanese never wandered that far from their shores for the rest of the war. The resounding American victory kept the Japanese from advancing towards Hawaii. The picture shows the U.S.S. Phelps in action during the battle. 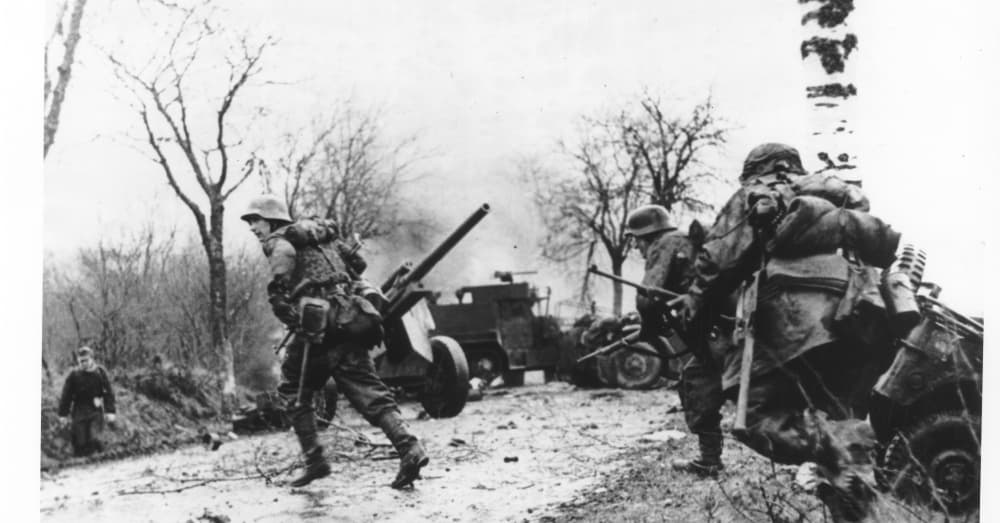 The Battle of the Bulge served as a last-ditch effort by the Germans to keep Allied forces from entering Germany. Nearly 200,000 Germans and 1,000 tanks launched an offensive in an attempt to push the Americans back towards the coast of France in December 1944. The Americans’ line bulged, but never broke, in the Ardenne Forest. Eisenhower quickly sent reinforcements, including Lt. Gen. George S. Patton, to try to keep the Germans at bay. Despite the enormous attack, soldiers kept the Germans occupied at all costs until reinforcements arrived. After Patton’s Third Army came onto the scene, the American line stabilized and returned its original position near the Germany border in January 1945. Of the battle, Sir Winston Churchill said, “This is undoubtedly the greatest American battle of the war and will, I believe, be regarded as an ever-famous American victory.” Because of American fortitude to bend and not break, the Battle of the Bulge is regarded by many as the greatest military battle in American history. The photo shows German troops in the heat of the battle.

So many people gave their lives in the fight against tyranny during World War II. Several battles defined the mettle of American troops, including the D-Day invasion and subsequent offensives to the intense island-hopping campaigns in the Pacific Theater. Everyone owes the men and women of the Greatest Generation a debt of gratitude for their sacrifices so we can enjoy the freedom we have today.