There is bravery in the face of long odds, and then there is retired Sgt. John Peck of the United States Marine Corps. Two tours of duty in Iraq and Afghanistan ended with Peck losing all four of his limbs after he stepped on an IED mine in 2010. That didn’t keep the young man down, and he has a bright outlook on his future even as he adapts to a new life. 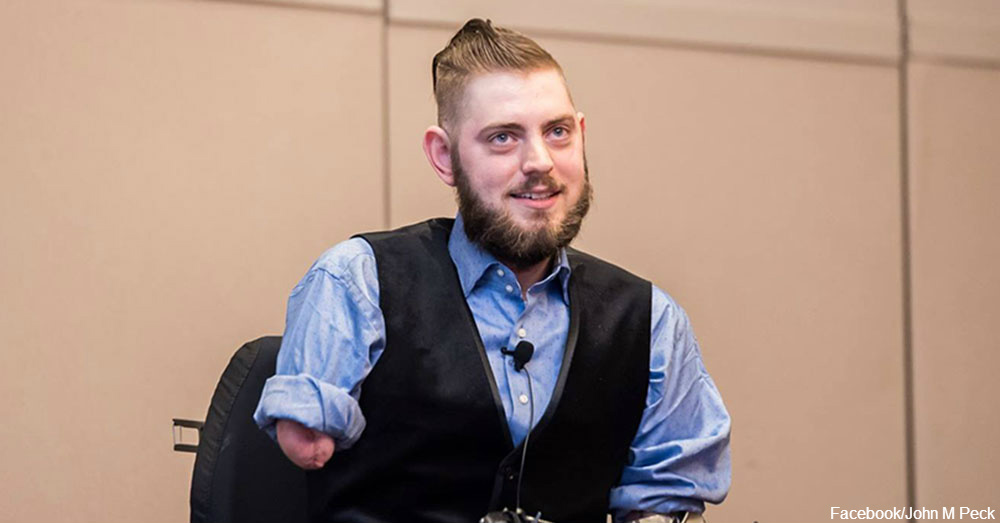 The Blast That Took His Limbs

Peck was manning a vehicle-mounted machine gun in Al-Anbar province in Iraq in 2007 when his head smashed into the machine gun after the vehicle hit an IED. That was just his first wound from his first tour. Despite amnesia and possible PTSD, Peck begged to back to full duty. His simple reason? As a Marine, he felt it was his obligation to protect his unit.

Instead of getting a medical release, Peck took the lead in his unit sweeping for explosives in Helmand Province, Afghanistan, because the rest of the guys had no combat experience. After sweeping one compound with a metal detector on May 24, 2010, the sergeant stepped on an IED. He remembers something hitting him very hard in the head and then nothing else until waking up in Walter Reed Medical Center two months later as a quadruple amputee. 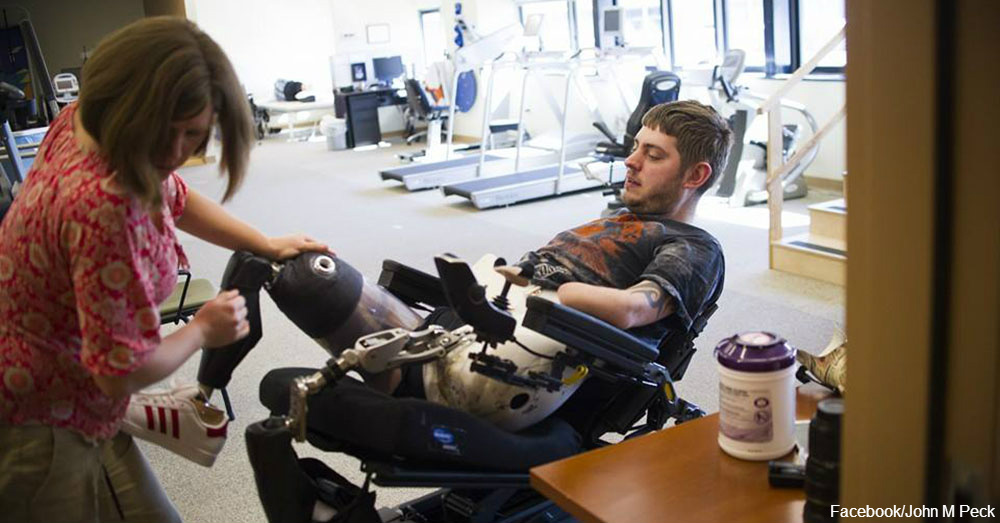 The Recovery That Nearly Took His Life

Doctors placed Peck in a medically induced coma during much of those two months. His body endured 27 surgeries, 41 blood transfusions and three flat lines. Doctors pronounced him dead once. Surgeons had to remove one arm because of an aggressive fungal infection that nearly cost Peck his life again. This Marine simply has the determination to life against all odds.

Peck became one of five surviving quadruple amputees from Iraq and Afghanistan. He is also only one of two people to survive the flesh-eating fungus that contaminated his blood. When Peck awoke in August, his family had to explain what happened, and the Marine couldn’t speak because of the breathing tube in his throat. His skin became extremely sensitive to touch. He faced years of rehabilitation and the need for a full-time caregiver. 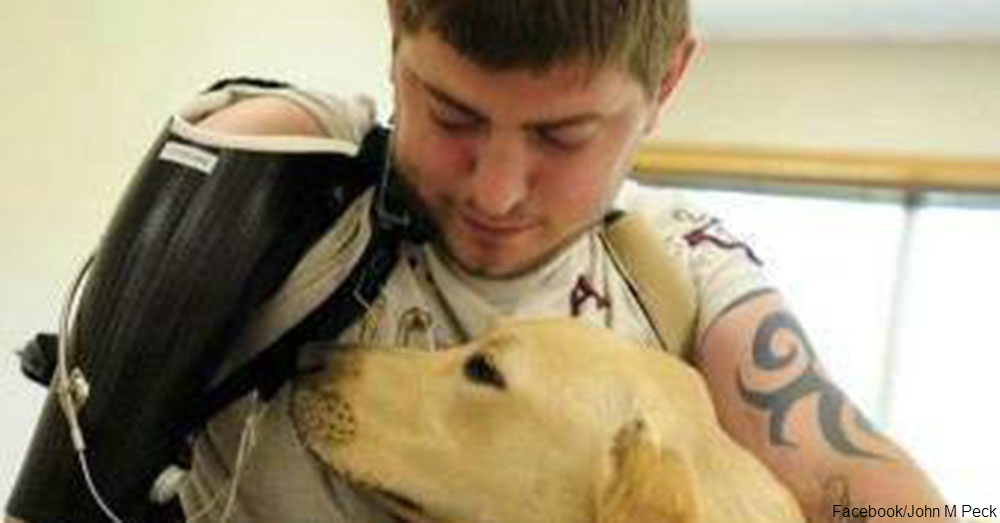 The Outlook That Keeps Him Going

What is Peck’s motto as he endured all of these life-altering situations? “I’ve had worse odds.”

Throughout all of it, Peck credits his mother, Lisa, for his fierce determination. She was a single mother who raised her son through lean times at Christmas. Peck remembers his mom struggling to raise him alone when she would say the two of them could get through anything as long as they stuck together. Lisa is now her son’s primary caregiver during the day at his home in Richmond, Virginia.

Peck’s mother also says anything is possible if you look for answers rather than dwelling on a problem. The retired Marine certainly takes that advice to heart. Shortly after leaving the hospital, Peck heard of European doctors who performed hand transplants but initially passed on that idea because he didn’t feel comfortable with the team of doctors. In 2013, he heard of a Spanish medical team that could transplant two legs from a cadaver to a living person. After nearly two years of dogged determination, Peck met with doctors in Boston at Brigham and Women’s Hospital to see about getting a new set of wheels.

Because Peck’s left leg is completely gone, he is not a candidate for a leg transplant. Instead, he walks with prosthetics and uses an all-terrain wheelchair with tank-like treads to get around his smart house that helps him with daily tasks. However, the doctors gave Peck hope for getting two arms. Peck says a team of 12 to 16 doctors can perform a 16-hour surgery to attach metal plates, nerves, blood vessels, muscles and tendons to two cadaver arms. All Peck needs is a compatible match.

An Army soldier, Brendan Marrocco, went through the same arm transplant surgery in 2012 at Johns Hopkins. Two years after the surgery, Marrocco was performing pull-ups. If Peck’s surgery is successful, he plans to attend culinary school and then audition to be a star on Food Network — after the two years it will take him to relearn how to use full arms and hands. 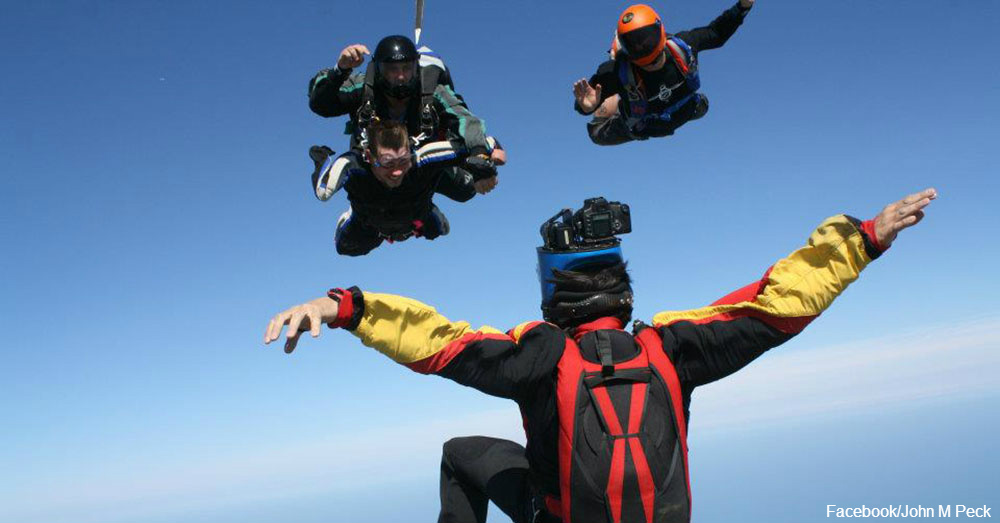 If his current recovery is any indication, the Marine should accomplish that dream by sheer willpower alone. He’s already parachuted out of an airplane, scuba dived, gotten married and become a motivational speaker. Soon, he might add gourmet cooking to that list. Perhaps one day, he can look back and say he has fulfilled every one of his dreams.

Peck’s story is one of true heroism in the face of nearly impossible odds. His attitude gives hope to everyone who faces life-changing injuries. See how robotic legs give new hope to veterans who can’t walk on their own.