There is a saying known among Navy Corpsmen and their Marine brothers that goes this way: “A Navy Corpsman will go to hell and back for his wounded Marines.”

Yes, it is a relationship of necessity, but because of the nature of their work together, there is a level of trust, respect and mutual concern for each other that has no comparison anywhere else. This story about Hospital Corpsman 3rd class, Luis Fonseca, is a great example of the power of this Marine/Fleet Marine Force (FMF) Corpsman relationship. 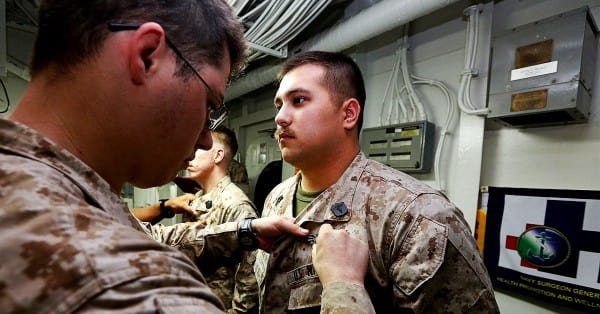 A Navy Corpsman is awarded his FMF pin / Via Cpl. Caleb McDonald

Like all Navy Corpsmen, Luis Fonseca was trained and educated in a different military culture at first. He was trained in Navy Hospital Corps School primarily for medical duties aboard ships and at Naval Hospital facilities. This is where most Corpsmen serve during their time in the Navy, but a certain percentage of Corpsmen receive orders to Fleet Marine Force assignments with the Marine Corps. With these orders they enter into an entirely new culture and medical training; they become “Marines” and enter into the Marine Corps ethic and brotherhood.

They are now responsible for the lives and the health of “their” Marines in peace and in war.

The real test for all of them, Marines and Corpsmen alike, comes when they must respond under the stress and chaos of battle. HM3 Luis Fonseca showed the skill and the dedication that FMF Corpsmen have for their Marines while serving with them in Iraq.

In March of 2003, Luis Fonseca was assigned to the 2nd Assault Amphibian Battalion. It was his first deployment and he was really a newly minted Corpsman. According to Task and Purpose, in the early days of the Iraq War, Fonseca’s unit was ordered to take and to hold the northernmost of three bridges: Saddam Canal Bridge in the town of Nasirayah. It was here that Corpsman Luis Fonseca and his Marine Corps brothers would experience the realities of war that, up till then, they had only trained for. This was the real thing.

They were confronted by trained Iraqi army veterans, not ragtag insurgents. The Marines of Fonseca’s unit came under an intense and well-disciplined ambush. According to Task and Purpose, the unit came under an extremely coordinated attack and were being hit with everything: small arms fire, heavy machine guns, mortars, rocket propelled grenades, and artillery. It was not long before the call “Corpsman Up!” was heard. 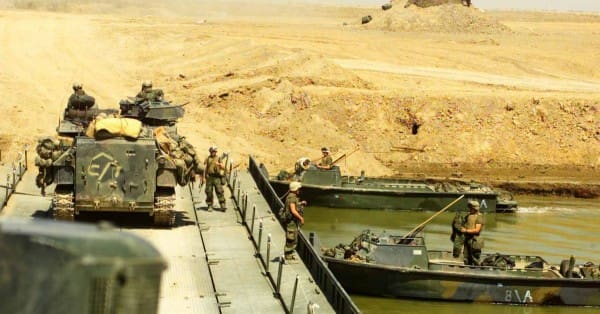 According to the U.S. Navy, while the unit’s Company C was attempting to take the Saddam Canal Bridge, a rocket propelled grenade struck one of their amphibious assault vehicles. Five Marines were wounded. The Navy website described what Fonseca did that day this way:

“Fonseca braved live fire to evacuate the wounded Marines from the burning amphibious assault vehicle and tend to their wounds. He also established a casualty collection point, directed the movement of casualties while personally carrying one himself, and then exposed himself to enemy fire again to treat wounded Marines along the perimeter.”

For his actions that day, he was awarded the Navy Cross.

Fonseca said of his experience, “It’s like asking what I need to do to train you to die… You can’t train someone to experience that, to react to that pressure.” An FMF Corpsman to the core, it seems that Fonseca feels that he did what any other corpsman would do in similar circumstances. He recognizes that he was trained well in terms of dealing with the medical issues, but also that no one can be prepared for the stress and chaos of real time war.

Luis Fonseca’s story is the story of all FMF Corpsmen who have gone to war with their Marine brothers. Yes, it is true that a corpsman will go to hell and back for his Marines, but it is also true that his Marines will do the same for him. I know this relationship personally. 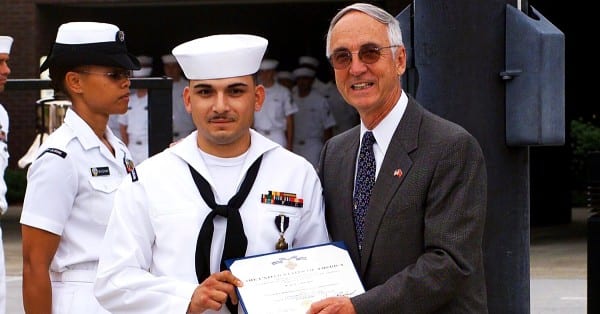 Last month I attended my annual reunion with my 3rd Recon Bn, 3rd Marine Division brothers. The brotherhood that began for us in Bravo Co., in the hell of Khe Sanh, and the jungled mountains of Vietnam 47 years ago, is still rich and powerful between us today. Those who have been in combat together share a mutual respect and affection for one another. This remains a source of real care and support between us to this day. Marines welcome their corpsmen as fellow Marines and it is true: “Once a Marine, always a Marine.” HM3 Luis Fonseca belongs to that privileged brotherhood, too.

salutes Luis Fonseca for his courage in the face of the enemy, for his skill and dedication to his fellow Marines. We honor him for the heroic actions he undertook for his Marines on March 23, 2003. Because of his decisions and actions under fire, several Marines’ lives were saved. That is the true purpose of an FMF Corpsman’s existence.

It is a privilege for a Navy Corpsman to serve alongside his/her Marines, but to be able to save their lives is the greatest honor a Corpsman can know. We say, “Oorah!” to all who have served as FMF Corpsmen.