“I just thought I’d come over and try and let a couple of kids say bye to their dad…it’s definitely a memorable moment.”

That is what Police Officer James Weaver did to help two children have one last goodbye with their father before he shipped out on his first deployment.

Josh Buetow, a sailor on the USS Carl Vinson, was shipping away on deployment in early 2017.

His wife, Brettany Buetow, and their two kids, four-year-old Rileigh and two-year-old Austin, were shouting goodbye across the water.

San Diego Police Officer James Weaver happened to be there at the same time and saw the kids shouting their goodbyes.

“I figured that he couldn’t hear them cause I could barely hear them from across the parking lot, so I just pulled my car over and asked if they wanted to use the PA.”

Brettany captured the kindness of Officer Weaver on her phone then posted the photos on Facebook. 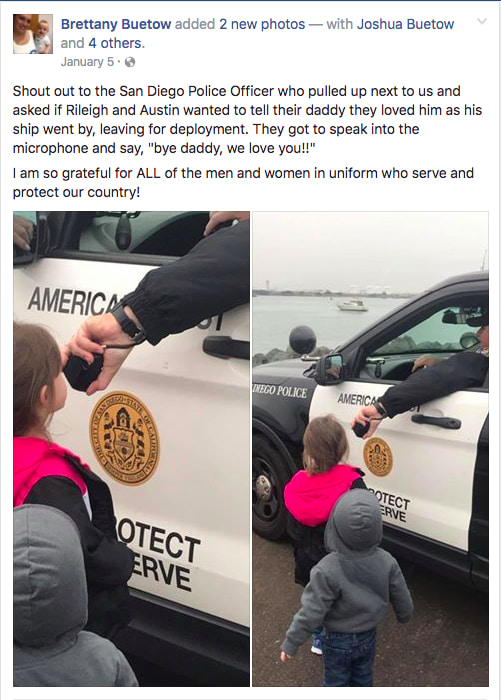 Thank You Officer James Weaver for being an excellent example of the kindness and companionship of our local heroes who wear the blue!

Avi Forstein is a loud and funny person who enjoys listening to podcasts, the Green Bay Packers, Batman and playing party board games. His dream job is to be a game show host or a Power Ranger. He reminds everyone to "Watch Out For Snakes".
Proper greatergood_ctg_belowcontent