Confederate flags will be banned from flagpoles in Veterans Administration cemeteries if a bill recently supported by the House becomes a law.

The 265-159 vote took place in the early hours of May 19 and included the support of 84 Republicans and all but two Democrats. The bill’s author, California Representitive Jared Huffman, said the flag represents “racism, slavery, and division.”

“Over 150 years ago, slavery was abolished. Why in the year 2016 are we still condoning displays of this hateful symbol on our sacred national cemeteries?” Huffman asked before a silent House.

A similar amendment to the Constitution was proposed by the House last year as an attachment to an appropriations bill. It would have blocked the display and sale of the Confederate flag at national parks, but never made it to a vote.

Southern Republicans make up one of the larger groups that oppose the bill, but even Republican Speaker Paul Ryan has supported it, if only for the sake of expediency. 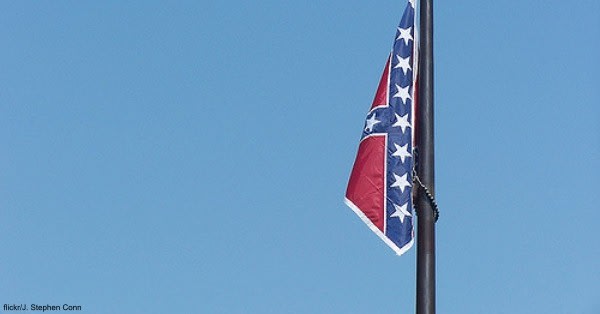 One month before voting on this year’s confederate flag ban, the House Administration Committee compromised on removing the Confederate image from an underground subway that connects the Rayburn House Office Building to the Capitol. The subway will show pictures of commemorative state coins instead of each state flag. The state of Mississippi is currently the only state with the Confederate logo on its flag. That flag has also come under scrutiny from several procedural votes in past years, but no action has been taken.

Flags contain strong cultural symbolism and have been used for ages a method to communicate loyalty, pride, and support. The idea of military service flags began during World War I, when the families of those fighting overseas displayed flags in the windows of their homes. Read more about these flags in this story about a Harvard Veteran with a love of history.