Naval warfare was changed forever one cold winter night during the Civil War. The Union had a blockade at Charleston Harbor, South Carolina, with the USS Housatonic and other ships guarding the area. The Confederates were desperate to break through the blockade, and they used the most advanced weapon they had in their arsenal — a newly designed submarine named the H.L. Hunley.

The Hunley was a 40-foot-long submersible iron vessel with a crew of eight men. Seven of the men squeezed their way into the narrow cylinder and used a hand crank to propel while the captain in the front steered with a rudder. Two ballast tanks could be filled with water to submerge the submarine. A “torpedo” was the submarine’s only weapon — a detachable barbed spear with 135 pounds of black powder attached.

On the night of Feb. 17, 1864, the H.L. Hunley and its crew of eight set out against the USS Housatonic. The torpedo was attached to the ship’s hull and detonated, sinking the 1,240 ton Union sloop-of-war. That made the Hunley the first submarine in history to sink a battleship. However, it was a short-lived victory as the Hunley never made it back to shore. It sank that night, taking the entire crew with it. What caused the submarine to sink, the fate of the Confederates inside, and the exact workings of the vessel have remained a mystery, until now. 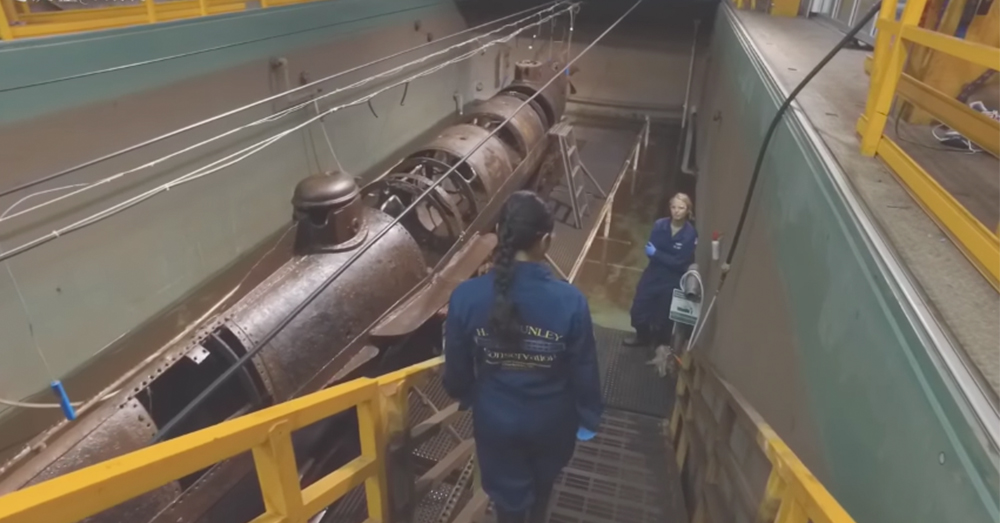 The submarine was discovered in 1995 and then subsequently retrieved from the water in 2000. The remains of all eight crewmen were found inside the vessel, still at their posts. They were exhumed and buried. Since then, it has been at the Warren Lasch Conservation Center in Charleston, undergoing painstaking restoration.

The submarine is kept in a 75,000-gallon tank. The water and a 1 percent solution of sodium hydroxide keep the historic vessel preserved while researchers slowly and carefully chip away at the layer of concretion that built up around every inch of the interior and exterior as it sat for 136 years. Now, for the first time, the researchers are able to show off the interior of the Hunley as they continue to work on its restoration and solve the mystery of how and why it sank.

“There are a lot of unanswered questions about what really happened that night,” said project archaeologist, Michael Scafuri. “We have 90 percent of (the evidence), but we still can’t say conclusively (what happened).” 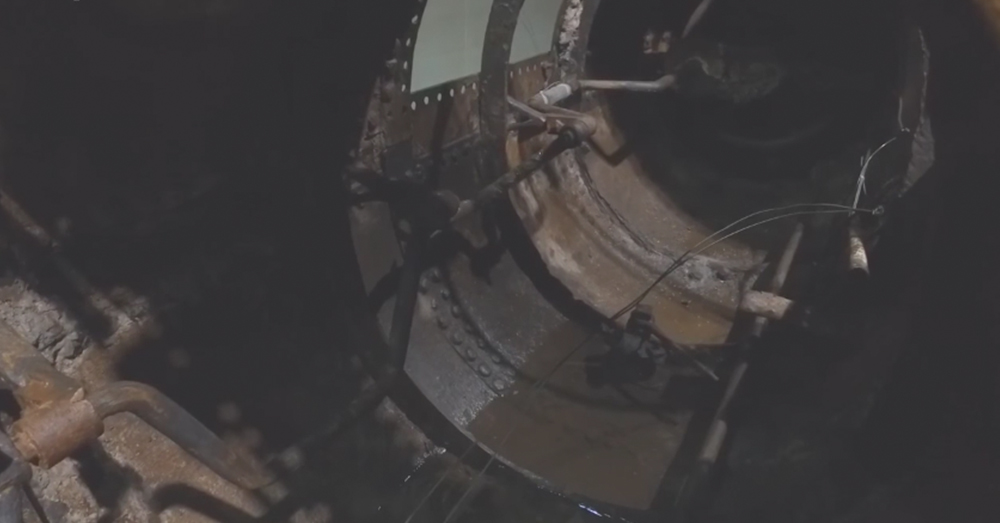 Despite the first logical conclusion that the men inside the Hunley drowned, all eight men were found still at their stations, indicating that they never tried to pump water out or escape the submarine. “That means there was no panic,” Scafuri said of their condition. And while they are still waiting to finish their work and find more evidence before drawing any conclusions, there are a couple theories that may explain what happened.

The most likely cause of death, it seems, was asphyxiation (lack of oxygen) instead of drowning. The first explanation of this would be that the men simply miscalculated how much oxygen they still had in the submarine and ran out while still submerged. Another possible explanation is that the explosion of the torpedo which sank the USS Housatonic may have taken place while the submarine was still close by and the blast knocked the men unconscious, and they then ran out of air.

As the restoration of the H.L. Hunley continues and researches discover more clues as to its final moments, the public can now see it for themselves at the Warren Lasch Conservation Center in Charleston. The first submarine in history to sink a battleship may have sunk in the process, but it was an event which would forever change naval warfare across the entire globe.

Take a look inside the H.L. Hunley in the video below!