Helping a stranger with something that they are not able to do on their own is always going to leave us with a good feeling. Perhaps we have done this ourselves on occasion and paying it forward in such a way is a great way to start or end your day.

The unfortunate thing about these acts of kindness is that they don’t often get recognized. The same would have been true for a manager at Chick-fil-A, except his co-manager captured the moment and shared it online. He had dropped everything to go out and help an elderly WWII veteran change a flat tire.

Daryl Howard is a Chick-fil-A manager in Maryland. An elderly man had come to the counter stressed out over his flat tire and he didn’t hesitate to help.

Chick-fil-A is often in the news because of the customer service they provide. When they hired Howard as a manager, it seems as if they made a great choice.

Howard went out right away and help the man. As it turns out, he was a WWII veteran. 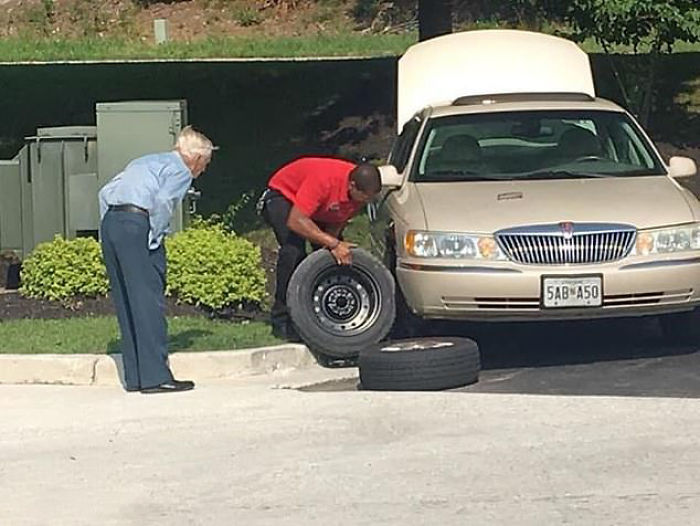 An elderly man approached Howard one morning when he was working behind the counter. According to Rudy Somoza, the comanager who took the picture, the senior was “shaking, almost in tears saying he barely made it to the store on three tires because one was bad.” He was barely able to finish the sentence by the time that Howard came out to help him.

It took about 15 minutes for Howard to change the tire and to make one customer very happy. It seems as if Mr. Lee visits Chick-fil-A regularly for a coffee and chicken biscuit. I would guess he’ll be back for more.