Evil is a mystery. It is often so heinous in its presentment that we are left speechless before it. The attack in Chattanooga, TN, is yet another example of this.

The Marine Corps and the nation mourn the loss of five good men as the result of a vicious and murderous act. These men went to work yesterday expecting to do their duties and to go home to their families after the normal day’s work was done. But evil would not have it that way. They were ambushed in a cowardly act in the familiar surroundings of their work place. 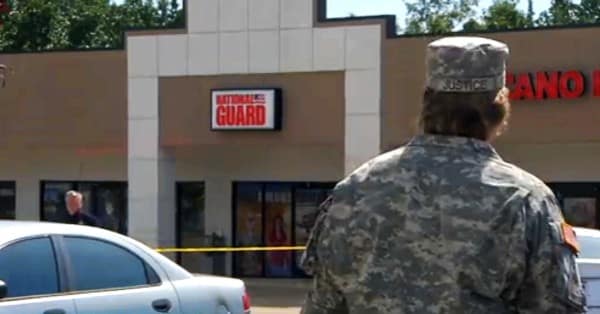 Though the perpetrator has been identified, I will not use his name here. Such a name does not deserve to be spoken or written in civilized society. We are drained with sorrow for their families and for this nation. We wish to remember those who fell as the good men that they were. We wish to offer our prayers and thoughts for their families. We want them to know that their soldiers will not be forgotten.

The fallen have been identified as of this morning. They are:

Gunnery Sgt. Thomas Sullivan, 40, was from Springfield, Massachusetts. He served in Iraq, was in the battle at Abu Ghraib, and was awarded two Purple Hearts and the Combat Action Ribbon. A friend of his, Josh Parnell, said of him: “There’s no Marine you would want that was better in combat than him.” Nathan Bill’s Bar & Restaurant, which is partially owned by Sullivan’s brother, posted on Facebook that his brother and fallen Marine, “was our hero and he will never be forgotten.”

Lance Cpl. Squire “Skip” Wells, 21, the youngest Marine killed yesterday, was from Marietta, GA. He had attended Georgia Southern University for a time, but felt called to enter the Marine Corps. A family spokesman is quoted in a Fox News Insider article as saying: “We don’t understand the whys. Senseless is a word used too often but this you can’t even hang your hat on.” Lance Cpl. Wells was a member of the Marine Forces Reserve.

Sgt. Carson Holmquist, was from Grantsburg, WI. He is a veteran of the war in Afghanistan.

Staff Sgt. David Wyatt, 37, was from Chattanooga. His home was decorated with American flags and was guarded overnight by Hamilton County Sheriff’s deputies, according to a report on Channel 4 in Chattanooga.

U.S. Navy Petty Officer 2nd Class Randall Smith was gravely wounded in the attack at the Naval Reserve Center. He succumbed to his wounds yesterday. Two others were wounded, including a policeman.

As I write this I am filled with a profound sadness for these men and their families. And I am angry. This is a bitter loss for the families, the Marine Corps and the nation. Our President, the Defense Department, and the Military Services need to respond to this with a renewed seriousness. This evil is real.

It is our desire here at The Veterans Site to add our sincerest condolences to the families of these fallen soldiers. We are glad to hear that the DOD has decided that they and their families are entitled to full military death benefits as they were on active duty. We hope that much more will be done to prevent such events in the future.

You will not be forgotten.