Charles Kettles is 86 years old now, but he remembers the events that took place on May 15, 1967 near the Tra Cau River in Vietnam very vividly.

Kettles was on his first tour in Vietnam as a UH-1H, Huey helicopter pilot with the 176th Assault Helicopter Company, 14th Combat Aviation Battalion. The events that took place that day would test his courage and his skills to the maximum. His efforts would save many lives, including the lives of eight soldiers who might have been left behind if it had not been for him.

On July 18, 2016, 49 years later, Kettles was awarded the Medal of Honor during ceremonies at the White House.

Kettles’ father was a military pilot who flew with the Royal Air Force (Canadian) in WWI and with the Air Transport Command (U.S. Army Air Corps) in WWII. Flying was in Kettles’ blood. He was drafted into the Army at age 21. After basic training and then Officer Candidate school at Fort Knox, KY he was commissioned in the Army Reserve. Kettles graduated from Army Aviation School in 1954 and served active duty tours in Korea, Japan and Thailand. He stayed in the Reserves and answered the call again in 1963 to serve in Vietnam. He attended Helicopter Transition Training at Fort Walters, TX, and was deployed to Vietnam in February of 1967. Kettles would ultimately serve two tours during 1967 and 1969-1970.

On May 15, 1967, Kettles, along with others in his helicopter unit, ferried 80 soldiers from the 1st Brigade of the 101st Airborne Division to a landing zone (LZ) near the Tra Cau River. Those soldiers were ambushed immediately by a large force of North Vietnamese Army troops (NVA). The fighting was very intense and within a couple of hours a request for reinforcements came in from the field commander. Kettles volunteered to fly those volunteers out to the battlefield and to pick up the dead and wounded. 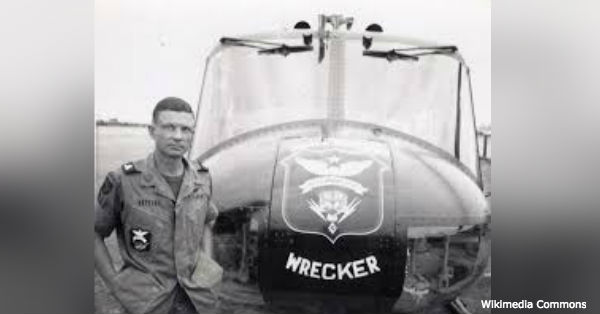 As they came into the LZ they immediately came under very heavy fire from the NVA. It was so intense and concentrated that many of the reinforcement soldiers were killed before they could exit the helicopters. Army artillery and Air Force air support in the area were unable to suppress the heavy NVA gunfire to any great degree.

Kettles’ helicopter, as well as all the others were being torn by rifle and machine gun fire as they dropped off troops and picked up the dead and wounded. Kettles let off his reinforcements and went back to the base to pick up more. He did this several times, coming under the fierce, raking fire of the enemy each time.

Witnesses on other helicopters reported that his helicopter was visibly losing fuel from a hit on his fuel tanks, but he was able to nurse his helicopter back to base. At that point he returned to the battlefield alone to pick up more of the wounded. He went without gunner or support, according to one of his injured crew.

At around 6 p.m. a call came in from the infantry commander for an immediate evacuation of the remaining 44 soldiers in the field, including four from Kettles’ unit whose helicopter had been shot down near the river. Kettles then volunteered to lead a six-helicopter flight scrambled together from his unit and one other. When they arrived they were met by the same focused and intense gunfire as before. 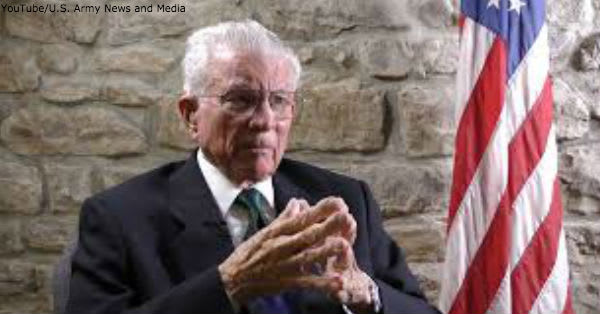 Touching down, the soldiers on the ground ran to the first available helicopters and scrambled aboard. Only one climbed aboard Kettles’ helicopter. Kettle was told that all were safe and accounted for, so he gave the signal to return to base. As he reached about 1,400 feet and was turning toward base, he got word that there were still eight soldiers on the ground. They had been down by the river in a desperate, last ditch defense position.

Kettle went back for them.

The artillery and air support had shut down by this time, so when Kettle dropped down to get the eight, he was the sole target for every enemy gun on the ground. His windshields were shattered. There was damage to both the tail and main rotor blades. All eight soldiers rushed aboard under the intense fire.

Kettles’ helicopter was damaged and now overloaded. He couldn’t get enough lift and had to skip the helicopter along the ground in an attempt to get enough speed to get her into the air. As he was doing this his tail was hit by another mortar, but to his surprise the bird kept doing what it was supposed to do. He finally got enough speed and lifted off. All made it back to base safely.

Kettles was awarded the Distinguished Service Medal for his conspicuous bravery at the time. His skills as a pilot and his courage, along with his determination to save his brothers on the ground came together to great success that day in May of 1967. And later, due to the determined efforts of an amateur historian by the name of William Vollano, who had been involved in the Veterans History Project interviewing veterans, Kettles’ case was reopened and it was determined that he had merited the Medal of Honor for his actions that day. At age 86, Kettles will be awarded with the Medal of Honor by President Obama in a White House ceremony on July 18, 2016.

Kettles’ has thought about that day often, but he does not dwell on it. Typically, he argues that all the others involved that day were just as deserving. But to him what really matters is, “The eight who got out of there, who aren’t on The Wall, that’s what counts.”

The Veterans Site expresses its deep respect and honor to you, Lt. Col. Charles Kettle. We thank you for your service to the country and for your courage and commitment to your fellow soldiers. This honor is well deserved. Thank you and…