Cena and Lance Cpl. Jeffrey DeYoung, of Muskegon, MI, served together in Afghanistan for just six months, but that’s all it took for an unbreakable bond to form.

DeYoung had fulfilled his obligation to the military and his faithful friend by helping Cena ford rivers and survive the cold desert nights, sometimes while under fire from the Taliban. According to Mlive, Cena returned the favor by comforting his handler after seven of his fellow soldiers were killed in less than a month.

When DeYoung was honorably discharged, Cena remained in service. It would be over four years before they would see each other again. And when the black labrador was retired in 2014, DeYoung jumped at the opportunity to adopt his furry veteran friend. 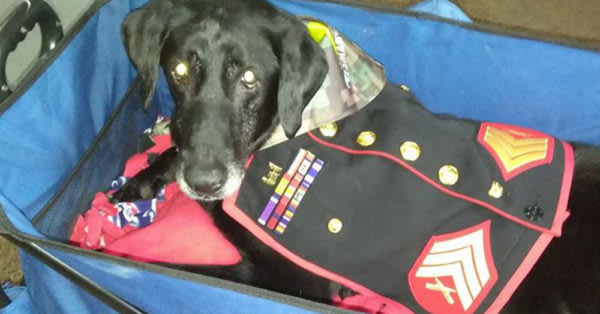 For the next three years, DeYoung and Cena cherished every moment together, this time without worry of enemy attack.

Sadly, however, Cena was targeted by another threat that DeYoung could not protect him from. Recognizing a slight limp, DeYoung took his dog to see a specialist, who diagnosed 10-year-old Cena with terminal bone cancer. 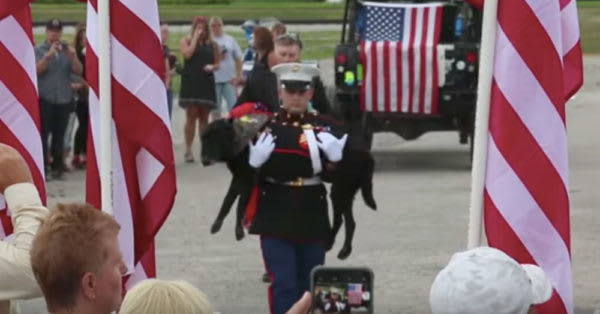 DeYoung spent the following days organizing a bucket list for his dog, which included riding in an open Jeep, before Cena would be put to sleep on July 26.

“My last night with Cena,” the former Lance Cpl. posted to Facebook. “Words cannot convey what I’m feeling and thinking. I want to run away and not face what I must do. But he needs me to be strong and set him free. He has blessed my life with love and admiring. Because of him, I got to have a family. Because of him, I was able to live. May God forgive me for what I do tomorrow. And may the Lord greet you with open arms and a nice ear scratch.”

“Goodnight my friend, goodbye my brother,” DeYoung continued. “May you rest your head tonight knowing how loved you are and how dearly you will be missed.”

Cena and DeYoung took their final ride together in a convoy of topless Jeep Wranglers from all over Michigan, while several of the state’s Patriot Guard Riders honored the dog in a silent flag line, FOX 17 reports.

“It’s overwhelming,” said DeYoung. “Of course, veterans always know you have to be early everywhere, but at the same time the amount of veterans and the amount of family that have showed up, it’s remarkable to say the least.”

Cena was able to cross the rainbow bridge dressed in his best, thanks to the help of a local business.

“Every Marine has to go out in a set of dress blues,” DeYoung said before wishing a heartfelt farewell to his brother in arms. “That’s just the way we are. He’s got his ribbons, he’s got his decorations, he’s dressed to the nines. He got a fresh grooming service today, and we are ready to make peace with what we have to do.”

While he spent most of his time in the military operating a tank, one former Army specialist is taking to the skies to rescue animals around the country. Click the button below to read about his amazing efforts to keep shelter pets from euthanasia.