Take A Tour Of The Massive C-5 Galaxy, A Wonder Of Modern Technology

I knew this plane was big, but that word does not really cover the reality. This thing is like a flying city block.

It’s one thing to have its dimensions described, or to hear that it has this compartment and that, but to actually get inside one of these behemoths, to be given a tour of its inner architecture is truly mind-boggling.

The C-5 Galaxy is a wonder of modern technology. It can haul twice as much cargo as any other airlifter in the world. This video gives a guided tour through the interior of this incredible machine. You’ll see how it can carry up to 75 troops in comfortable seating, matching or better the comfort and legroom of commercial airliners. All of this is on an upper deck above the cargo bays. It has sleeping quarters for the crew, and a high-tech operation center.

But that is just part of this huge plane. 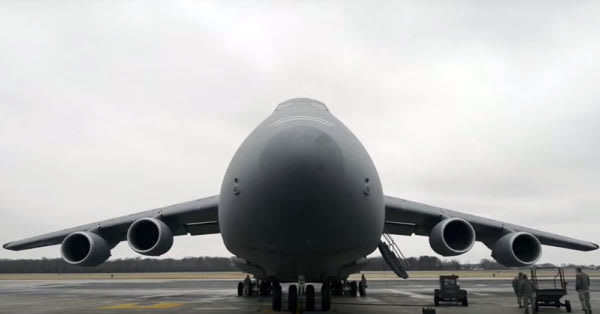 Air Force Staff Sgt. Marsh at Dover Air Force Base will show you its compartments, with the casual humor of one who knows and has a familiar affection for the machine he works on, inside and out. He’ll give the dimensions and describe the technologies that are incorporated, but the sheer size of the thing will become evident as he takes you through its interior.

The C-5 has 28 wheels to land and take off on, and a massive hydraulic system to lift and lower the entire plane in order to accommodate various loading and unloading procedures.

Enjoy this video and the Staff Sgt.’s repartee. You will get a good sense of the power, the massiveness, and the value of the C-5 Galaxy cargo plane