A heartbreaking moment was captured in photos and videos and shared to social media this week, as the body of fallen Sailor Brooke Newton, 25, was removed from a Delta flight and given to her family. While Brooke’s cousin captured video of fellow sailors saluting and carrying her flag-draped coffin, one of the passengers on the airplane captured a photo of her parents crying over the casket.

That post on Facebook, which described the event and the reaction of the fellow passengers on the plane, touched the nation as the post has been shared on social media hundreds of thousands of times.

“I saw no division on that plane last night. I saw Americans paying respect to their countryman. A woman who put her life on the line for me, and you, and your freedoms.”

, 25, was a United States Navy Aviation Boatswain’s Mate assigned to the USS Enterprise. According to her obituary, she was born at Tinker Air Force Base in 1992. After graduating high school in 2010, Newton joined the Air National Guard. She would then go on to study at the University of Central Oklahoma before joining the United States Navy.

A now viral photo of Newton’s final trip home to rest was captured in a beautiful post on Facebook by passenger Mike Helms. Along with the photo, Helms wrote an amazing description of what occurred and how he and fellow passengers on the plane were moved by what they saw. 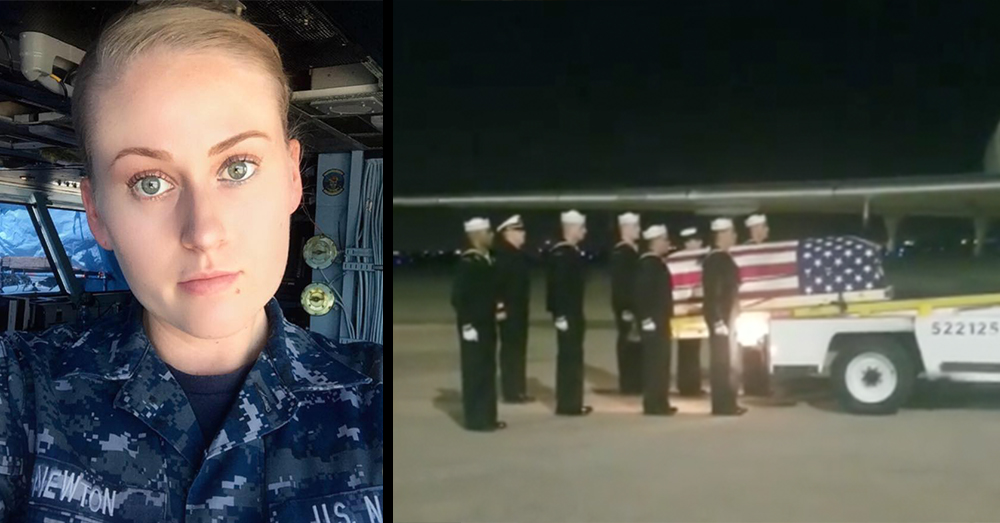 “My plane landed in Oklahoma City last night. When we stopped at the terminal, the pilot announced that he would like to inform us that we were flying one of our fallen soldiers home to her family. He asked that we remain on the plane until our soldier was removed from the plane first. He also asked that we give a moment of silence,” Helms wrote on Facebook. “As we sat there waiting, I decided to look out the window and this is what I saw. A mother and father hysterically crying on their fallen soldiers [sic] casket. Standing off to the side were soldiers from her unit saluting their fallen soldier.”

Helms continued, “This moment hit me hard for some reason. I couldn’t hold back tears. As I looked around the plane, I was hoping nobody would see my moment of weakness but to my surprise, damn near everyone on the plane was crying.”

“As I looked around… damn near everyone on the plane was crying.”

“The woman standing next to me was Muslim, I assume because of the hijab she wore. She was in tears and she tried consoling the woman next to her. The plane was filled with people of all races and religions. It was amazing to see everyone on that plane pay tribute to this woman and her family,” Helms said in his Facebook post. “The media is what divides us. I saw no division on that plane last night. I saw Americans paying respect to their countryman. A woman who put her life on the line for me, and you, and your freedoms.”

The loss of any service member in the United States Armed Forces is tragic and heartbreaking. The Veterans Site offers its condolences to the family, friends, and shipmates of Brooke Newton. We as a nation and as individuals owe a debt we can never repay to all those who lay down their lives in service to our country, making the ultimate sacrifice for our freedom.