They came from Puerto Rico, they fought for the United States, and they served their country proudly in Korea.

Now over 60 years after the valor of this 65th Infantry regiment, nicknamed the Borinqueneers, was recognized with a Congressional Gold Medal. 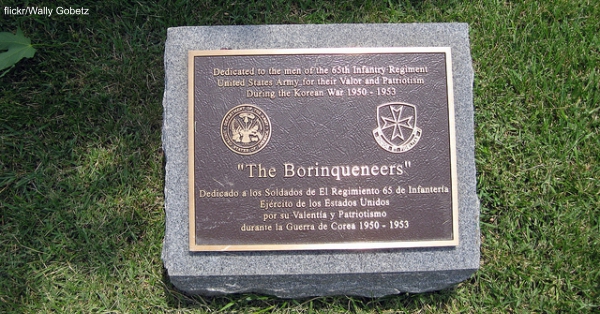 Over 250 Borinqueneers traveled to Washinngton, D.C. to take part in the ceremony, where President Barack Obama spoke. He brought up the fact that, like the Tuskeegee Airmen or Navajo Code Talkers, the Borinqueneers’ 65th Regiment “experienced segregation that set them apart from their fellow soldiers, but their courage made them legendary,” Obama said.


The veterans that spoke at the ceremony shared stories of camaraderie, bravery, and even bouts of PTSD, but they all made it known that they served their country proudly.

“We had a lot in common. We could talk about baseball, about the music of Puerto Rico,” Raul Cardona, a corporal during the Korean War, remembered.

An hour-long film about the Borinqueneers was made by El Pozo Productions in 2007. It won several awards, and since then has been translated into Spanish and broadcast on Puerto Rico’s public broadcasting network, as well as to more than 850,000 U.S. troops overseas.

The Borinqueneers have served as American soldiers in many wars, not all of which are remembered fondly. The longest running war in American history, the Vietnam War, claimed the lives of 58,000 soldiers and yet veterans from that war still struggle. By signing this petition, you can help honor their service.