Bob Dole, former Kansas Senator and World War II veteran, was the man of honor on Wednesday when he received the Congressional Gold Medal. The prestigious award is given out by Congress “as its highest expression of national appreciation for distinguished achievements and contributions.” It is the highest honor given by Congress to civilians. Former recipients include President George Washington, Winston Churchill, and Mother Teresa of Calcutta.

Now the honor has been bestowed upon Bob Dole, who was a leader in the passage of the Americans with Disabilities Act and is known for his bipartisan work during his tenure in Congress. His Congressional Gold Medal distinguishes him as a soldier, legislator, and statesman.

This isn’t the first time the former Senator has been honored with medals and awards, though. In 1989, President Ronald Reagan awarded Dole with the Presidential Citizens Medal. That was followed in 1997 by President Bill Clinton with the Presidential Medal of Freedom, the nation’s highest civilian award given by the president. Dole, who fought in the U.S. Army during World War II, also received the Bronze Star and two Purple Hearts for his military service.

“Bob earned his place in the chronicle of American legends by the time he was 21. And in the decades since, he has never stopped earning his place in the pages of American history,” said President Donald Trump at the award ceremony. He added, “You are a patriot, a hero, a leader — and, today, you have become a recipient of the Congressional Gold Medal. It’s an honor to be with you, Bob.” 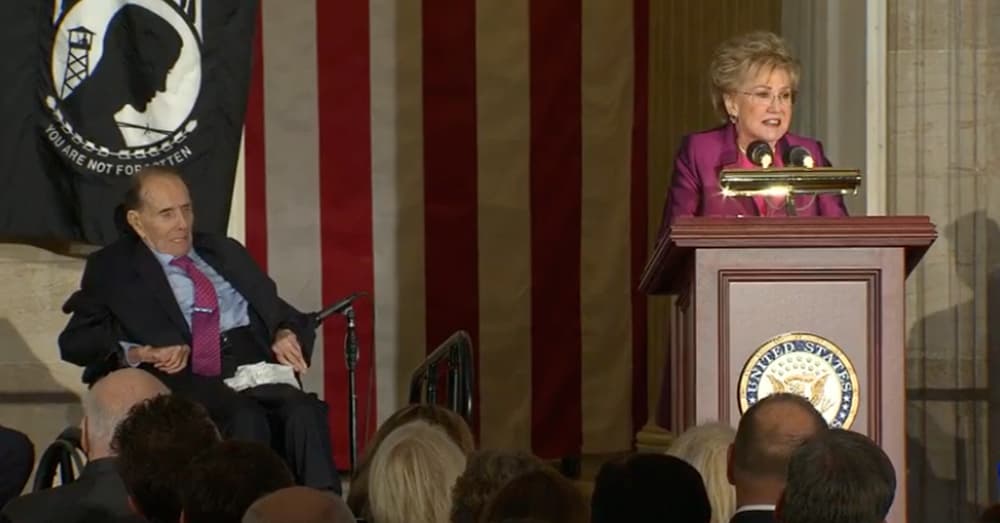 Born in 1923, Bob Dole briefly attended the University of Kansas starting in 1941 but left to join the U.S. Army to serve in World War II. He was assigned to the 10th Mountain Division in Europe. During the spring of 1945, Dole and the rest of his unit were in Italy fighting the Nazis. While taking a hill near the Apennine Mountains covered by snipers and machine gunners, Dole was severely injured from exploding shrapnel. He lost most of his right shoulder and suffered spinal injuries that left him paralyzed in the right arm and partially paralyzed in his left.

Following the war, Dole returned home, where he became an attorney. He was first elected to the House of Representatives from Kansas in 1960 and then was elected to the Senate in 1968, where he served until retiring in 1996 as the longest-running Republican Senate leader. His accomplishments in Congress included the Americans with Disabilities Act of 1990, along with work with Social Security and the McGovern-Dole International Food for Education and Child Nutrition Program. 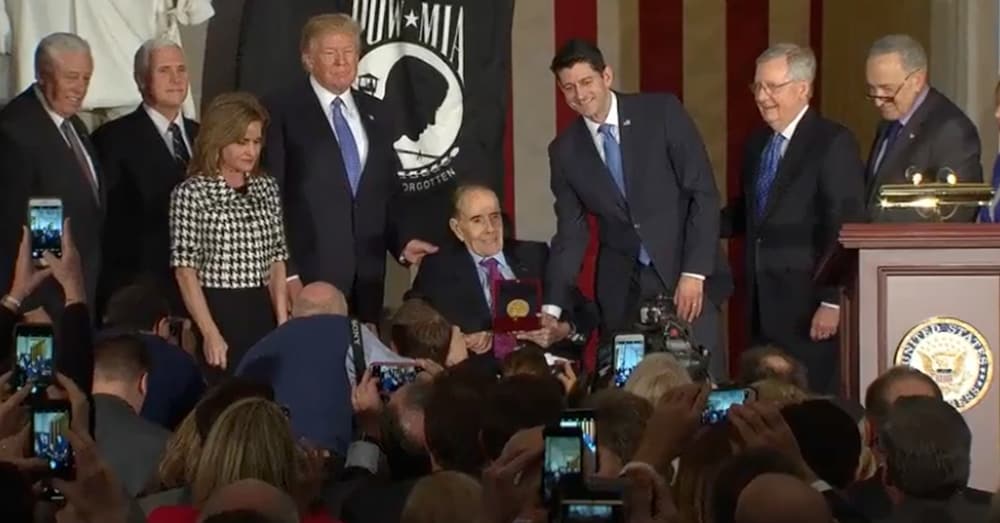 Following his retirement from the Senate, Dole remained active as a political commentator, lobbyist, author, and advocate. Dole also was the leader behind raising funds for the National World War II Memorial in Washington, D.C.

The Congressional Gold Medal was presented to Bob Dole in a special ceremony at the U.S. Capitol, with House Speaker Paul Ryan having the honors of presenting him with the medal. A number of leaders from both sides of the political aisle spoke in praise of Dole and the ceremony. Rep. Ryan said, “Bob Dole always stood for what was just and what was right. Because of you, America is much better.”

Dole, 94, spoke only briefly at the ceremony. His wife, Elizabeth Dole, read prepared remarks on behalf of her husband. Dole joked, “I want to thank all those who’ve said such kind words about me. They’re probably not true, but they were nice.”