For Over 100 Years, This Infantry Division Has Fought For Our Freedom

The 1st Infantry Division is one of the most storied units in U.S. military history. This is the oldest continuously active division in the United States Army and has served the country since 1917. In that time it has always been at the forefront, often being the first to make its presence known to the enemy.

In 1917, when the United States could no longer remain neutral in the war going on in Europe, Maj. General John J. Pershing was ordered by President Woodrow Wilson to put together four infantry regiments and one artillery regiment and to take them to France to enter into the struggle against Germany.

Pershing added a second artillery regiment and called his new Division the 1st Expeditionary Division. This new division trained quickly alongside their French counterparts and took over one of the sectors of the Front facing the Germans. 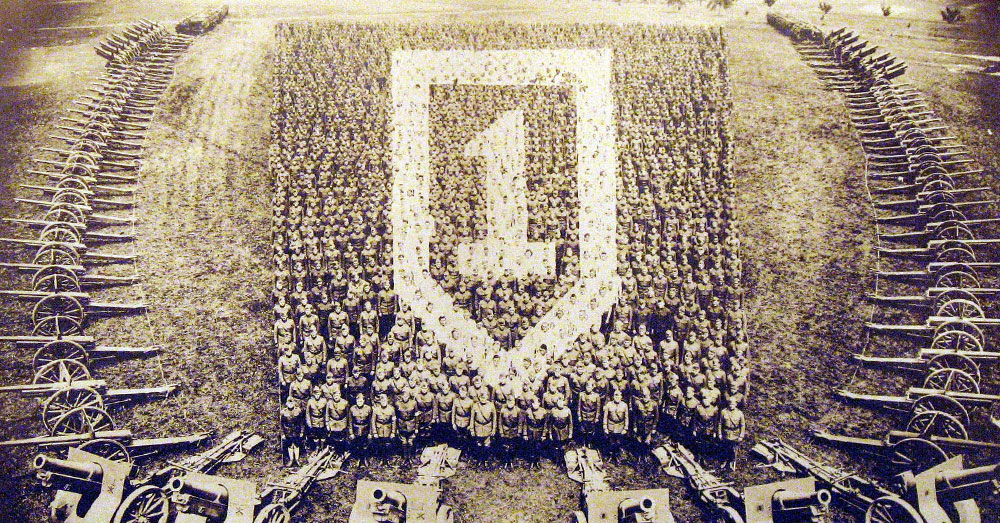 Given the new technologies that were brought to bear in WWI, the machine gun, the tank, aerial bombing and chemical warfare, the 1st Expeditionary Division fought fiercely and with great determination. In the short time that American forces were engaged in WWI, the 1st Expeditionary Division fought through as many as eight German divisions and suffered more than 7,600 casualties.

It was at this time that the 1st Expeditionary Division received the “Big Red One” shoulder patch that they still wear today. 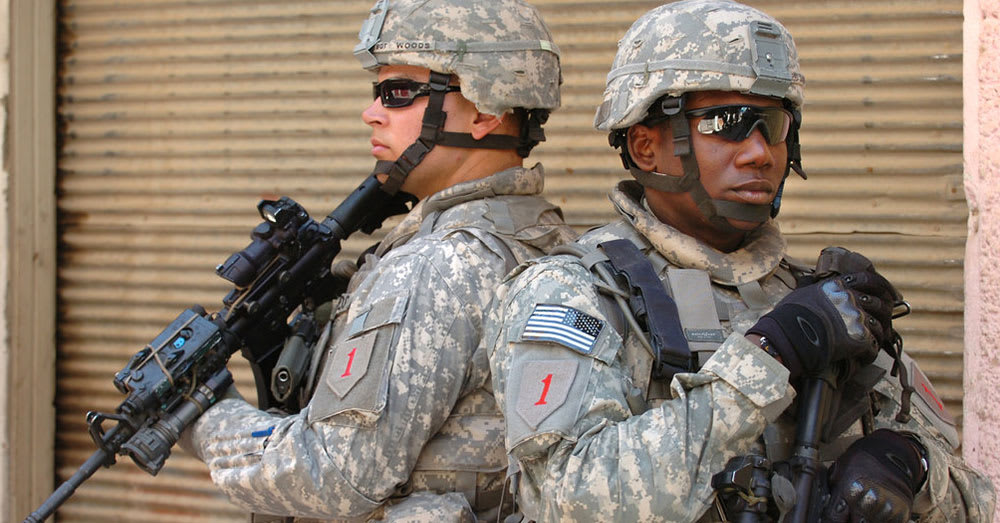 In WWII they would be designated as the 1st Infantry Division. Their first action would be in North Africa where they took part in Operation Torch, America’s first major offensive of WWII. They were instrumental in helping the allies defeat General Rommel’s German forces in North Africa and to cut off supplies to the Axis forces in Europe. They would go from there to participate the landings on Sicily in Operation Husky to begin the struggle liberate Italy from fascism.

But the Big Red One was not done yet.

They would take part in the largest amphibious assault in history when they went ashore at Normandy as part of Operation Overlord on June 6, 1944. They were assigned to go ashore at Omaha Beach. The weather was not good and the original plan was made difficult so they were forced to scale 100-foot-high cliffs in order to attack the German defensive forces from the rear. 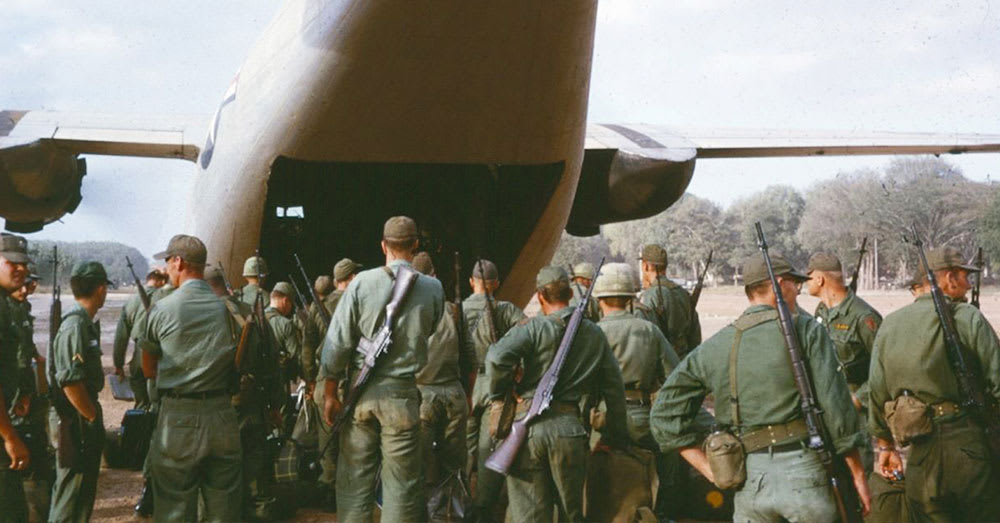 Source: flickr/mannhai
Soldiers from the Big Red One in Vietnam, waiting to board a flight.

They accomplished this herculean effort at great cost, but they would continue on with the invasion carrying the fight to the Germans fighting from one hedgerow to another through France. They would meet the Germans massive and fierce, last ditch counterattack head on at the Battle of the Bulge. Then they would continue on into Germany pushing toward Berlin, finding and liberating concentration camps as they went.

During the Korean War the Big Red One was held in Europe to prevent any attacks from the Soviet Union. And during the rest of the Cold War they would be deployed to various locations, like to Florida in 1961, during the Cuban Missile Crisis, and to Berlin again to prevent a feared Soviet invasion to take West Berlin. 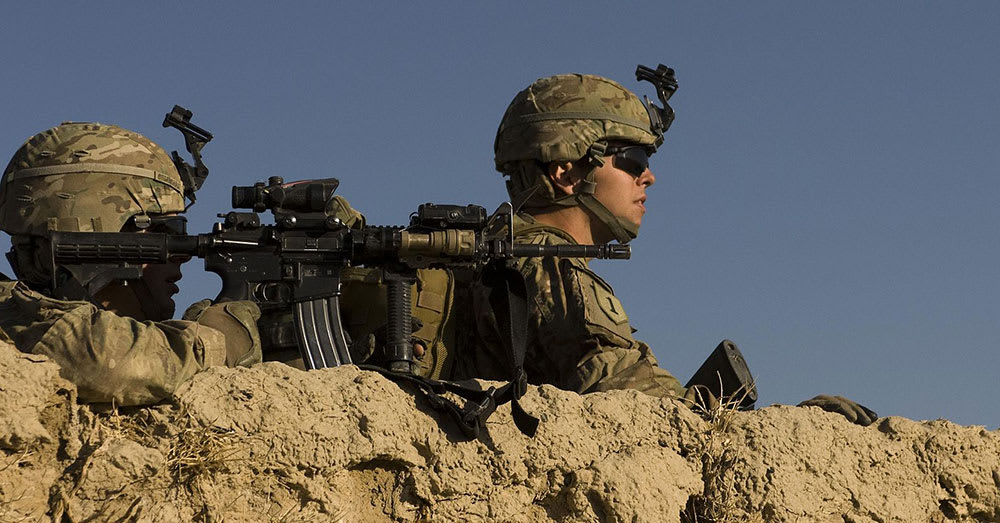 Source: Wikimedia Commons
Soldiers from the Big Red One in Afghanistan.

The second brigade of the 1st Infantry Division, (the “Big Red One”) became the first element of any infantry division to enter into Vietnam. They would take part in Operations Hump, Bushmaster I and Bushmaster II in 1965 and Operations Marauder, Crimp II, Rolling Stone, and Attleboro in battles at places like Ap Tau O, Srok Dong, and Minh Thanh Road in 1966.

In 1967 they would suffer 58 KIA at the battle of Ong Thanh. During the Tet Offensive of 1968, they would be deployed to protect several U.S. positions around South Vietnam and would take part in the largest operation of the Vietnam War in April of 1968.

On Sept. 13, 1968, the Big Red One would suffer the loss of its’ Division Commander, Major General Ware, who was killed in action when his helicopter was shot down by enemy fire. The Fighting First would continue to participate in several operations in 1969 when they also started efforts to turn combat operations over to the South Vietnamese, and still fought battles along Highway 13, nicknamed “Thunder Road” through the end of that year. 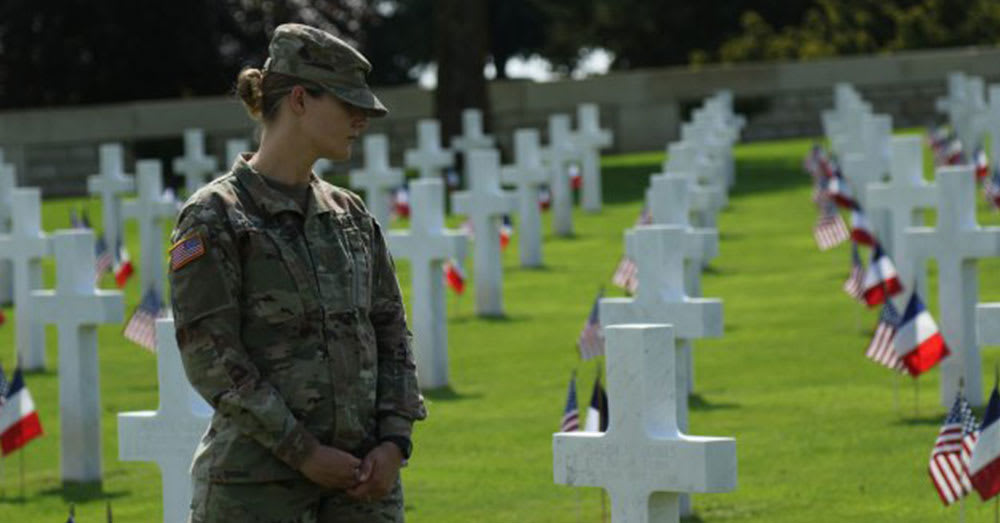 Source: U.S. Army
Gravestones of those who served with the Big Red One in WWI.

1991 saw the Big Red One called upon again in Desert Storm. Once again, they would be among the first in the fight. They were called upon to lead the spearhead into Iraq starting on February 24. They were the first to break through the massive defensive berm that Iraqi forces had built across their southern desert. They would then encounter the Iraqi 26th Infantry Division and overwhelm it, taking up to 2,500 prisoners before allowing other coalition forces to pass.

The Big Red One would also take on one of the Republican Guard Divisions and other units. Over the next three days they would engage with as many as 11 enemy divisions capturing up to as many as 11,400 Iraqi troops before the war ended on February 28. That was more than twice as many POWs taken by any other divisions had taken.

The 1st Infantry Division has served in both Iraq and Afghanistan in the post 9/11 wars. During the Iraq war they helped secure the area of Iraq known as the Sunni Triangle. They took the lead in Afghanistan from the 1st Cavalry Division on April 19, 2012.

The Veterans Site wishes to express our respect and our thanks to all who have served with and who continue to serve with The Big Red One, 1st Infantry Division of the United States Army.

As the oldest continuous active division in the U.S. Army, they have proven their valor and their expertise for over 100 years.

You have honored your motto well: “No mission too Difficult. No Sacrifice too Great. Duty First!”