Why It’s So Meaningful To Retire A Battalion Flag

Recently I had the honor to participate in a very special event at the National Museum of the Marine Corps in Triangle, VA, outside of the sprawling Quantico Marine Base. About 150 people attended the event to honor the veterans of 3rd Reconnaissance Battalion, 3rd Marine Division, who had served with that unit during the Vietnam War.

The reason for the gathering was to retire and transfer our Vietnam era flag to the museum where it will become part of the collection. We were also there to unveil a plaque honoring the Battalion to be permanently displayed along the peaceful, leafy path called the “Legacy Walk” that meanders through the woods and hills on the beautiful museum’s grounds. 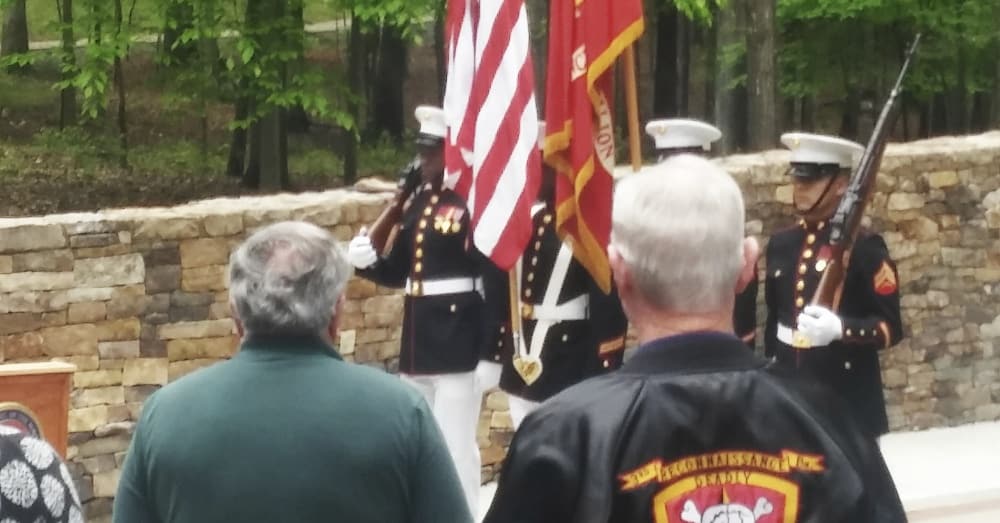 Photo from the ceremony courtesy of Dan Doyle

The Ceremony Opens With Respect

The small crowd that gathered for the event included wives and some of the adult children of the gathered veterans as well as Marine Corps and Museum officials. The Battalion Chaplain, Gil Gibson, opened the ceremony with a prayer remembering those who had fallen and those present. There were tears as his voice quavered slightly with his own emotion. Those emotions seem to come more easily and readily to us now in our older years.

Major General Donald R. Gardner, USMC —who had been a Co. Commander for Charlie Co, 3rd Recon Bn, in Vietnam and would go on to end his career as Commanding General of the 3rd Marine Division— was the guest speaker. His remarks were charged with the history of the battalion and his own memories of his time with it. The Charlie Co. guidon flag from Vietnam was also retired to the museum at this ceremony.

3rd Recon Battalion’s accomplishments in Vietnam were many. 2,800 Marines and Corpsmen served under the battalion’s colors that were retired to the museum at this ceremony. As the “eyes and ears” of the Marine Amphibious Force and the 3rd Marine Division, the men of this battalion paid a dear price in service to the nation. 1,333 Marines and Corpsmen were killed, wounded or missing during the battalion’s service in country. The battalion suffered a 40% casualty rate, which was equivalent to that of many of the regiments who fought at Gettysburg, the bloodiest battle of the Civil War. But the Viet Cong and the North Vietnamese troops knew and feared the small, lightly armed patrols of the 3rd Recon Battalion. During the battalion’s time in Vietnam 4 Medals of Honor, 13 Navy Crosses, 72 Silver Stars, and 56 Bronze Star were awarded to its Marines and Corpsmen. 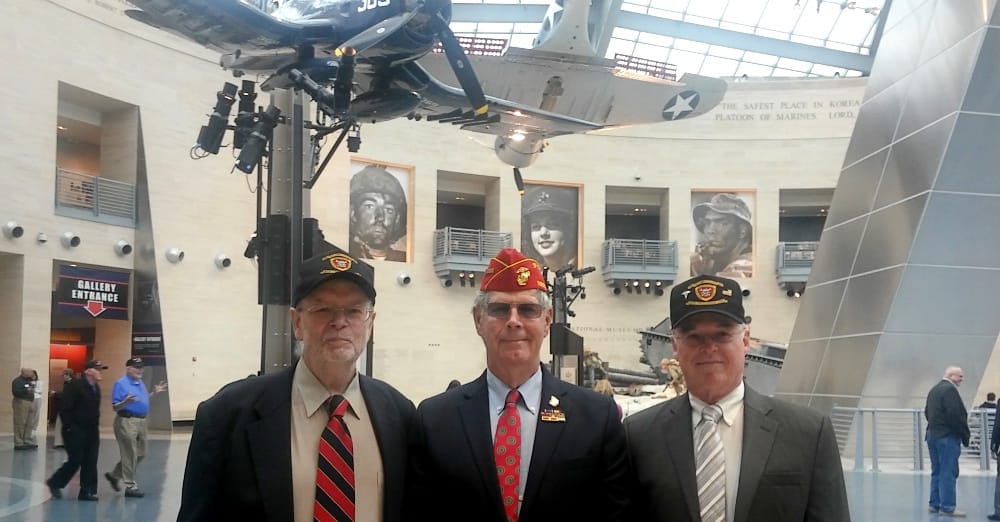 From left to right: “Doc” Winters, Sgt. Leland Upshaw, and “Doc” DAN Doyle at the ceremony

When we were young men…

We 3rd Recon Battalion veterans were very young men when we patrolled and fought together in the steamy jungles, the rolling, elephant grass covered hills, and coastal plains of Quang Tri Province, in the I Corps area of South Vietnam. Bravo Co. endured the long siege at Khe Sanh during the Tet offensive of 1968. Five decades have passed behind us since then.

At this event we came together as a gathering of old men. We had reunited, once again, to remember that time in our lives when we faced the challenges and fears of lonely patrols and fierce combat together against a determined enemy. We were full of good cheer in each other’s presence. We also bore with us the long held sorrows of loss for those heroes who had fought so hard with us there, but who did not come home. Those who have experienced the horrors of combat know the peculiar bond that exists between men who have survived and lived on with those memories.

50 years ago we were thrown together as strangers and, after surviving the terrible crucible of combat together, we came away a band of brothers like no other. You may have heard the phrase more than once: “Once a Marine, always a Marine.” It is not just a phrase to Marines; it is a felt truth, a reality. That identity lasts a lifetime. That was clearly evident amongst the attendees.

Those of us who attended the event felt great pride for our history together. The respect and the honor given to the 3rd Reconnaissance Battalion meant a lot to all of us. We have accepted the fact that this momentous time in our lives, and the battalion’s role in Vietnam, is now 50 years in the past. We have lived long and productive lives, raised families, and are now, for the most part, experiencing the joys retirement and grandchildren. We know that we are the lucky ones. We have never forgotten those that we knew so well, who “gave the last full measure of their devotion.” Those who did not come home with us remain forever brave and youthful in our memories. And when we think of them, we can not hold back the tears of loss and sorrow. They were, and remain, our real heroes. 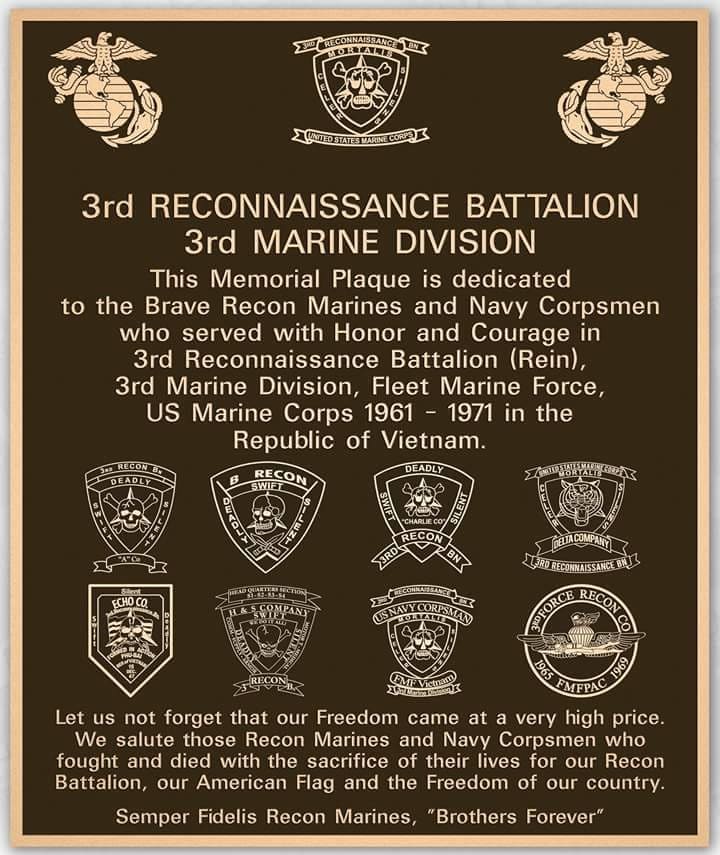 The dedication of the plaque

When the speeches were finished they were followed by a brief ceremony involving a Marine Corps Color Guard, the playing of the National Anthem and the Marine Corps Anthem. All of it was carried out with the usual Marine Corps precision, formality, and dignity. After the formal passing of the colors to the museum was complete, the plaque dedicated to us was unveiled by a Corpsman and a Marine. When the event was completed, my company, Bravo Co., which had the largest contingent of veterans at the event, gathered for a Company picture. While the cameras clicked one of the men started singing the Marine Corps Hymn and the rest of us spontaneously joined in with enthusiastic, if less than melodic voices. Afterwords, we all went back into the museum to lift a few libations in the museum’s Tun Tavern.

The Veterans Site offers its thanks and respect

to the men of 3rd Reconnaissance Battalion, 3rd Marine Division, for their service to the nation during the war in Vietnam. We wish to honor the National Museum of the Marine Corps in Triangle, VA, as well.

Semper Fi to all the Marines and Navy Corpsmen who served together so well in this storied and well honored unit.