Stock photos are a great resource for a lot of people and organizations who want to convey just the right message, feeling, or image but can’t get a photograph of their own. A story or advertisement about an elementary school, for example, might make use of a great stock image of children having fun while learning in a bright & colorful classroom, rather than having to set up a photo session at a nearby school and get all the necessary permissions and arrangements. When it comes to stock photos of the military, there are, unfortunately, a lot of images that miss the mark.

In fact, they don’t just miss the mark, they miss the whole target and sometimes may not even be at the right shooting range. These poorly executed photos do an injustice to our brave men and women in the military and can sometimes completely misrepresent what our military is and looks like. But, quite frankly, a lot of these stock photos are just so bad at accurately depicting the military that we just have to laugh at them!

Here’s a collection of some of the best bad “military” stock images out there. 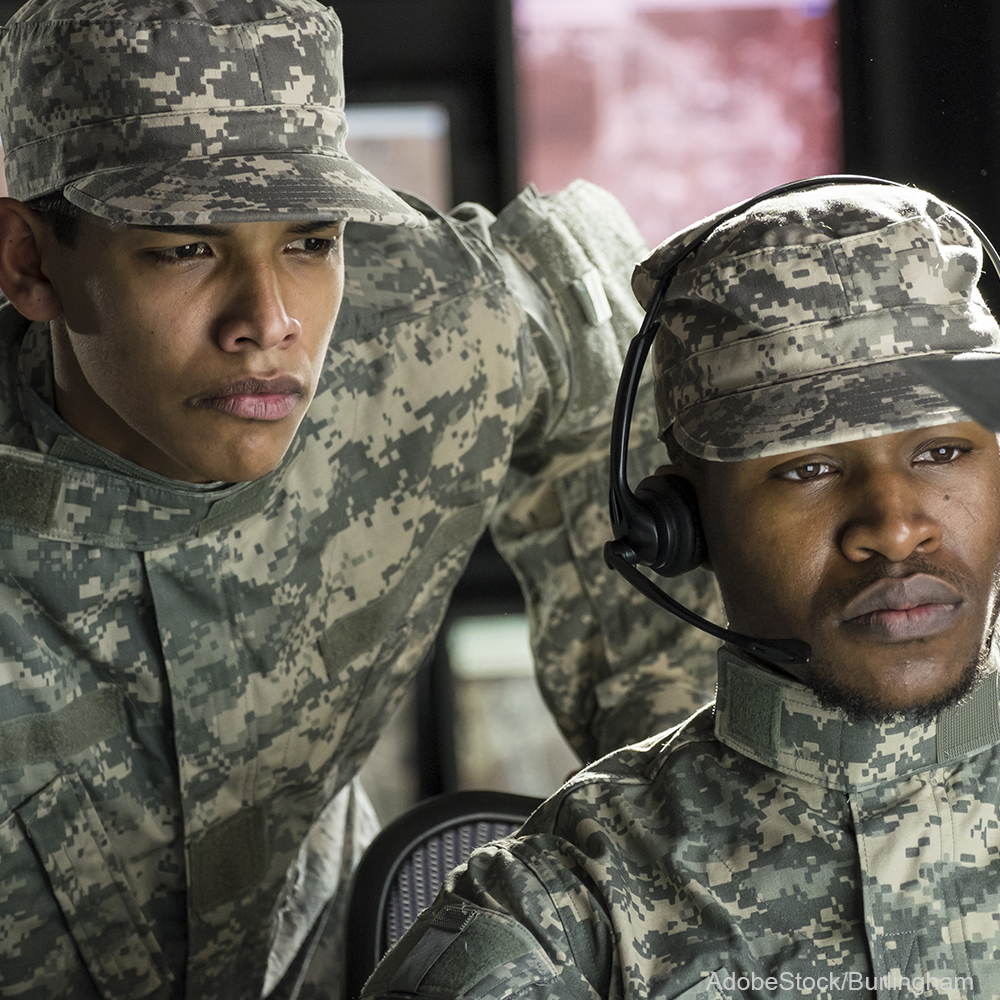 Let’s start with an easy one here: it’s two men in uniform who are supposed to be drone operators. The facial hair on the man on the right would never be allowed in the Armed Forces. Next there’s the complete lack of any name, rank, or service insignias. Collars up is a mistake as well. Lastly, I hope I’d never see a drone operator look that confused! 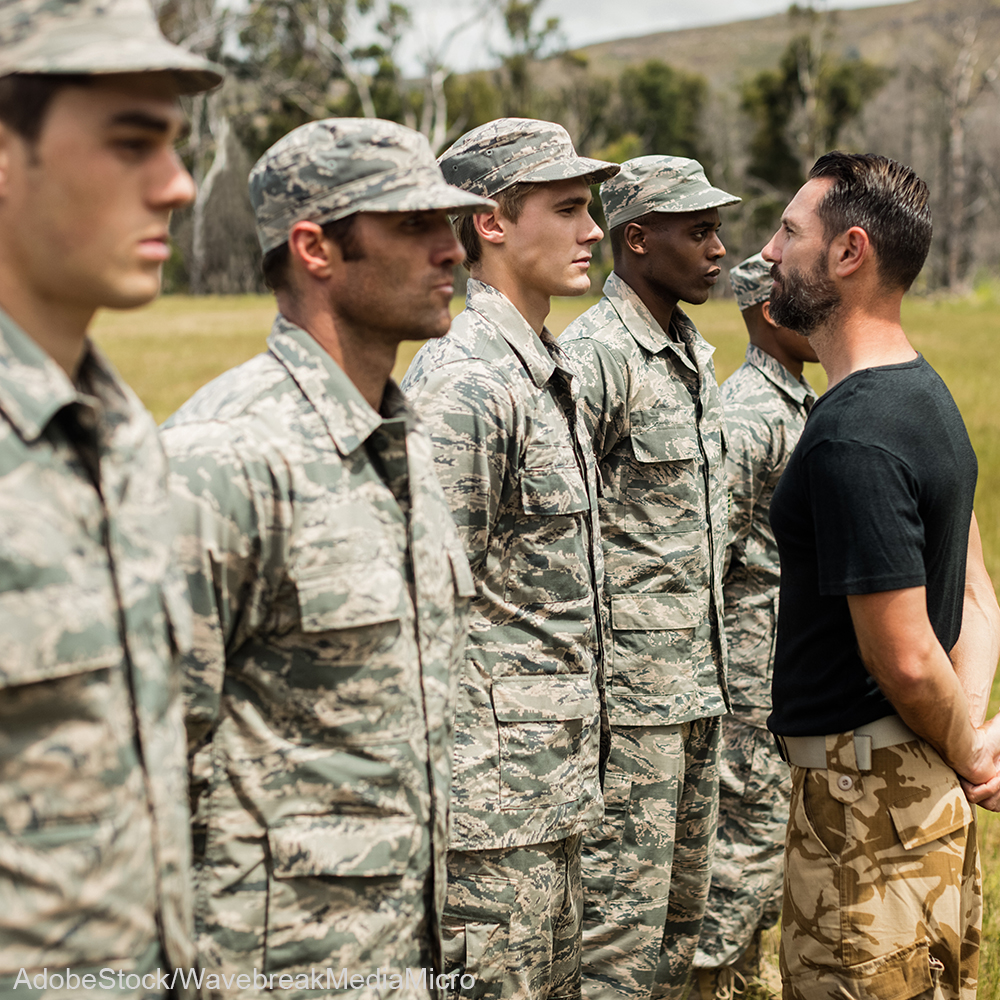 In this stock photo a group of recruits are being yelled at by their drill instructor. Unfortunately, neither the recruits nor the drill instructor are in the U.S. military based on their uniforms (which are different for some unknown reason). There’s also the bad hair cuts that would mean trouble for the life of any recruit. And again we see various types of facial hair from a full beard on the drill instructor to guy who hasn’t shaved in a couple days.

4. There was a sale at the Army surplus store 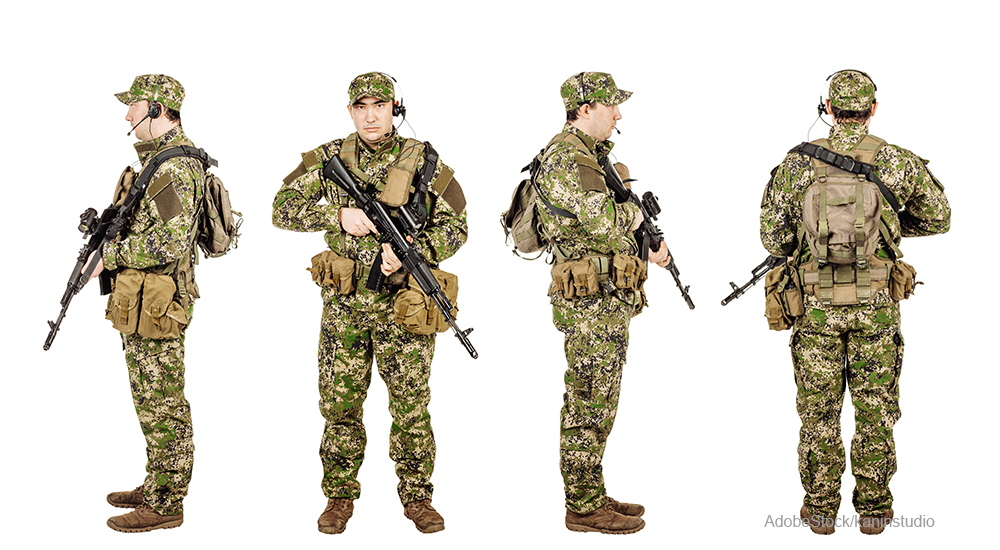 This 360 degree stock image of a soldier is just bad all the way around. Let’s start from the bottom and work up. The boots he is wearing (without the pants tucked in) are nowhere close to military issue. Then there’s his actual fatigues, which have a camouflage pattern from some other country. All that gear strapped to him might be nice for carrying lots and lots of stuff, but it is mismatched, out of place, overdone, and just wrong. No name or service insignias are visible. To top it off there’s the headset he forgot to take off from his other job as a telemarketer. The finger on the trigger is a nice way to shoot someone’s foot off too.

Click through to the next page – the best (or worst) are yet to come!
3. A little too gung-ho 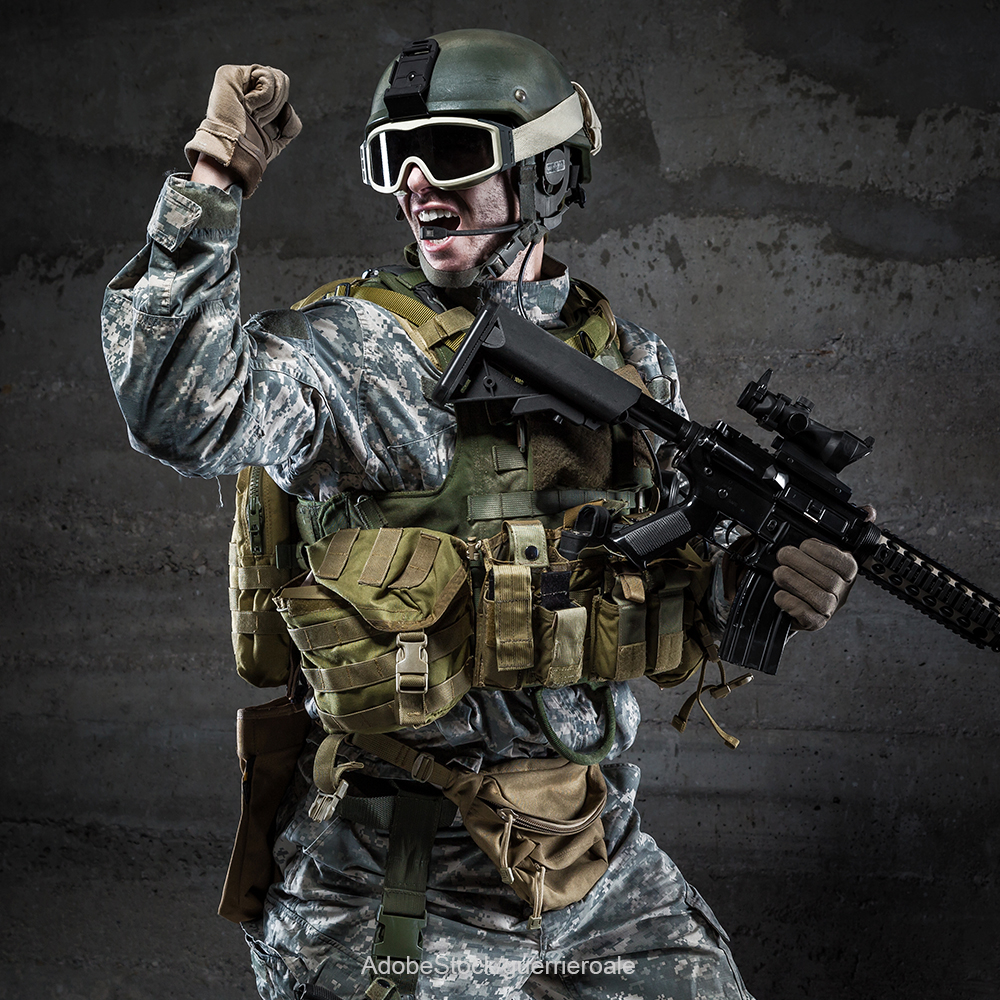 This “American Soldier” certainly shows a lot of enthusiasm for his service, but it’s easy to see without looking too hard (don’t look too hard) that it’s all a bit over the top. We see bags on top of bags on top of bags… my personal favorite is the fanny pack. Are those ski goggles? And why is he unshaven too? This one came close to the mark, but then took a few leaps over the line. All he’s really missing is a cape blowing in the wind behind him.

2. They’re bad and they ought to know it 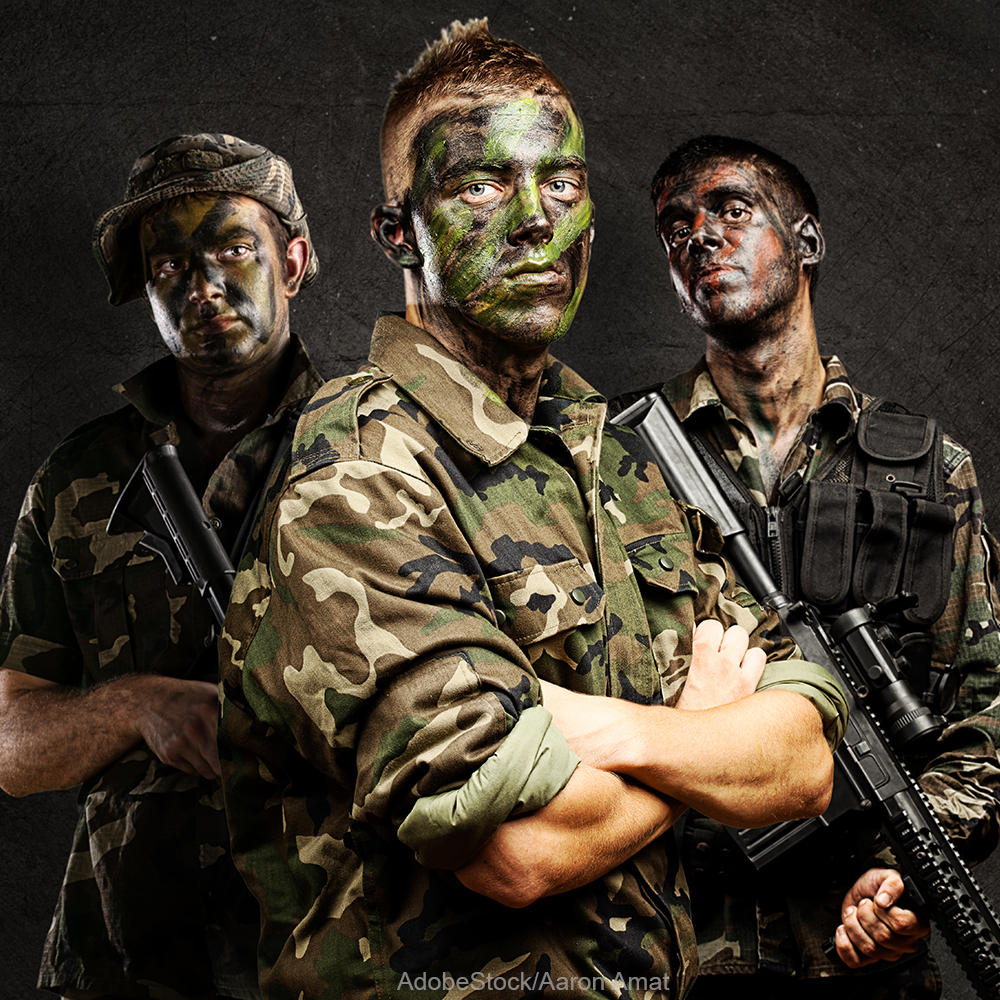 This stock image of three soldiers might look pretty hardcore at a glimpse, but this one is really just ridiculous. From the bad face painting (mismatched with the guy on the right) to the haphazardly rolled sleeves on what may or may not be actual military fatigues, these guys are probably the kings of the local paintball range, but that’s about it. No insignias, the cover of the left is just plain wrong, and the lack of coordination between what any of them are wearing is ridiculous. Our troops are as tough as they come – they don’t need a caricature to make them seem any tougher.

1. Is it Casual Friday for female troops? 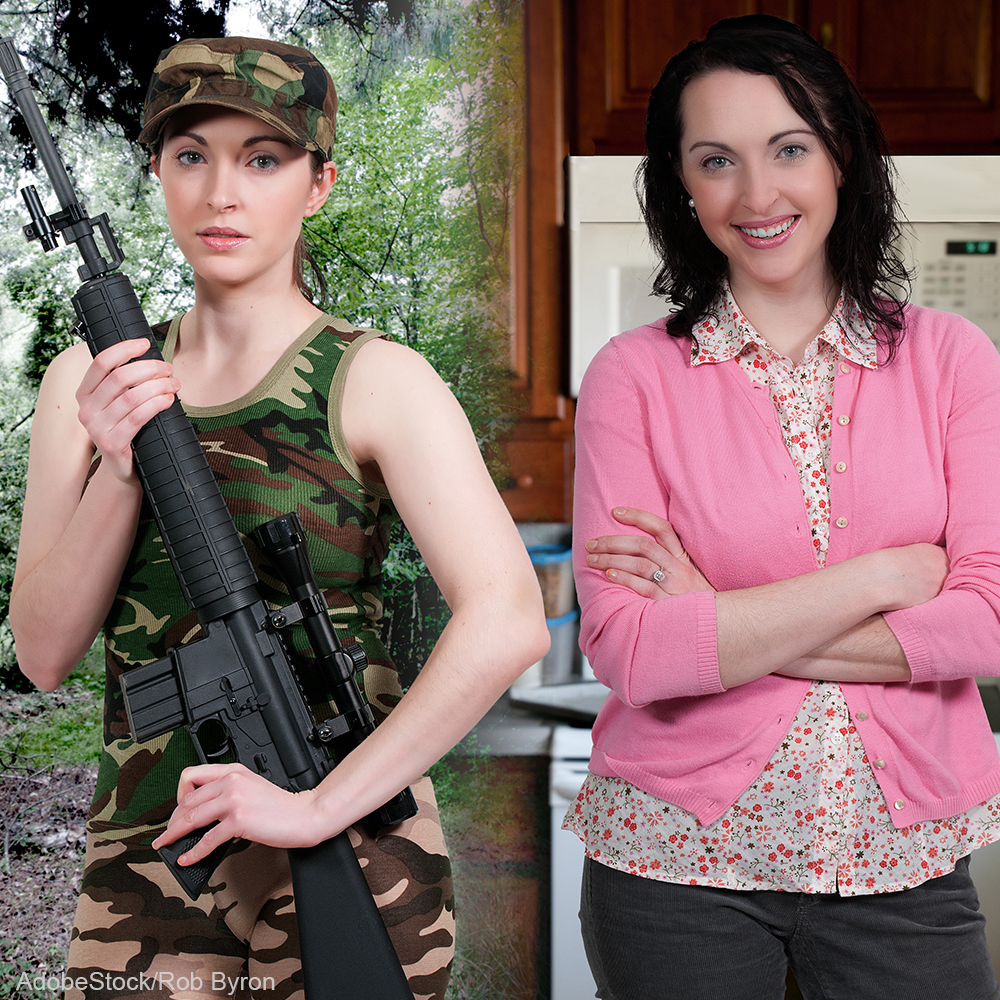 This one had to come in first place because it is just too awful for words. This is supposed to show a female soldier who is also a mother, but could even the photographer think this was a good idea? When did the Army switch to tank tops and leggings instead of fatigues? They aren’t even the same camo pattern! And from the way she’s holding that rifle, it’s doubtful this model has ever held a gun before. Is this really how we want to portray our female troops? I don’t know whether to laugh or scream. You decide.