A Rochester, New York, postal worker was out delivering the mail when one day when he saw something that make his stop dead in his tracks. As Robert Franklin dropped deliveries and packages on his route, he noticed somebody raising the American flag out of the corner of his eye.

The homeowner politely declined when Franklin offered his assistance, but the U.S. Army veteran wasn’t about to stand by and miss this important moment. 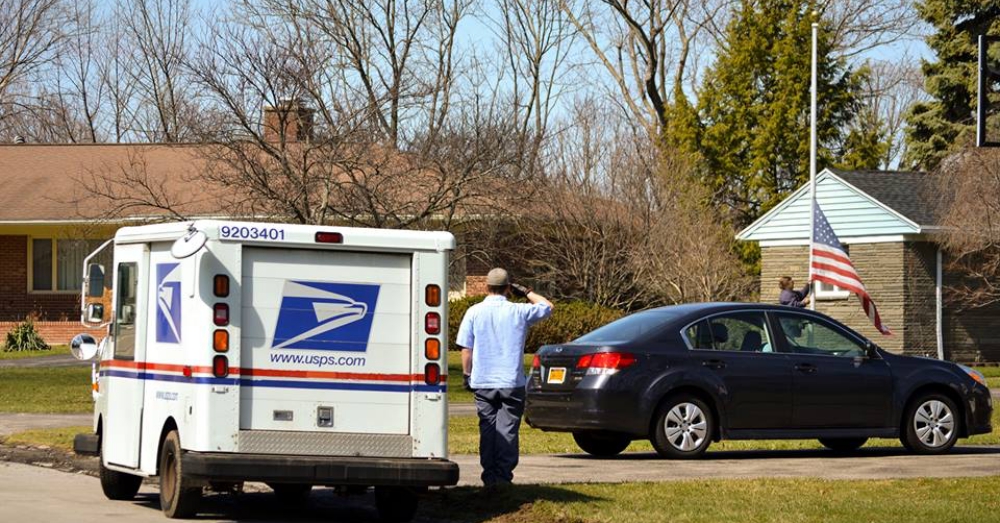 Rather than just drive off in his truck, Franklin stood by in a quiet salute until the flag was at full mast. The patriotic scene led one neighbor, Michael Lempert, to snap a photo of this touching scene.

“It wasn’t until I was at my driveway that I realized the USPS driver was not in the truck, but rather standing at attention next to it, saluting the flag my neighbor was raising,” Lempert remembers.

“I stopped right there and grabbed my camera off the seat next to me, took off my hat, and captured the moment.”

Once the flag was fully raised, Lempert walked over to Franklin to ask permission to post the photo online, and to thank him for his service. “Many thanks to retired U.S. Army sergeant Robert Franklin, who is still serving his country, rain sleet or snow,” Lempert continued. “He is the manifestation of true patriotism, and I am proud to have met him.”

However, Franklin didn’t consider this patriotic display above or beyond the daily respect he pays to the American flag.

“I hope it encourages other postal employees to participate and share flag etiquette,” he recounted to the news website Link. “It’s a way to show as an arm of the federal government, we are the stewards of these customs and courtesies.”

Others noted the neighbor’s luck at capturing such a special moment on camera. The online praise spilled over onto Reddit, where users also discussed flag-raising etiquette and whether or not Franklin’s action was appropriate.

“Veterans can choose to salute or place their hand over their heart, so no need for headgear or uniform unless you are active duty,” one commentator wrote.

“The guidelines for how to appropriately act during a flag raising are actually federal law,” another wrote. “Military and, as of 2008, veterans salute, all other persons place their right hand over their heart.”

What do you think about this story?