It’s surprising to think that there is no national museum dedicated to the Army, celebrating the men and women who have served, fought, and sacrificed as soldiers, but that’s been the case in America. In fact, despite being the oldest military branch, the Army is the only branch of the military without its own museum — until now.

After a great deal of planning and preparation, construction has finally begun on the National Museum of the United States Army. The complex, which will tell the history of the Army and its many brave soldiers throughout American history, will be located at Fort Belvoir, Virginia. It is expected to open in 2019.

The National Army Museum “will celebrate over 240 years of Army history and honor our nation’s Soldiers -– past, present, and future -– regular Army, Army Reserves, and the Army National Guard,” according to the museum website.

What’s especially exciting about the Army museum is what will be inside for visitors to see!

The museum will showcase the history of the United States Army from its inception during the Revolutionary War, throughout the past two centuries, and into the present. Situated on more than 80 acres of land at Fort Belvoir, the Army museum will have amazing exhibits with large-scale attractions, including military vehicles (like tanks!), artifacts, and more.

Along with all of the attractions inside the museum, including some never-before-seen Army artifacts, there will be exhibits and attractions outdoors, as well. According to ArmyTimes, the outdoor portion of the museum “will include an amphitheater, a memorial garden, a parade ground, and an Army trail.”

Learn more about the National Army Museum in the video below!

The Experimental Learning Center will perhaps be the biggest attraction for some at the museum. In this state-of-the-art facility, guests will be able to use hands-on modules and simulators that put them in the seat of an actual soldier. Attractions will include digital guides to help visitors get the most out of their time at the museum, including the Training Center.

According to the museum website, the Training Center will allow “visitors [to] engage in a series of digital, hands-on training exercises that mimic the experiences of Army Soldiers.”

This is sure to be an amazing and educational attraction for both children and adults to learn more about the men and women who defend our country by serving in the United States Army.

The Veterans Site will have more on the Army museum as construction continues and it gets closer to opening.

Take a digital tour of the Experimental Learning Center in the video below!

If you love the Army as much as we do, you will absolutely want to get this ornament for the holidays! 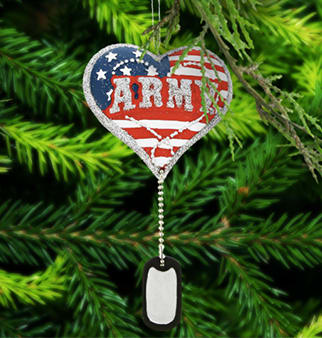 The stars and stripes displayed proudly on this sparkling ornament serve as a symbol of true patriotism. The ornament is heart-shaped with a dog tag hanging underneath.

Celebrate the holidays with the pride that you carry throughout the year for your country and your solider!