The Arlington National Cemetery is truly sacred ground. It is the final resting place for over 400,000 of our nation’s military, some of whom have been buried there since the Civil War.

The grounds were originally the property of the family of Confederate General Robert E. Lee’s wife, who was also a granddaughter of George Washington. When the Civil War broke out, the Union took the property and almost immediately, Union soldiers began being buried there.

Every day Arlington National Cemetery sees dozens of new burials and provides each fallen service member or veteran with the pomp and circumstance, the honor and dignity they are due for having honorably served this grateful nation. The beautiful tree lined boulevards and the broad green burial grounds in each section, echo regularly throughout each day with the sound of 21 gun salutes and the mournful, somber notes of taps. Over 4 million people visit this sacred place each year.

Back in 1948, General Hoyt Vandenberg, the then Chief of Staff for the Air Force, and his wife, Gladys, were in the habit of routinely attending funeral services for Air Force active duty servicemen and Air Force veterans. They noticed that some of those services only had a military chaplain present. Gladys Vandenberg was moved by the loneliness of those funerals and began to invite some other Air Force wives to attend services as well. Eventually, she organized a group of women that would regularly volunteer to attend Air Force funerals to ensure that no one would be buried alone. She called the group the Officer’s Wives Club.

In 1973, Julia Abrams, the wife of Army General Creighton Abrams, founded the Army version of the Air Force group. The Navy started their own organization in 1985, and the Coast Guard formed its own group in 2006. These groups are collectively known now as “The Arlington Ladies.”

The Marine Corps does not have a similar group as it sends a representative of the Marine Corps Commandant to every Marine funeral. Each of the Arlington Ladies groups is unique to its own branch of service, but they provide similar volunteer services.

All of the Arlington Ladies have some direct connection to their particular branch of military service. Most are the wives and some are the daughters of either active duty service members or military veterans. Their dedication is legendary. They attend funerals, no matter the weather, just as the military honor guards do.

Doreen Huylebroeck, whose husband, CPO Edward Huylebroeck, is buried at Arlington National Cemetery, is a Navy Arlington Lady. She began volunteering after her husband died. She never saw herself doing this, but was drawn into it by the invitation of others. She thought that she would not be able to control her own tears at the funerals but finally responded to friends invitations and began to volunteer with the Navy Arlington Ladies group about two years ago.

Huylebroeck told a Stars and Stripes reporter, “The military person is a hero and he deserves it. It’s just a special way to honor him and be there.”

On average there are about six Navy funerals a day. Huylebroeck and the other Navy Arlington Ladies volunteer regularly for half a day at a time. They schedule it so that one volunteer attends all of the Navy funerals in the morning and another takes all of the afternoon funerals. They meet with the families before the services in family rooms that Arlington National Cemetery has set aside for that purpose. They are an official part of each funeral.

Huylebroeck goes the extra mile. She reads the obits before meeting with the families so that she will be able to talk with them about familiar things. If she finds that the family is local, she offers her personal contact information to them, in case they want to talk to outside of the family. She even offers to place flowers at the grave on birthday or anniversary dates. She pays for this herself.

“It’s the least I can do, I would appreciate it if someone did it for me,” she told Stars and Stripes.

That is the embodiment of the Golden Rule, “Do unto others as you would have them do unto you.” 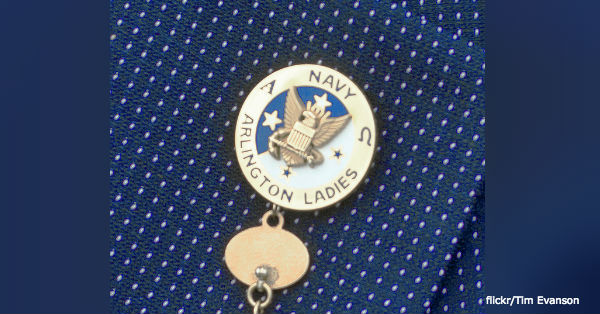 Huylebroeck estimates that she has attended over 500 funerals at Arlington. One of those she attended was for Mark Mayo, a sailor I wrote about for this site. Mayo was killed on duty defending his shipmates and his ship, the USS Mahan, from an armed man who had gotten aboard while it was docked at Naval Station Norfolk last year.

These Arlington Ladies who represent the Air Force, the Army, the Navy and the Coast Guard provide an incalculable service of care and comfort to the fallen and to their grieving families at Arlington. They have made it their duty to make sure someone is in attendance at every funeral, especially at those where there is no family to bury the deceased. This unique voluntary service offered by these women honors the service and the sacrifice of our military. They thank those who have served with the simple gift of their presence. In a way they are not only standing in for their particular branch of service, but for all of us.

The Veterans Site would like to offer its thanks to the Arlington Ladies for what they do out of love for our military members and their families. Your presence at the fresh graves of our fallen active duty service members and military veterans honors their service and their sacrifice and helps to bring some measure of solace to their families. We thank you for the immeasurable service you bring to all those buried at Arlington National Cemetery.